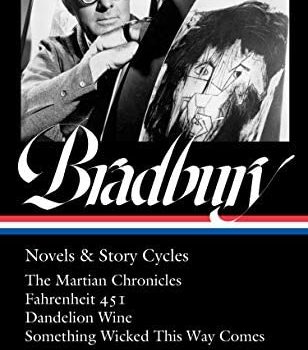 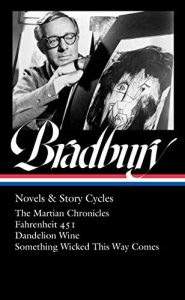 No one can complain that they’re having a hard time finding Ray Bradbury stories to read… The exhaustive ISFDB lists more than 30 col­lections published in the current century alone, including the massive Bradbury Stories from 2003, which managed to assemble no fewer than 100 stories without repeating any of the 100 sto­ries that had already appeared in The Stories of Ray Bradbury way back in 1980. For the more scholarly minded, Jonathan R. Eller, the author of a fascinating three-volume biography of Bradbury, has been editing a multivolume critical edition of The Collected Stories of Ray Bradbury, complete with textual variants, commentary, and related nonfiction, and Volume 3, which appeared in 2017, only gets us up to 1945. So the obvious question is, who really needs the two-volume, 1,800-page Ray Bradbury Collection from the Library of America, also edited by Eller? And the answer, I think, tells us something about the most productive ways in which we can read fiction from the past.

Two important points, one involving the Library of America (for which I’ve edited a few volumes), and the other involving Bradbury. First, the Li­brary of America, despite often being compared to the French Pleiades series of classics, is really less a matter of institutional canonization than of curation; the idea is to present significant works in reasonably accurate annotated editions, not to lecture us on what to read. Second, Bradbury’s legacy isn’t merely a pile of stories lined up like an endless salad bar, but rather a series of collections and novels in a particular sequence, and very much of their time. So the real value of The Ray Brad­bury Collection is that we get to read the major Bradbury books as they were read by the original audiences. The first volume, published in 2021, includes The Martian Chronicles, Fahrenheit 451, Dandelion Wine, and Something Wicked This Way Comes, while the second, published in October, features The Illustrated Man, The Oc­tober Country (complete with Joseph Mugnaini illustrations), and a selection of 27 other stories. 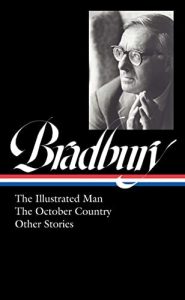 This provides a much more coherent way of making sense of Bradbury. For example, those wondering why the sentimentalist Bradbury is often cited as an influence in horror fiction can get a clear sense of his darker side from The October Country (still my favorite of Bradbury’s books), or from the rather jaundiced view of childhood in stories from The Illustrated Man (“The Veldt”, “Zero Hour”). A couple of stories in that same collection are set on Mars, but excluded from The Martian Chronicles because they didn’t fit into its overall narrative arc. Still, they make clear that Mars was always for Bradbury a metaphorical space, a way of commenting on racism (“The Oth­er Foot”) or censorship (“The Exiles”, a clear link between the Martian stories and Fahrenheit 451). The 27 stories selected from Bradbury’s many other collections include familiar classics such as “The Pedestrian” and “A Sound of Thunder”, but the latest story dates from 1969, when Bradbury’s influence (if not popularity) had already begun to wane. As always with the Library of America, the end matter and text notes are worth checking out; many who first encountered Bradbury through the popular collections R Is for Rocket and S Is for Space might be interested to learn that the stories were bowdlerized by editors seeking to make them more appropriate for a younger audience. Bit of an ironic fate for the author of Fahrenheit 451.

This review and more like it in the January 2023 issue of Locus.