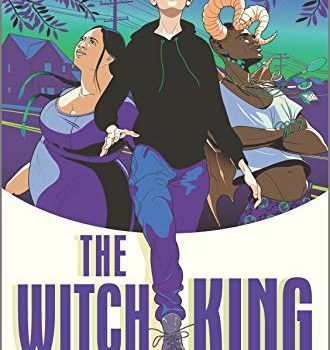 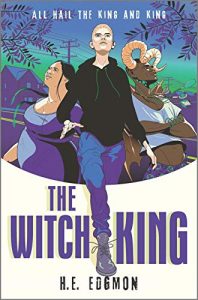 Wyatt Croft is angry. Born a witch in the king­dom of Asalin, a magical realm hidden inside our own, Wyatt was raised at the bottom of the social hierarchy. Witches are the “corrupted” and “abnormal” children of the fae. Where the fae can do big, powerful nature magic, witchcraft must be taught and controlled. His whole life he was told he was inferior, that his only value was as mar­riage material. As a child, he was paired off with the heir apparent, Prince Emyr, and segregated from the other witches. For years, Wyatt stifled his growing anger, until he can’t any more. In a fit of rage triggered by a violent assault, Wyatt burns part of Asalin to the ground, then flees to the human world. There, he eventually finds safety in a new found family of kind humans. With their support and protection, he is able to come out as trans.

His story doesn’t end there. H.E. Edgmon’s The Witch King is a story about transitions, not just of gender identity but of one’s sense of self, of relationships, of culture and community. All of these transitions have already begun when the book begins, but each are on different stages of their journey. Wyatt has been living mostly comfortably as a trans boy. He’s had relationships with other boys, and even a fleeting one with Briar, the daughter of the family that opened their home to him. When Emyr shatters Wyatt’s protec­tive bubble and demands he return to Asalin to complete their marriage contract, Wyatt believes he’s returning to a close-minded society stuck in outdated ideologies. He’s right, and he’s wrong.

Emyr, with the help of some rebellious witches, wants to reform Asalin into a more inclusive society. “Reform” being the key word. Small changes have already been enacted. The witches blend their craft with technology in innovative ways, and Emyr is developing new programs and policies to bring Asalin into the modern era. Witches are coming out of the closet, too, some­thing unimaginable when Wyatt was growing up. Emyr wants gradual progress toward equality while Wyatt, still fueled by fury, wants to burn it to the ground, metaphorically and literally. This conflict becomes a chasm between the betrothed teens; they’ll never be able to come together without Emyr truly listening to Wyatt and Wyatt sharing his truth with Emyr.

Emyr’s progressiveness puts him at odds with the more conservative fae, and Wyatt’s short emotional fuse makes him an easy target for those who want to disrupt Emyr’s rule. This is where H.E. Edgmon takes his book from fun queer young adult fantasy to biting social com­mentary. Their story hits hard and cuts deep. It’s relentless and unapologetic in insisting on never letting others dictate your identity and on standing strong in your truth.

Wyatt’s anger is rooted in trauma, physical and psychological, and he lashes out in ways that feel true to teenage behavior. He’s shortsighted and self-centered, not out of arrogance or malevolence but for survival. Emyr has coasted through life on a wave of privilege, but even his princely status cannot exempt him from bigotry stemming from his parentage. Briar, as the Indigenous daughter of activists, is treated by the fae like a sidekick, but she is a lot cleverer and more aware than they, including Wyatt, give her credit for. Wyatt and Emyr come into conflict with fae who want to see the crown turn coldly conservative and the witches subjugated even further, as well as witches who see Wyatt as too untrustworthy to bring into their revolution.

Edgmon delves into topics like colonialism, racism, classism, and queer/transphobia, using the fantasy playland as a way to peel back the layers of our world and expose the rot underneath. The fae think of themselves as better than humans, but they are just as corrupt and prejudicial as we are. They have turned witches into second-class citizens who can be executed for even the slightest infraction. Throughout all this, the voices of the marginalized are always centered, many of whom have intersec­tional marginalized identities. We have fae and witch characters who are fat, acespec, gay, trans, nonbi­nary, disabled, Black, Indigenous, Asian, adopted, etc. The fae world reflects the real world, which is a nice change of pace from fantasy’s tendency to portray them as tall, slender, white people.

The Witch King is a novel that demands rather than requests. It understands without making ex­cuses. It is a scream at a cliff’s edge at midnight and a brass-knuckled punch to the face. It is lonely queer teens building a family with each other in a world that does everything to break them down and split them up. It’s up there with The Scapegracers, A Song Below Water, and Legendborn as one of my favorite recent young adult fantasy series.