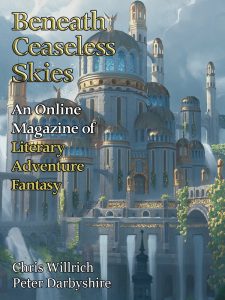 Cast of Wonders had a busy Septem­ber, thanks largely to its celebration of Banned Books Week. Before that, though, Riley Neither took the stage with a short story of family and grief in “A Portal”. Set on a world far distant and now cut off from Earth thanks to the portal that linked to the two worlds being severed, the story centers a boy who has lost one of his mothers, this new grief a layer on their old one of losing their home. Neither does a beautiful job of evoking distances that cannot be meaningfully crossed, that leave people sepa­rated, if not quite alone. While distances can be weights, not all of them need to be burdens, and there is a promise to the prose and the characters as they hold on to what they have and remember what they’ve lost. Moving into Banned Books Week properly, EJ Delaney’s dystopic “Forbid­den Voices” treads similar ground to Bradbury’s Fahrenheit 451, but instead of censorship run rampant, copyright law is weaponized to benefit the wealthy and corporate who wish to wring every penny from authors and readers alike. In that world, Iolanda dreams of poetry, remembers a cousin who was a poet who wanted to believe in the freedom of language, only to fall victim to the corruptions of greed and profit. In the face of a nightmare of corporate law, Iolanda fights back the only way she feels she can – by joining an illegal underground library. It’s a chilling reflection of a world where words are only worth what the wealthy will pay to own them utterly, and laws are enforced up to and including rip­ping poetry from people’s minds and memories. Delaney sharply captures the danger of banning books, but in a way that manages to subvert and complicate the work already done in that area.

Shifting to Cast of Wonders’s sibling publication, Escape Pod also had a strong close to September with Brian Hugenbruch’s “The Princess, NP”. Set deep in space, Jana is a Data Princess – a person tortured and conditioned from a very young age to be a kind of living computer, able to process data and sense things far beyond ordinary humans or even AI. Indentured, she’s been trying to buy out her contract by being profitable enough to the Queen who made her, but when the opportunity arises to guarantee her own freedom, she hesitates. Not out of love of the job, but because it would mean betraying a part of herself and becoming the very thing she hates. The story, setting, and characters all come together wonderfully, and while Hugenbruch doesn’t provide an uncomplicated triumph for Jana, the story itself is very much a winner.

Strange Horizons closed out September with a pair of issues full of some very moving poetry. “Redbud” by Samantha Pious revolves around relationships, with the narrator and their partner in a world full of change and uncertainty and the narrator discovering that change inside them coming out as flowers that grow more and more undeniable. Their partner finds them a place to be with others similarly and suddenly botanical, and Pious powerfully looks at love and change and the fear that touches relationships when one person experiences something profoundly transforming. It’s a careful and beautiful poem that explores joy, community, and connection. The publication ended the month with a special issue focused on extractivism, a concept well known to science fiction and reality both, where places are reduced to the resources that can be mined from them, and technology made possible only through a kind of exploitation of the natu­ral. It’s a theme that Umang Kalra confronts in “Epistolary Poem”, a piece that speaks of protest and exhaustion in equal measures. Kalra finds a struggle and inside that a familiar cycle of people speaking out against injustice and against the colonialism that feeds diaspora. The poem echoes this long history of the epistolary form, conscious that the themes its tackles are not new, but aware as well that they are still vital, still necessary and strong and powerful. The title implies that the poem might be impersonal, generic, but the reality of it is deeply personal and moving and tired in a way that speaks loudly to the need for expression, for protest, and for parties in the silencing weight of exploitation and empire.

Moving into October but sticking with Strange Horizons poetry, Xander Gershberg’s “Code­name Beast: a sestina” is a formal poem after my own X-Men-obsessed heart. It explores the identity of Henry “Hank” McCoy, otherwise known as Beast, as he explores the politics of identity, both racial and sexual, always centered on his own (white, likely straight) self, claiming a marginalization that isn’t his in an intellectual way that imagines Otherness as all one thing. Underneath what might be a Bad Take from Beast, though, Gershberg dives deep into fear and loneliness, into avoidance and pain that is legitimate and real, if also entirely fictional. I love it. Moving at last to fiction, R.S.A. Garcia tells a fascinating kind of time travel story in “12 Things a Trini Should Know Before Travelling to a Back in Times Fete™”. The story imagines a temporal tourism, where people can travel back into the past of Trinidad and Tobago to partake in Carnivals full of music and dancing. And of course, there are complications to doing so, what with the racism and racist violence of the times. Garcia does a careful job of pulling apart very complicated ideas, neither flattening the experience of going back in time as inherently insensitive or tasteless, nor ignoring the real and terrible consequences that the pro­cess flirts with. Rather, the story recognizes the commercial interests at work while also showing that engaging with the past, especially one ripe with injustices, can be a way of celebrating and centering survival and joy, and remembering a history that should not be forgotten.

Beneath Ceaseless Skies kicked off October with a special anniversary issue, which meant double the fiction. Though a larger issue, it was lacking none of the tightly linked thematic elements that I always appreciate from the publication. And to celebrate another year of stories, there were four tales that looked at religion, gods, fate, and futility. Of the bunch, Y.M. Pang’s “The Mountains My Bones, the Rivers My Blood” is likely my favorite, with a heavy longing in the god Caenlux as he finds the responsibilities of his role wearing more and more on him, at least until a young god-killer named Armind finds him and opens a new chapter in his life of obligation and yearning. It’s a lovely and beautifully woven story of time, love, and the unbreakable rules of the universe that can still at least be bent from time to time. Moving out of the special issue and the second October release was a pair of stories about old adventurers finding their past catching up with them in unexpected ways. And I’m always happy to find a new work by Chris Willrich (even if it’s not starring a cat), who did some careful character work and world building in “Magog’s Pond”. In it, Persimmon Gaunt and Imago Bone return to look into a potential curse that turns out to be older and much larger than either of them suspects. It’s a lively mystery with touches of horror, and the chemistry between Gaunt and Bone keeps the action contained and wrenching all the way through.

Recommended Stories:
“Forbidden Voices”, EJ Delaney (Cast of Wonders 9/22)
“12 Things a Trini Should Know Before Travelling to a Back in Times Fete™”, R.S.A. Garcia (Strange Horizons 10/22) 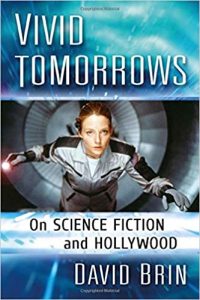