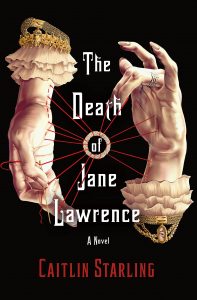 Caitlin Starling’s The Death of Jane Lawrence is a horror Gothic with romance elements that relies on much more than atmosphere and a crumbling manor to hook readers and keep them glued to the pages. Between dark magic and gore, this is a novel with a historical angle that feels like a classic but reads like some of the best contemporary horror.

Jane Shoringfield has lived with the Cunninghams most of her life and loves them to death, but now that they’re planning a move, she has to either go with them or find a suitable husband and stay where she wants to be. After coming up with a list of possible husbands she thinks would be willing to listen to her proposal of a marriage of convenience, she settles on Augustine Lawrence, a handsome, reclusive doctor who’s relatively new in town. After a lot of convincing – and after she works with him for a day – Augustine agrees, with one condition: Jane can never visit Lindridge Hall, Augustine’s crumbling manor, which is just outside of town. Unfortunately, heavy rains wash out the road and make it impossible for Jane to return to town after their dinner at Lindridge Hall following their wedding. After being forced to return to the Hall she finds a different Augustine that the one she left, and he explains he was afraid Jane was an apparition. When Jane is forced to spend a second night at the manor, she starts seeing things. There’s something unnatural at Lindridge Hall, something that affects Augustine a lot, and Jane wants to get to the bottom of it. When some doctor friends of Augustine show up unannounced and initiate Jane into the world of magic, a series of revelations will prove that Augustine is not who she thought he was… and everything specter she sees in the dark hallways and rooms of Lindridge Hall is real, and there for a reason.

The Death of Jane Lawrence is wonderfully creepy. Starling has a knack for atmosphere and tone, and they are both dark and gloomy from the start. Then, she sprinkles in gory passages of Augustine digging into sick bodies with his bare hands, mysterious rituals, discussions about arcane knowledge and magic, and a heavy dose of ghosts and hauntings. The end result is a novel that easily overcomes the issue of pacing – which is an element of all Gothic horror novels and not a problem with Starling’s writing – and keeps readers turning the pages because they know each chapter will bring a new revelation, a bucket of blood, or an apparition.

Gothic horror relies heavily on a strong sense of place and an atmosphere that makes you feel an unshakeable sense of unease, even when you don’t know exactly why. Starling excels at both things. Furthermore, Jane is a practical, smart woman, so when things get weird, she refuses to give in or panic, so as things get worse, they are amplified by her previous denial. Similarly, Lindridge Hall is everything a quintessential crumbling manor should be: cold, somewhat dirty, abandoned by its previous residents, closed to the world, dark, and possessing closed rooms. Everything Jane experiences in the house is accentuated by Starling’s descriptions of the place, which eventually make Lindridge Hall a character in itself:

She took her emptied dishes to the kitchen, then retrieved her books and repaired upstairs, forcing herself to turn down every light on the way. In the study, she added logs to the banked coals and tended the hearth until between it and the gasolier above, the room was warm and bright. She ignored the strange shadows cast by the skulls on the shelves and settled down at her desk.

Romance is at the core of this narrative, but not the kind that romance readers are used to. Yes, there is tension, brief touches that light up Jane’s heart, a growing love and admiration for each other despite the marriage being mostly a business arrangement, and jealousy once Augustine’s secret past comes to light, but none of that manages to describe the way Jane and her new husband interact, how they get to know each other, and the kind of love that pushes Jane to do everything in her power to save Augustine from the dark forces that haunt him.

Despite all the elements discussed so far, The Death of Jane Lawrence is very clearly a horror novel, and the author added enough ghosts and gore to prove it time and again:

But Jane couldn’t move, and so Abigail grabbed her wrists and dragged her close, forcing her hands into her abdomen. The flesh parted, revealing a skull festooned with rot, worms writhing in every crevice, every shadow. Slick ropes of intestines wound around her fingers while her thumbs pressed into the dark, impossible softness of the skull’s eyes. It wasn’t an unborn child, but the head of a full-grown person, erupting into reality and dying before it could be born.

The Death of Jane Lawrence is set in a bizarre, much darker version of post-war England, and that time and place give it the last element it needs to clearly state it is a Gothic horror. However, this is Gothic horror reinvented and adapted to modern sensibilities. Starling is one of the new leading voices in horror, and with this novel – which will surely collect many accolades – she cements her position as an engaging storyteller who’s not afraid to inject freshness into a classic subgenre. 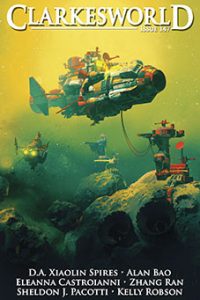 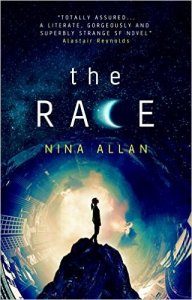