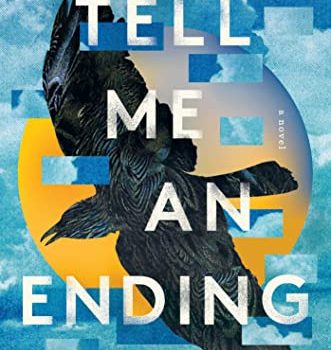 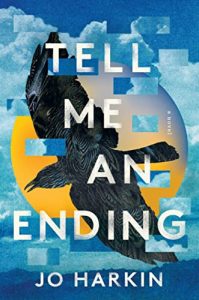 Somewhere, I imagine Jo Harkin has a book­shelf groaning under the weight of Norton anthologies – at least 2 volumes. I believe this not just because her bio says she studied literature at uni, but because her debut novel, Tell Me an Ending, delicately honors classic narrative structures that are rare in contemporary science fiction.

In an alternate present, memory deletion, as portrayed in the 2004 film Eternal Sunshine of the Spotless Mind, is not only possible, it’s been monopolized by the mega-medical corporation Nepenthe. The procedure, of course, has not been without its hiccups and scandals. At the start of Tell Me an Ending, Nepenthe doctor Noor Ali is contending both with clients who want the procedure, as well as with clients who have had the procedure in the past who now want, using a brand new procedure, the process reversed. It’s made especially complicated by the fact that half of Nepenthe’s clients, the ‘‘self-confidential,’’ wanted, as part of their memory deletion, the fact that they had a memory deletion itself deleted.

Noor does not do well with complicated. She’s brilliant, but closed-off; watchful, but exhausted by continually analyzing and re-analyzing the ac­tions and reactions of her co-workers and clients. It’s never explicitly mentioned whether Noor is on the spectrum – which this reader appreciated, as it doesn’t really matter for the actual story. What does matter is how her observant abrasiveness closely knits together the four other point-of-view characters. She is the key to the other characters’ mysteries.

There’s Mei, an early twenty-something spin­ning her wheels in Singapore after dropping out of college. She’s deeply troubled, clinically depressed, and haunted by flashes of Amsterdam – a city she’s never been to – and by snatches of a conversation she is sure she’s never had. Across the world, in the UK, former police detective Wil­liam has been forced into retirement and broken up his marriage. Though he’s seen all variations of horror, a single crime photograph from a case he hadn’t even been assigned brought on a severe, mind-boggling case of post-traumatic stress. Irish architect Finn always found joy and meaning in his passionate marriage to the love of his life, even as they moved from familiar environs to the desolate Arizona desert. Now Finn’s found out his wife had a self-confidential deletion, and the possibilities of what traumatic memory his wife would have wanted to eliminate slowly drives a wedge between them.

Finally, there’s walking palimpsest Oscar, with a well-funded bank account but no idea why his balance is so high – or who he is. All he knows is that he’s probably in danger, there’s people after him, and he has to keep moving.

It’s hardly unusual to have a polyphonic novel. But, sprawling as these multiple arcs feel, Harkin holds tight control over Tell Me an Ending. It’s a nod to early Modernism and before, that each of these far-flung points are inex­tricably connected, using coincidences and coupling that nears feeling close to an old-fashioned deus-ex-machina. All roads lead to Noor, who, herself, begins to struggle with her role, directly or not, in all of the other characters’ situations, as well as the greater philosophical is­sues at play.

This overt philosophical musing is Harkin’s nod to classic Greek and Roman literature. Heady topics are directly ad­dressed, as opposed to merely suggested by context, by characters throughout: whether memory makes the self, or if the self is inherent; if it’s possible for medicine to do no harm, or just reduce harm; and who gets to define harm and who benefits by that definition.

As all the characters converge – some via the actual Nepenthe clinic where Noor is based, oth­ers through fate and small-world relationships – tension is high. An explosive climax is expected. But we’re in the hands of a writer with a literary long view. Rather than give us the explosions and suggestive ending of a contemporary novel, Harkin seizes the opportunity to subvert expecta­tion and end on the slow burn of the Victorians. While, yes, each character does find some sort of resolution, it’s a meticulous build, with a strik­ingly long denouement. Not all is well at the end, but we get to see the characters after the end, and how (most of them) rebuild their lives. Given that so much of Tell Me an Ending pivots around the levers of what makes us human, what makes us individual, and what constitutes a good life, the extended come-down is deeply satisfying.

Tell Me an Ending is a great read. It’s not always an easy one, but it’s an excellent first work by a promising new author. It’d make a great gift for that English major in your life that claims to like everything, but turns up their nose at genre. Convert them to fandom without them even realizing.

Rich Horton Reviews Short Fiction: F&SF, Uncanny, Interzone, Galaxy’s Edge, Not One of Us, and Others 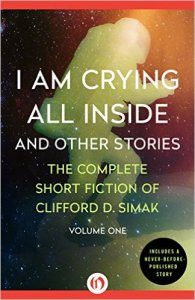