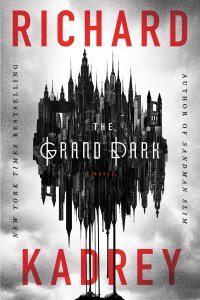 The history, culture, folklore, politics and superstitions of Middle Europe — otherwise Central Europe or, more exotically, Mitteleuropa, countries including Germany, Poland, the Czech Republic, Austria, Slovakia, Slovenia, Hungary, Switzerland, Croatia, Bosnia-Herzegovina, Montenegro, Serbia, the Republic of Macedonia, and Albania — offer a rich mine of narrative and thematic possibilities. The same goes for the lands of Eastern Europe. However, it seems to me that fantasy by Anglo-Americans generally overlooks this motherlode. One can point to Avram Davidson’s The Enquiries of Doctor Eszterhazy, and to Eric Kelly’s excellent YA novel The Trumpeter of Krakow. I suppose Dracula and his heirs must shoulder the burdens of representing Transylvania and environs. Theodora Goss brings her characters to this region in European Travel for the Monstrous Gentlewoman. John Crowley’s Ægypt Cycle has some good sections set in Prague. Although happening mainly in Russia, the first book of Moorcock’s Pyat sequence, Byzantium Endures, had some of the feel of a Middle European outing, and I seem to recall similar frissons with his The War Hound and the World’s Pain. Surely two preeminent works by non-Anglo-Americans — Grass’s The Tin Drum and Kafka’s Complete Stories — represent the quintessence of such tales. But compared to the thousands of fantasy books with Western European settings — consensual or counterfactual — the genre pickings are slim.

But now Richard Kadrey utilizes this rarely deployed otherworldly ambiance and tradition in an alluring New Weird manner, giving us a novel that goes much deeper that any kind of Weimar Republic-Sally Bowles pastiche. His book dramatically and effectively conjures up the sensations of life in an imaginary smallish country and city akin to Budapest or Warsaw, Vienna or Kiev, Belgrade or Bucharest, all viewed aslant. Not quite a pure dystopia, it’s rather a naturalistic and sophisticated tale concerning the moral and ethical compromises all adults face, well-stocked with eccentric and compelling characters, quirky backstory, odd technologies, suspenseful moments, and emotional payouts.

Our venue is the city of Lower Proszawa, a patchwork of incongruent neighborhoods — rich and poor, elegant and louche, industrial and homey — that somehow, through the deftness of Kadrey’s narrative, come to form an utterly believable and organic place. We might imagine the state of this world to resemble ours in the 1920s. There has been a Great War which devastated and impoverished much of the populace: the Iron Dandies, war-wounded survivors hiding their scars behind metal masks, are daily proof of that. The sister city, High Proszawa, twelve hours away by slow boat, is an uninhabited wasteland, prowled only by scavengers and plague victims. But Lower Proszawa currently maintains a certain lively if haunted equilibrium. Mara robots drive taxis. Chimerical organics serve in carnival sideshows. An odd power source named plazma is coming online. Jobs get done, cafes are full, and the scandalous productions of the Theater of the Grand Darkness — the Grand Dark for short — attract packed houses.

Our hero is one Largo Moorden, a young bike messenger. Growing up in one of the city’s worst sections, he has managed to lift himself out of the slum with this demanding but easily comprehensible job. He has his own small apartment, a mild but unshakeable addiction to morphia that leaves him perfectly functional (he says), and a beautiful, vivacious girlfriend named Remy, an actress at the Grand Dark. Largo is content with these few comforts and obligations, seeking nothing more. But then his boss at the courier company, Branca, surprisingly promotes him to chief messenger. This is the point where Largo’s life begins subtly to go off the rails.

His new and curious assignments take him to meet revolutionaries and munitions magnates, among them Remy’s sinister uncle, Baron Hellswarth. Some of his fellow messengers try to harm him, and rogue Maras chase him down the wharves. The productions at the Grand Dark become esoteric and predictive of actual events. Remy starts to experience fits. Has she contracted the plague? Largo could deal with one or two of these troubles, but together they begin to unnerve him. Then a linchpin of his life is removed. He becomes hunted by the authorities, and believes that only a trip to High Proszawa can help him. He barely escapes alive, having learned more than he wished to learn. And upon his return he must confront Branca, the Baron and other folks in power to save his own life and Remy’s. The odds are not in his favor.

The primary aspect of this book to admire, upon which its success rides, is the incredible cast of characters. First and foremost, of course, is Largo. A somewhat naive lad with a utilitarian attitude nurtured by his rough upbringing, he is not your typical Competent Man, nor is he a total innocent or simpleton. He’s a winning blend of heart and steel, laziness and ambition, generosity and selfishness. The rigors he undergoes refine his nature without demolishing it. Rather, Kadrey shows us the inner ratios of his soul shifting, some segments shrinking, others growing. It’s Largo’s odyssey from youth to maturity that powers the tale. Which is not to say that Kadrey does not also provide a really bountiful plot of political and personal machinations too, with plenty of surprises. All the other characters — from Branca the boss to Rainer, an Iron Dandy friend; from Margit the rebel to Ernst the newspaper editor; from Steinmetz the smuggler to Una the playwright — shine visibly on the page. The conversations among them are fresh and startling. Every exchange between Branca and Largo, for instance, possesses Vancian wit.

Secondarily, the cosmopolitan, decadent manners and mores of the city, tinged with the eldritch circumstances, are enrapturing. The naturalistic elements support the fantastical parts and vice versa. The proportions of the storyline are nicely balanced. The first third or so of the book is easygoing, and establishes the parameters of place and character. Things accelerate and compound up to about the three-quarter mark. Then the final quarter is all hell breaking unpredictably loose. A small coda confers well-earned closure to all.

Resonating with the work of both Richard Calder and Karel Čapek, The Grand Dark is Kadrey’s unique surreal take on whatever the opposite of a Belle Epoque might be: an era when only a hit of morphia, a set of brass knuckles, and a speedy bicycle can protect lovers from chaos. 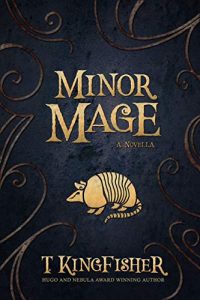