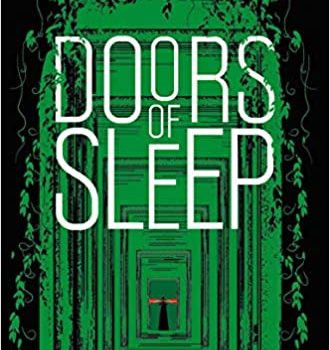 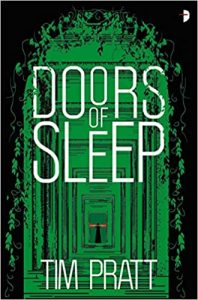 Tim Pratt’s last trilogy from Angry Ro­bot, the Axiom (The Wrong Stars, The Dreaming Stars, and The Forbidden Stars), was precisely the kind of space opera romp guaranteed to delight me. Fast paced, and with a rag-tag crew of heroes and a selection of batshit weird dangers, it drove an appealing course through a galaxy not so very far away.

With Doors of Sleep, Pratt opens a new series, and although it’s far from space opera, its rol­licking pace and fiercely inventive worldbuilding makes it every bit as appealing.

Zaxony Dyad Euphony Delatree is very far from home. Every time he falls asleep, he wakes up in another universe, and has done so for ap­proximately the last three years. He’s fallen into over a thousand worlds, and then fallen out of them just as quickly. Along the way, he’s had a handful of companions – for he can take people with him, if he falls asleep touching them – but all of them have left him, or been left behind. One of them, a man known as the Lector, eventu­ally tried to vivisect him to uncover the secrets of his ability to travel. The worlds Zax passes through are varied in their technology and in­habitants, but frequently dangerous.

In a dangerous garden world, he meets Minna – who, eager to escape death for helping a stranger, agrees to travel with him. Together they encounter strangeness and wonder, until they meet an enemy with the ability to pursue them.

It turns out that the Lector managed to synthe­size a compound from Zax’s blood that allows him to share Zax’s ability, albeit temporarily. And he needs more of Zax’s blood to make more. The Lector, it seems, is mad in the megalomaniac way: he wants Zax’s blood so that he can conquer the multiverse, confident that one day he’ll be able to direct where he goes when he sleeps, and so return to enjoy his conquests.

Zax is against killing the Lector, believing that it would make him as much a monster as the Lector himself. Zax’s personal inclinations are to do as little harm as possible and, where he can, to make things better – a set of ethics that aligns well with Minna’s, though she is rather more willing to approach a more final solution for problems like mad scientist mega­lomaniacs. They flee, accompanied by a new ally, the crystalline intelligence Vicki. But the Lector is persistent, clever, and cruel, and when he traps Zax and Minna, he gets what he wants. The conquest – or at least the ravaging – of the multiverse is underway.

Separated from Minna by an uncrossable gulf of worlds, carried further every time he sleeps, Zax gives in to despair. The Lector left him alive because the dead don’t suffer, and he’s definitely suffering. But Minna is more resourceful than he’s given her credit for – and she has a plan.

Doors of Sleep is told in the first person, via the conceit that it is written in Zax’s technologi­cal diary. (Although it’s not always Zax doing the writing.) It’s a pleasant change to have a character in extreme circumstances who has real, fundamental ethical prob­lems with murder, and one whose first instinct is to try to convince people to be better versions of themselves, or help people improve things, despite how far he is from home and how unlikely it is he will ever benefit from this, person­ally. He could do almost anything and escape consequences, but he chooses not to. Minna, too, is appealing: she’s not well travelled, but she’s smart and clever, and her ethics are essentially similar to Zax’s. Doors of Sleep touches lightly on ethical problems – it’s much more concerned with rollicking adven­ture – but where it does, it concerns itself with interpersonal responsibility and the question of behaving in a way that stays true to one’s own best self.

Doors of Sleep is a fast, fun, deeply entertain­ing romp, and it baits the hook of its conclusion with the promise of an even wider, weirder world to come. I recommend it highly. 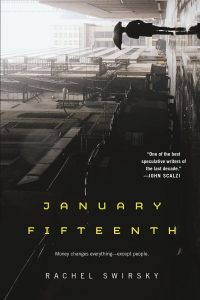