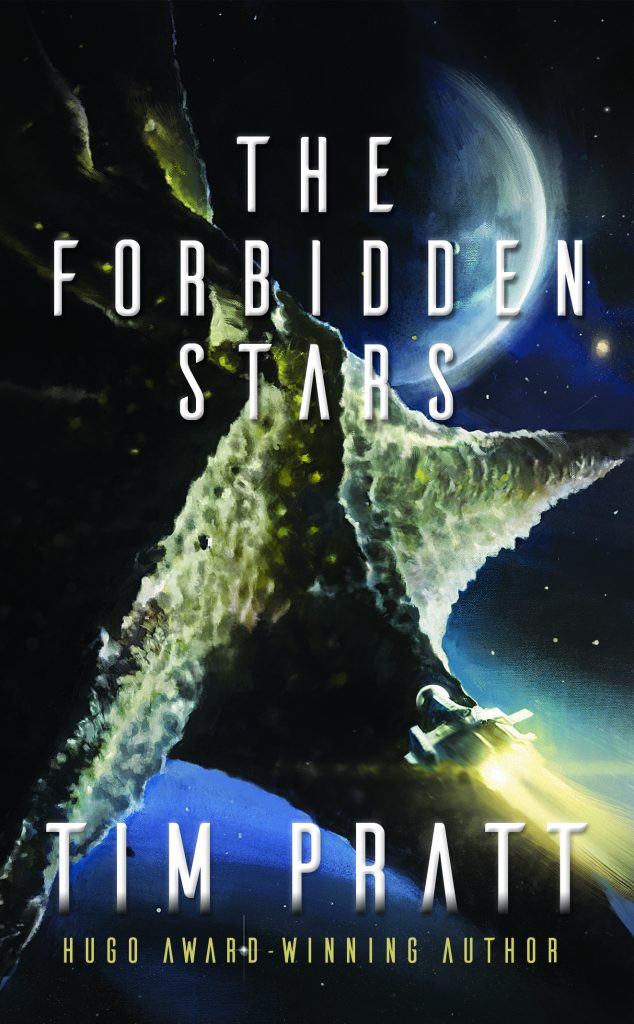 Tim Pratt has a new book coming out in October: The Forbidden Stars (Angry Robot), the dazzling space opera sequel to Philip K. Dick Award finalist The Wrong Stars and The Dreaming Stars! Here’s a first look at the cover, with art by Paul Scott Canavan.

From the publisher: The ancient alien gods are waking up, and there’s only one spaceship crew ready to stop them.

Aliens known as the Liars gave humanity access to the stars through 29 wormholes. They didn’t mention that other aliens, the ancient, tyrannical – but thankfully sleeping – Axiom occupied all the other systems. When the 29th fell silent, humanity chalked it up to radical separatists and moved on. But now, on board the White Raven, Captain Callie and her crew of Axiom-hunters receive word that the 29th colony may have met a very different fate. With their bridge generator they skip past the wormhole, and discover another Axiom project, fully awake, and poised to pour through the wormhole gate into all the worlds of humanity….

Jason Kirk is a senior editor for Amazon Publishing’s 47North and Skyscape imprints. Books edited by Kirk have won the Arthur C. Clarke, British Science Fiction Association, and UTOPiA Book of the Year Awards, and have been finalists for the Philip K. Dick and Bram Stoker Awards. Prior to joining Amazon Publishing in 2014, Kirk worked in magazine publishing and music journalism for 15 years. Aside from his interest in

tangled up in "-punk"