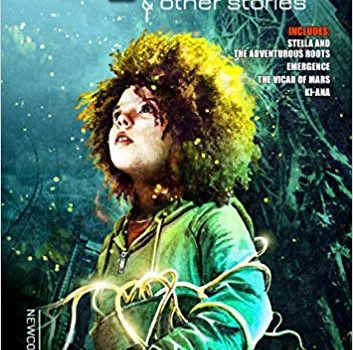 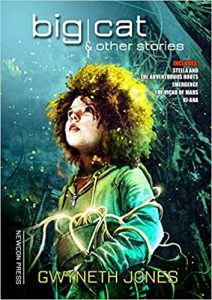 Gwyneth Jones has been writing fiercely intelligent SF for decades, and, despite a few high-profile awards (a Clarke, two World Fantasy Awards, a BSFA, a Tiptree, and a Philip K. Dick), she never seems to have attained the broad, appreciative readership that her fiction warrants (in 2001, she even received one of the short-lived Richard Evans awards for the “insufficiently recognized,” an honor that probably every writer feels they deserve, but that must come with mixed feelings for the honoree). Part of the reason may be the sheer information density of her novels and stories, which despite a consis­tently lucid and shapely prose, tend to put complex and conflicted characters into equally complex and layered environments, with little concession to convenient infodumps and traditional character arcs: there’s never only one thing going on in a Jones story. This is clearly evident in her new collection Big Cat and Other Stories, her first since The Universe of Things back in 2011. The 11 stories date from 2007, and five are from original anthologies edited by Jonathan Strahan, who has been a consistent champion of Jones’s work. Whether the collection will earn her a passel of new readers is anybody’s guess; as with M. John Harrison and a few others, those who appreciate her work really appreciate its unique qualities, while others just might long for the more straightforward plots of her Ann Halam novels for younger readers. Nevertheless, the best stories in Big Cat and Other Stories are rewarding in ways that are peculiar to Jones, even though they may seldom play out in ways that the initial premises might suggest.

For example, the title story “Big Cat” seems to begin as a straightforward mystery: a farmer finds a dead wolf on his property in Cornwall, with a nearby footprint of what seems to be an enormous cat of some sort. As the story unfolds, though, we find we’re in the eco-rock ‘n’ roll global warming future of her Bold as Love novels, with its balkan­ized Britain dominated by various green, “Counter­cultural” alliances and resurgent ancient rituals. As some principal characters from those novels set out to investigate what is happening, we learn that the real mysteries involve why there are wild wolves and giant cats in England at all, and what that implies about a changing world. Jones often opens a story in a way that evokes crime or mystery writing. The title character in “The Vicar of Mars”, one of two stories set in Jones’s Aleutian universe of inhabited worlds from her White Queen trilogy, sets out to offer his services to a reclusive old woman who has apparently come to Mars to die, and discovers her involvement in an ancient tragedy, but much of the story’s resonance comes from conversations between the “high priest” and an alien adventurer named Conrad, and from echoes of classic ghost stories. The other Aleutian story, “The Ki-Anna”, involves a young woman setting out to investigate the suspicious death of her twin sister on a war-torn alien planet, where the sister was working on an ambitious “Atmosphere Recovery Project” – but the project, and the politics behind it, thrust us into unexpected complexities involving the whole Aleutian universe.

Jones does enjoy playing with various genres, but never simply as pastiche. “A Planet Called Desire”, from Gardner Dozois and George R.R. Martin’s Old Venus, an anthology meant to celebrate the Venus of pulp SF (before we discovered it was all superhot crap), actually figures out a way to have its hero visit the Venus of the primeval past, but that hero, a billionaire adventurer and philanthropist, comes straight out of the pulps, and his adventures involve some surprisingly frank encounters with a sensual lizard-woman, as though Jones is out to unpack the eroticism that almost no pulp writers (except pos­sibly Moore and Brackett) brought near the surface. “The Old Schoolhouse” visits Lovecraft country in telling of a musician going through the effects of a fa­mous composer whose airliner has disappeared, but Jones’s treatment of the mysteries of contemporary composition and notation are far more sophisticated than “The Music of Erich Zann”, the only HPL tale it really calls to mind. The only story original to the book is the delightful “Stella and the Adventurous Roots”, which not only displays Jones’s talent for goofy comedy, but revisits the alien-fauna territory of Day of the Triffids, which is briefly referred to in the story.

If we were to try to ravel out Jones’s favorite themes on the basis of this collection, they would be the ideas of information space or “i-space” and the possible permutations of emergent AIs. In the note introducing “The Flame is Roses” (a title borrowed from T.S. Eliot, who indirectly figures in the tale), Jones defines i-space by asking, “What if thoughts and feelings, flesh and blood, sub-atomic particles and prehistoric tombs, are all made of the same basic stuff, let’s call it information – and with the right equipment this stuff can be manipulated?” The story that follows features some unpleasant-sounding eye-worms that are supposed to enable a kind of telepathy, but centrally involves an archeological dig which hopes to detect some of this psychic stuff in an ancient Megalithic tomb; this may be one of those tales which leads off in so many potential directions that readers couldn’t be blamed for feeling a bit left in the parking lot. A more accessible version of a kind of i-space might well be the environment of online gaming, and this provides the setting of two stories, “The Seventh Gamer”, in which a classically trained anthropologist (who cites Levi-Strauss and Malinowski) tries to explore the world of a game called Darkening World, only to learn that some of the non-player characters may be ominously more than they seem. In terms of ideas, it’s a more pro­vocative story than “Cheats”, the one Ann Halam story here, but “Cheats”, in which a brother a sister use their coding skills to escape the programmed scenario of an adventure game, only to find surprises, has the advantage of the more conventional plotting of the Halam stories for younger readers.

Both of these stories also imply the possibility of AIs becoming emergent in such artificial envi­ronments, but the notion of emergent AIs is more powerfully explored in two of the strongest stories here, “Brick, Sticks, Straw” and “Emergence”. The former, which takes the familiar remote presence idea (made too familiar by Avatar) and explores what might happen if a solar storm disrupts communica­tions between the robotic software clones, exploring Jupiter’s moon Callisto, and their human operators; the result is a kind of existential crisis among the robots, who rather ingeniously reflect aspects of their human operators. “Emergence” even more pointedly describes the dilemma of a magistrate, herself centuries old as a result of repeated longevity treatments, who must decide an appropriate punish­ment for a rogue emergent AI, whose malleable perception of time complicates matters. As with many Jones stories, there are enough ideas here for a novel – which takes us back to my original point: the density of invention in her best stories can be at once brilliantly provocative and challenging to the casual reader. That may not be a recipe for broad popularity, but it’s certainly the sign of a highly original and memorable voice, which isn’t quite like that of anyone else in SF. 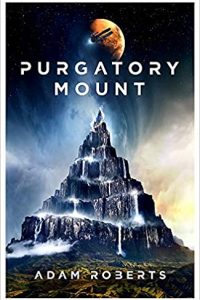