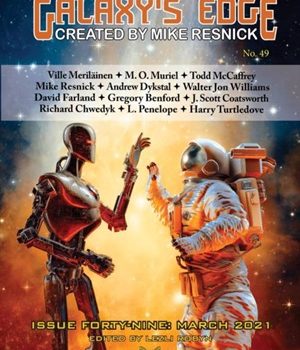 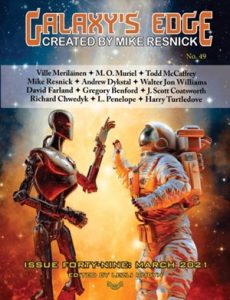 Pulp Literature remains a favorite small magazine for me. I don’t often mention their two ongoing “serials”: “Allaigna’s Song“, by JM Landels; and “The Extra” by Mel Anastasiou – both are enjoy­able. The first is secondary-world fantasy, the second is crime fiction set in Hollywood in the ’30s, so not SF. I quite enjoyed the latest episode, “Frankie Ray, Sleuth with Star Quality“, with heroine Frankie Ray on the lam from a false murder charge, forced to do a screen test and publicity shots while posting as a man. It’s good fun.

Of the SF/F stories this issue, I enjoyed Erin K Wagner‘s “The Hunter Undead“, a dark story about a contemporary Icelandic woman who replaces her ailing father on a puffin hunt, and encounters scary echoes of Grettir’s Saga as she seems to flicker into Iceland’s past. And KT Wagner offers “Winter’s Flower“, about an old woman named Gerda, long ago spirited away to Canada to escape the Snow Queen, and her sudden realization that a boy named Kay is again in danger. It’s an intriguing variant on the Anderson story.

I recently reviewed an issue of the newish magazine Fusion Fragment, and here’s another one. I thought this a bit better. Two stories that intrigued me end in an oddly similar manner, though they are otherwise not much alike. “Animal Hour” by Ian Donnell Arbuckle opens with the narrator at his girlfriend’s grandmother’s funeral when the corpse disappears. It turns out corpses everywhere are disappearing, and things soon get worse. It’s mostly a quiet story about a college kid dealing with a quiet and never explained apocalypse, and it handles atmosphere and character nicely. In “Otherwhen” by Zandra Renwick, “Chrono-displaced” people are “flicker­ing” into the present – apparently from the future. But the result is usually tragic, and what’s going on is hard to figure out. Elizabeth is one of the present-day “Chrono-affected” – she happened to run into a Displaced girl with her car, and now she visits the injured girl in the hospital obsessively. Elizabeth has her own issues, and an attempt to understand her Displaced victim, perhaps to make amends, seems to give her life meaning… leading to an inevitable ending. Another nice story is Spencer Nitkey‘s “Winter’s Song“, about a boy on a ship fleeing a ruined Earth, hoping for “a new home in the sun,” as Neil Young put it, whose grandmother teaches him “transmogrification.” To be honest, I didn’t buy the concept of transmogrification as shown, but the boy’s relationship with his grandmother, and then its effect on the end of the ship’s long journey, was quite moving.

The most enjoyable story in Galaxy’s Edge for March is a rather madcap piece from M.O. Muriel, “A Matter of Time“, in which Mada must deal with disturbing evidence of clocks drifting, a very dangerous thing in her particular world, which is a sort of weird and frothy steampunkish concoction. The story doesn’t really cohere in the end, but it’s fairly bouncy fun along the way.

The New Yorker‘s March 8, 2021 issue includes a very fine new story from Jonathan Lethem, “The Crooked House“, which, as the title suggests, is based on the famous Heinlein story. Lethem expands on this in an online interview in which he identifies the anthology in which he read Heinlein’s story (Other Dimensions, edited by Robert Silverberg, which I bought and read at about the same age Let­hem did), and in which he claims to be writing stories based on other stories from that book, including R.A. Lafferty’s “Narrow Valley”. In Lethem’s story the “crooked house” is a much larger building, created by an obsessive architect to be a community resi­dence, to let “refugees of late-stage capitalism par­ticipate in the wonders of hybercubic spatiality.” But of course the building collapses, creating a weirdly interconnected structure. Mills, an environmental analyst, finds a way into the house and then can’t find his way back out, as he searches for the mother of a former student of his. His wanderings and musings seem to reflect, perhaps, the environmental weird­ness of Los Angeles, or his own disconnected mental state – it’s a pretty worthwhile story. 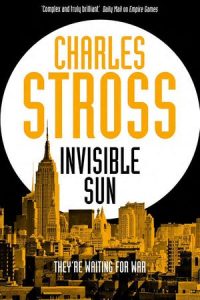 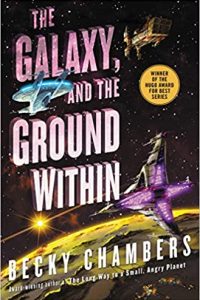 Adrienne Martini Reviews The Galaxy, and the Ground Within and A Psalm for the Wild-Built by Becky Chambers