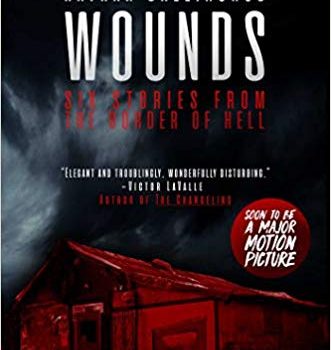 Nathan Ballingrud, Wounds (Saga 4/19) This collection – “Six Stories from the Border of Hell” – gathers some of the author’s best dark work, including original story “The Butcher’s Tale” and “The Visible Filth” (2015), adapted as 2019 horror film Wounds. His first collection, North American Lake Monsters (2013), won a Shirley Jackson Award and was nominated for British Fantasy, Stoker, and World Fantasy Awards.

Ashok K. Banker, Upon a Burning Throne (John Joseph Adams Books 4/19) The bestselling Indian author breaks ground on a new epic fantasy duology, the Burnt Empire, with this hefty and engrossing volume. His new series reimagines the Mahabarata as a struggle between two brothers (one blind, one albino) and a demonlord who seeks to undermine their rule by preying on the prejudice of the population.

Lara Elena Donnelly, Amnesty (Tor 4/19) The third and final volume in the Amberlough Dossier series (after Amberlough and Armistice) offers a dark and complex conclusion to the spy thriller about resistance fighters in a decadent city inspired by interwar Berlin. The fascist government has fallen, but the new world order brings problems of its own. “A satisfying conclusion to a set of books stuffed to the brim with detail and machination.” [Katharine Coldiron]

Sylvain Neuvel, The Test (Tor.com Publishing 3/19) The author of the innovative interplanetary Themis Files series proves equally adept at stories on a smaller stage with this tale of near-future immigration dystopia. Iranian immigrant Idir sits down to take his British Citizenship Test, but the situation in the exam room takes a horrific and disturbing turn.

K.J. Parker, Sixteen Ways to Defend a Walled City (Orbit 4/19) Parker (a pseudonym for Tom Holt) is a master of thrilling tactics, brilliant strategy, and the human errors that ruin both. His latest concerns Orhan, a colonel of engineers horrified to find himself the highest-ranking military figure in a city under siege. “As with most of Parker’s work, there is a melancholy undercurrent that gives the humor weight.” [Adrienne Martini]

Gareth L. Powell, Ragged Alice (Tor.com Publishing 4/19) This fantasy police-procedural mystery novella follows Welsh DCI Holly Craig as she uses her psychic powers to investigate a series of murders in her home town that may have links to her past.

Alastair Reynolds, Permafrost (Tor.com Publishing 3/19) One of our finest SF writers brings us a near-future tale of time travel, with scientists from 2080 reaching back to 2028 in a desperate attempt to prevent a global catastrophe. “An enjoyable, engaging, and thought-provoking novella, and one whose conclusion leaves room for ambiguity. I admire it… if you like precise, elegant, nail-bitingly tense science fiction, I recommend it.” [Liz Bourke]

Jack Skillingstead, The Chaos Function (John Joseph Adams Books 3/19) War reporter Olivia Nikitas discovers strange technology beneath an ancient site and uses it to bring a loved one back from the dead… but in changing the past, she alters the present for the worse, bringing the world to the edge of catastrophe. The guardians of the technology aren’t too happy with her, either. Olivia’s “internal journey moves the novel away from a mere thrill-ride – though even the toughest connoisseur of rollercoasters will not be disappointed by the scary bits.” [Russell Letson]

Bruce Coville has been working to turn young readers on to science fiction for nearly three decades, most notably with his bestselling My Teacher is an Alien series. His most recent novel, The Last Hunt, provided the long overdue conclusion to his Unicorn Chronicles quartet. He has a second life as founder and publisher of Full Cast Audio, and has produced over 100 audiobooks, directing and/or performing in most of