Chambers’s character-driven first novel focuses on a woman joining the diverse crew of an aging spaceship that has been offered a dangerous job making hyperspace tunnels between worlds. Originally self-published to consid­erable acclaim – nominated for the Arthur C. Clarke Award, the British Fantasy Awards’ Sydney J. Bounds Award for Best Newcomer, and even The Kitschies. Published in the UK by Hodder & Stoughton 8/15. ‘‘Chambers has created a world that both rips off and improves upon so many of the great space operas of the past.’’ [Adrienne Martini]

A spy called Kangaroo (he has a special ‘‘pocket’’ portal that allows access to an empty parallel universe) takes an mandatory vacation on a cruise to Mars and finds himself faced with murder and a conspiracy that threatens the peace between Earth and Mars. A very entertaining SF mystery/thriller and an impressive first novel.

Indian folkore and werewolves are twisted in fascinating ways in this impressive first novel. Set in India, the multi-layered story, rich in symbolism and vivid imagery, is told in large part through journal entries spanning centuries, transcribed by a modern-day his­torian. Originally published by Penguin India 4/15.

The latest year’s best from noted editor Datlow, this time covering horror in 2015 with a summation of the year by Datlow, and stories from authors including Kelley Armstrong, Laird Barron, Steve Rasnic Tem, and Neil Gaiman.

Hartley hits the heights with this suspenseful YA novel, his first for teens, the story of a tough young woman who makes a living repairing chimneys and towers in the culturally diverse city of Bar-Selehm – until her young apprentice’s suspicious death leads to a job investigating the boy’s demise and its possible link to a major theft.

A family takes a trip to the remote area known as the Loney, where people still cling to old superstitions, in this eerie tale, a power­ful first novel. First published in the UK by Tartarus Press in 2014; winner of the 2015 Costa First Novel Award and British Book Industry Début Fiction Book of the Year 2016. ‘‘In his first novel…Hurley delivers a haunting and powerful weird tale about religious faith and how it is used to control and make sense of forces that constantly resist it.’’ [Stefan Dziemianowicz]

Guy Gavriel Kay, Children of Earth and Sky
(Penguin/NAL May 2016)

Kay’s latest sweeping historical fantasy, set in the alternate Renaissance Europe of The Lions of Al-Rassan and the Sarantine Mosaic novels, follows an artist, a noblewoman turned spy, a merchant, a soldier, and a girl bent on revenge. ‘‘Kay’s great gift is to paint on a large canvas with tiny strokes – pre­cise and cosmic at the same time.’’ Cecelia Holland

One of fantasy’s most noted authors presents seven stories in this new collec­tion. ‘‘A rare new story collection is something to look forward to, especially when… it includes three previously unpublished tales, a long novella all but unavailable since its original 1994 publication, an essay by McKillip on high fantasy, and an appre­ciative and insightful afterword by Peter Beagle.’’ [Gary K. Wolfe]

The ninth and final book in the acclaimed Temeraire series opens with Napoleon’s disastrous midwinter retreat from Moscow, and the allies’ desperate at­tempts to stop him before he can regroup – or seduce all the dragons to join him with offers of new rights and powers. Plenty of action and some unexpected twists make this a satisfying end to the series.

Tim Powers, Down and Out in Purgatory
(Subterranean Press Jun 2016)

Powers’s notable talent for off-beat fantasy shows itself in this new fantasy novella about a man determined to get revenge on a dead man, enough to follow him to purgatory, ‘‘a posthumous revenge fantasy with minimal backstory, single-minded characters, and a setting somewhere between that of a medieval dream-vision and a Chuck Jones cartoon.’’ [Gary K. Wolfe]

Eigh­teen stories are gathered in this hefty restrospective collection of ‘‘the best’’ by one of SF’s noted authors of hard science fiction and space opera. Reynolds provides story notes for each.

A well-to-do family falls on hard times when the American economy collapses in this satirical, cautionary novel of an all-too-plausible future, a fascinating tale of a quirky, and unprepared, family just trying to get by.

Psychological and supernatural horror mix in this eerie novel about a teen’s disappearance from a local park. A disturbing new tale from a Stoker Award-winning author.

May 26, 2013 admin Comments Off on Online Periodicals, late May 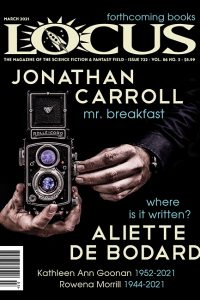 Our latest podcast features Cecelia Holland and Ellen Klages, both of whom write historical fiction as well as fantastic fiction. They will also both be at ICFA this week! In the course of this podcast they talk about doing research (Ellen focuses on the 20th century, while Cecelia usually works in more distant times), how our view of history is formed, and different ways of teaching and learning. [powerpress]