April 2014—
Issue 69
• This issue has stories by Richard Viskovic and Mick Spadaro.
• There’s also an interview with Tim Hehir, and an archival essay by Stephen Higgins. 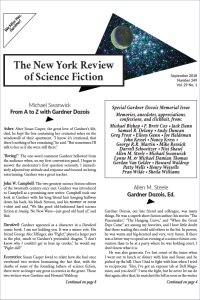 Alex Bledsoe was born in Tennessee, and grew up an hour north of Memphis. He studied journalism at the University of Tennessee from 1981-85, and went on to write for newspapers, work as a professional photographer, and do legal copyediting until becoming a full-time fiction writer.Bledsoe has published numerous short stories in various zines, starting in the late ’90s. His series of hardboiled fantasies featuring sarcastic ‘‘sword jockey’’ Eddie LaCrosse