Science fiction has always looked to the future, and famously even helped to change imagination into reality. Earbuds, hovercraft, even the Internet itself were all fiction, until one day they weren’t. But it’s a tall order for a writer to keep up with the future these days; the pace at which technology advances has become breathtakingly fast. You can write a novel incorporating only technologies and social practices that exist right now and have it read just like science fiction. (If you’re reading this, William Gibson, yes, I’m talking about you.)

Those futures aren’t always shiny and happy, nothing but Moore’s Law as far as the eye can see. Because science fiction and its readers, it turns out, love a good post-apocalypse just as much as a techno-utopia, and maybe more. (Perhaps this is the zeitgeist of our unprecedented time, when humanity is capable of literally destroying the world — and in more than one fashion.)

Very often these apocalypses happen right about now, and the ancient history in the story is from our own world and time. From Planet of the Apes to Mad Max, Shannara to Hunger Games, we have countless stories that focus on what rises from our own ashes; a multitude of futures-gone-sideways.

Once in a while, you get a story that does both at the same time. In the Serial Box science fiction thriller ReMade, our modern-day characters roam the ruins of a future they never lived to see — that thrived for hundreds of years, and then collapsed. There is no civilization risen from the ashes. There’s nothing, and nobody. How that came to be is one of the central mysteries of the series.

This premise creates some interesting challenges in world-building, though, because we needed to start with a vision of how our own world might evolve, and then we had to work out how much evidence of that society could survive the passage of time. We’re creating an archaeology, a puzzle, as much as we’re creating a cohesive vision of the future. And this presents an interesting technical challenge, because each piece needs to be evocative enough to add texture to the moment in the story when it appears, as well as serving as a window into the past for readers who revisit each clue afterward to think through its implications.

As always, the future starts with seeds planted in the present. How much of what we build today could last for a hundred years, or a thousand? Much of this boils down to a simple question of time and entropy. Fortunately there’s a lot of human history to draw from for research, which makes it easier to know how different types of material culture survive. We don’t have skyscrapers (or DVDs) that have been around a thousand years, yet, but we can definitely extrapolate. Stone lasts very well, and metal, if it won’t rust; wood and leather, less so; paper and fabric even less. We can be pretty sure that a standard American-style wooden-frame house wouldn’t age very well, so few of them would exist in the world of ReMade, if any. No sweeping subdivisions of ruined McMansions, then — unless they’d been newly built, or meticulously maintained somehow.

Except… building materials are always evolving, too, and not always for the more durable. Last millennium’s pottery has given way to disposable packaging, and it’s not a stretch to imagine a push toward completely biodegradable standards emerging in the next decades, which would in turn mean that little sign of a food culture could remain. Similarly, our asphalt roads would certainly not survive the thousands of years that Roman roads have. Even fifty years without maintenance is enough to reduce a modern road to rubble, if not erase it entirely. What about newer materials, though, like the electronics-laden modular panels designed by Solar Roadways? This is, again, a double act of futurism: first we have to decide the shape of the future, and then we have to decide how it would last.

In a sense, this is a tremendously tall order, because not every piece of cutting-edge new research pays off or reaches wide adoption. A lot of the things we expected out of the future by now have never come to pass, and probably never well. Think about the classic rocket jet packs, for example. But since we’re building an archaeology in ReMade and not a completely functioning society, we have a little more wiggle room. We can offer mere tantalizing glimpses of a future that might come to pass, without spending too much time working through the sociological or practical implications.

Here’s an example: imagine that humanity created entirely new species of animals through genetic engineering. It’s not too much of a stretch; we’re already at glow-in-the-dark mice right now. Perhaps our scientists of the future brought back extinct species, like the sabertooth tiger. Or perhaps they created entirely new animals, as companions or novelties. Dragons kept as pets. Carnivorous rabbits. We don’t need to work through the ethical consequences, or changing opinions on pet ownership via environmental or animal rights lenses. We can simply posit that they existed.

Then we move on to the next step. Given such creatures, what would happen to them once humanity was gone? Surely some of them would go feral, and even out-compete native wildlife. New ecosystems would develop, dominated by new apex predators.

There’s also room for mystery. Not everything we describe should be legible to the twenty-first century mind. I don’t know about you, but I look around my house sometimes and wonder what each item would tell the archaeologists of the future. Even if it survived intact, would someone a thousand years in the future understand the printer on my desk? Would it be even theoretically possible to play the DVDs, or rescue data on my hard drive? What would they make of the slinky, or the Funko dolls? Or in the case of ReMade, would someone from right now be able to understand a computer interface designed two or three hundred years into the future?

Given that even a hundred years have made once-commonplace objects like buttonhooks or mysterious, definitely not without a lot of study. Even rotary phones and floppy disks can be a puzzle to those of us born after they fell out of common use.

Finally, of course, there is the question of our machines, and what life they might make for themselves beyond us. We move through an increasingly automated world. Airplanes need a pilot to fly them as a mere formality these days, and cars are rapidly heading in that direction; timers and motion detectors control lights, heat, cameras, and more. One can imagine Roombas diligently cleaning as long as they function; automated monorails running as long as they have power, their doors opening and closing for no passengers.

But the machines that we create to run the world for us are getting smarter and more useful all the time, and so this is ReMade’s biggest act of futurism. Perhaps our machine-servants will become so capable that they could run whole cities without us. These caretakers would clean, repair, manufacture — even, perhaps, each other. For a while.

What happens to these caretakers, though, left unattended for long enough? What might they look like five hundred years after humans are gone, or eight hundred years? How would they behave, and what would serve as their motivations?

On the ReMade creative team, we’ve chosen more than one answer to these questions. Because time is not kind to the things that humans make, and all our toys and tools break down in the end. But how they break? There are a million stories in that. 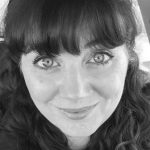 Andrea Phillips is an award-winning transmedia writer, game designer and author. Currently she co-writes the serials Bookburners, about a black-ops magic hunting team working out of the Vatican, and ReMade, an SF thriller about a group of teenagers who die and wake up in a world full of ruins and murderbots. Her debut novel, Revision, is about a wiki where your edits come true. Her nonfiction book A Creator’s Guide to Transmedia Storytelling is used to teach digital storytelling at universities around the world.
Andrea has also worked on interactive projects such as iOS fitness games Zombies, Run! and The Walk, The Maester’s Path for HBO’s Game of Thrones, human rights game America 2049, and the independent commercial ARG Perplex City.
You can find Andrea on Twitter at @andrhia. I mean, if you like that sort of thing.