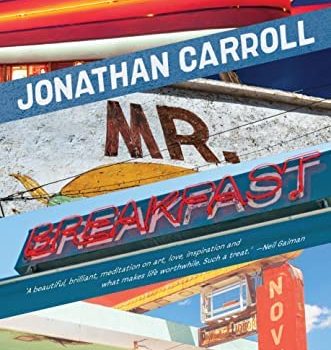 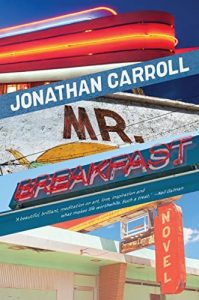 With all of the original and idiosyncratic voices in SFF these days, it’s tempt­ing and maybe a bit lazy to casually describe an author as sui generis. But when folks have been saying this for more than 40 years, as is the case with Jonathan Carroll, it begins to sound like a pretty solid verdict. No doubt this has from time to time befuddled those charged with figuring out how to market Carroll’s unique mixture of the mundane and the metaphysical, and it leads me to wonder if this has something to do with the fact that Mr. Breakfast is just now appearing in English, even though it has already been published in Polish and Italian in 2019 and 2020. This has nothing to do with the quality of the novel, which seems to me more moving and focused than Bathing the Lion back in 2014, and which is packed with familiar characteristics: sudden time shifts, the nostalgic landscapes of middle America, mysterious tutelary figures, encounters with earlier selves, photographs and tattoos, and, inevitably, very ingratiating dogs. It even includes some subtle allusions to his own earlier work. By any measure, this is vintage Carroll, which is another way of saying it’s entirely new.

The story is framed by a journalist interview­ing an elderly woman named Ruth Murphy about her relationship with world-famous photographer Graham Patterson, whose best-known work is a photo of an abandoned roadside diner with a faded sign reading ‘‘MR. BREAKFAST.’’ (Car­roll’s descriptions of Patterson’s photos, a couple of which sound vaguely like Gregory Crewdson, are so compelling that I’d love to see them, but at the same time I hope that no one actually tries to duplicate them. That’s the magic of imaginary art.) We then shift to Patterson’s own narrative in which, as a failing comedian, he wanders into a tattoo parlor in rural North Carolina and impulsively decides to get a strange tattoo – a bee inside a frog inside a hawk inside a lion – from Anna Mae Collins, who turns out to be his first mysterious tutelary figure. She later explains that she learned the magical tattoo from a Japanese master, and that it enables him to ‘‘visit each of your parallel lives three times and return here a fourth and final time, if you need it.’’ But he’s only an invisible observer in each of those alter­nate lives, and at some point will have to choose which of the three lives he wants to remain in permanently. In addition to his present life as a failed comic, another timeline has him becoming hugely successful by doing much edgier comedy as ‘‘Mohawk Patterson,’’ while a third has him settled in marriage with his old girlfriend Ruth (the same Ruth we met in the frame story).

This, of course, invites comparisons with a whole tradition of ‘‘road not taken’’ tales, includ­ing Borges’s ‘‘The Garden of Forking Paths’’, the 1998 film Sliding Doors (both of which Carroll cites when discussing the novel in his March 2021 Locus interview), and others. But the premise also permits all sorts of unexpected variations, as fairly recent examples like Chris­topher Priest’s The Separation or Jo Walton’s My Real Children demonstrate. Carroll uses the conceit not only to open up Patterson’s own life choices, but those of Ruth, his Greek former lover Antheia, and the journalist James Arthur, who at first seems merely to be Ruth’s interviewer. Even minor secondary characters, such as a young woman who tries to attack Pat­terson’s son in a playground, get backgrounds that imply whole stories in themselves. There are a few Easter eggs for veteran Carroll readers: when Patterson finds himself back in his old high school, it’s in Crane’s View NY, which featured in The Marriage of Sticks and The Wooden Sea; another character quotes a line from Glass Soup; a boy’s favorite book is The Land of Laughs (though it’s credited to ‘‘Marshall France’’); Patterson recalls meeting a woman named Elizabeth Thug (the title of a Carroll short story). So the interwoven multiple lives of the main characters in Mr. Breakfast also weave their way into Patterson’s other worlds, and the sense of infinite possibility – which after all is main appeal of Road Not Taken stories – is exhilarating, even through the novel’s somber, sad, or occasionally sentimental moments. While Carroll seems pretty disciplined in following the rules laid out in the beginning by the tattooist Annie, the experience of following Patterson’s life in all its permutations can sometimes feel, as one character says, ‘‘like tying water in a knot,’’ which, come to think of it, is pretty much what trying to explain what any Carroll novel feels like. Fortunately, the effect can be both wistfully melancholy and downright joyous.