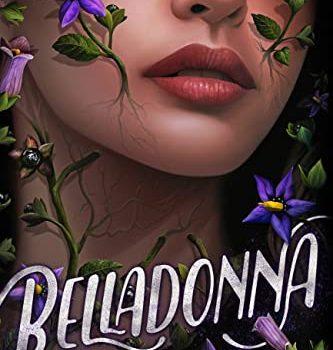 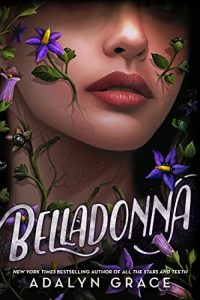 In Adalyn Grace’s historical fantasy Belladonna, 19-year-old orphan Signa has a problem with Death. He seems to be stalking her, following her from one complicated family situation to another, and always leaving a body behind. She can see Death, she talks to Death, but she doesn’t understand his motivations or how the two of them have formed an unsettling bond. Signa wants to marry an appropriately conventional man, and live the proper life of a young woman of means and social standing as dictated in a treasured etiquette book that once belonged to her mother. She wants to stop seeing ghosts, stop talking to Death, and stop being a source of suspicion among those who know her complicated (and dead body-laden) past. The problem is that her current guardian was horrible and Signa has just accidentally killed her. Now she’s on the move again and can’t mess up. Thorn Grove should be her final family situation before she comes into her inheritance, and she wants to make that suitable match, get on to her happily ever after. The problem is that Death is already at the new house because someone there is dying – and just like that, Signa has another problem.

Belladonna is obviously a fantasy – Death can’t be a major character in a book without it being fantastic on some level. But even as Signa comes to understand more about how and why Death is part of her life, the investigation into what is happening in her new home moves to the forefront and places the novel quite firmly in murder mystery territory. Her new guardian is the widower of her mother’s late cousin Lilian, who died recently from an un­known and horribly painful disease. Now Lilian’s daughter Blythe is suffering from the same ail­ment. Because of insight from Death, Signa soon deduces that poison is at the center of the sickness, but the how and the why and, most importantly, the who behind it all is unknown. Some serious sleuthing is required, all while Signa continues to be the appealing young heiress preparing for her debut. The suspects come fast and furious as questions mount about various family members, friends, and staff. There’s a bit of Downton Abbey drama to be found in Thorn Grove, which is loads of fun, while Signa’s confusing relationship with Death provides proper romantic intrigue. Don’t forget the secret passages, fraught social encoun­ters with local mean girls, and the amiable ghost in the library. It’s all quite exhausting, but Signa can’t rest – she has to get to the bottom of things and save Blythe. And also find a guy. Or maybe the guy is already in front on her. Hmm….

While Signa’s escalating ‘‘will they or won’t they’’ repartee with Death makes for plenty of romantic tension, it’s her role as a girl detec­tive that elevates Belladonna’s narrative. The mystery is just so good, and how she gets to the bottom of it provides plenty of drama. The final pages yield hints at another mystery (there’s a fresh dead body, so a sequel better happen!), and Grace makes clear that Signa is ready to embrace a role far beyond the one she expected to inhabit. (Etiquette book be damned!) This one is lots of fun and well worth sharing with friends so you can talk about it later. 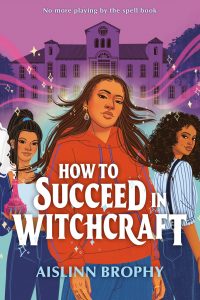 Alex Brown Reviews How to Succeed in Witchcraft by Aislinn Brophy