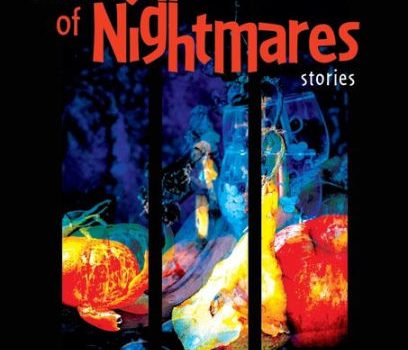 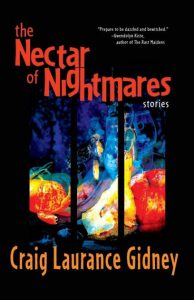 One of the coolest things about reading books with reviewing in mind is that you think about them critically, looking for ways to talk about them once you finally sit down to write your review. I did a quick trip to New York City recently, and Craig Laurance Gid­ney’s new collection The Nectar of Nightmares was one of the books I took with me. I read a few stories between the airport and the plane, and I was hooked. I had a few stories left as I walked around New York City, and I kept thinking about words that would accurately describe this book. Whimsical, dazzling, interesting, and weird all worked, but they also fell short. I needed something better, maybe something unique that spoke of the way Gidney mixes race, magic, and the LGBTQ+ experience in his fiction. Then the universe threw a good word at me, a word that fit perfectly. I was walking out of the Guggenheim Museum and saw a young Black woman walking towards me. She was wearing a pink T-shirt with a word in black letters emblazoned across her chest: Blacknificent.

The Nectar of Nightmares contains 14 stories that mix together magic, horror, identity, myths, and elements of fabulism to deliver a collection that feels cohesive and showcases Gidney’s storytelling chops. The tales take place in dif­ferent places and times and feature everything from magical humans to speaking animals, but regardless of their form and the characters at their core, they all share a few elements, like justice and otherness, that demonstrate Gidney is always in control and wants to say more with his short fiction than what’s on the page.

Discussing every story here would be impos­sible, but there are a few that stand out and merit individual attention. The first one is “Myth and Moor”, which chronicles the adventures of a young woman and her pet dog as they discover that sometimes the truth you find when you go looking for answers is much worse, and far stranger, that you could have ever imagined. Gloomy, strange, and a bit creepy, this story sets the atmosphere for the entire collection.

The second story that stuck with me was “Underglaze”, which follows a woman who acquired some plates at an estate sale. On the surface, this is one of the least complex tales in the collection, but it is executed perfectly and feels like something entirely new and also like a haunting tale of transformation, perpetuation, and stories of cursed family heirlooms that have been told so many times that they now reside in some form in the collective consciousness. Besides that wonderful mix, the way Gidney uses color in the narrative makes it simultaneously pretty and slightly creepy. In a way, nothing awful happens, but the changes in color and the invasive way in which some plates momentarily take over a woman’s life and affect everything in it, quickly turns into a commentary about the power of the supernatural and the way small events can have huge consequences.

Lastly, I want to talk about a story that is the crowning jewel of this great collection: “Black-Winged Roses”. A historical fiction story with an array of poetic and magical elements that put Blackness and the struggles of the LGBTQ+ com­munity at the core of the narrative, this story is the first one I would give to anyone who isn’t familiar with Gidney’s work because it is full of all the things he does well. The story follows a young woman full of magic who lands a gig playing the piano and singing at an LGBTQ+ club a few decades ago, when such clubs were completely unacceptable. Gidney uses this premise to deliver a story that shows how treatment of the LGBTQ+ community hasn’t changed all that much. From hateful comments and slurs to persecution by the law and people hurling Bible quotes at queer folks – “A woman shall not wear a man’s garment, nor shall a man put on a woman’s cloak, for whoever does these things is an abomination to the Lord” – this is one of those stories that make you wish the past was more in the past and less of something you see alive and well every day. Beautiful, hor­rendous, touching, magical, and packing a superb ending, this is a great story that proves Gidney is a great storyteller who understands how short fiction that entertains and makes the reader feel things can also be extremely political and make as many statements as it wants to.

While there are no throwaway stories here, what The Nectar of Nightmares work as a whole is much more important than any of the stories by themselves. When people talk about otherness in certain spaces – literature, for example – they usu­ally describe groups like BIPOC and LGBTQ+ writers in a way that sounds like those two things make up monolithic identities. In this collection, being Black and being a member of the LGBTQ+ community go hand in hand, just as in real life, and that’s what makes Gidney’s work required reading in these troubled times. 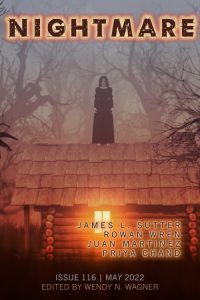