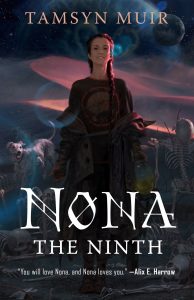 I must cop to my biases right off the bat: I am a hardened and unrepentant Locked Tomb fanboy. At first I resisted Gideon the Ninth, the way one does when absolutely everyone is saying, “This thing is so great, you’ll love it,” and one was an angry teen punk contrarian still struggling to find joy in life.

But when I fell, I fell hard. The complicated social structure and messy magic system – rooted in characters I adored – and despised – and despised and then adored – told in a voice that combines flowery-high-fantasy speak (“In the myriadic year of Our Lord – the ten thousandth year of the King Undying, the kindly Prince of Death”) with vibrant modern slang (“Gideon was experiencing one powerful emotion: being sick of everyone’s shit”)…. Yeah. A kink I didn’t know I had.

I think my lack of objectivity here actually makes me the perfect person to talk about the third book in the series, because if you’re not already a fan, this is not the place to start. Go directly to Gideon the Ninth. If you love it, read Harrow the Ninth, and then read this. If you don’t love it, Nona the Ninth is not for you. Also, we can’t be friends. (Actu­ally, let me dial that back – for all I know this is a valid place to start. Given Muir’s astonishing skill, I wouldn’t be a bit surprised if it turned out the books had been painstakingly constructed so you could read them in any order and be equally bewildered and delighted….)

So, the bottom-line question that confronts a reviewer of this book is, if you loved Gideon and Harrow, will you love Nona? And: obvs. You al­ready know.

Nona the Ninth is very on brand in that it com­pletely scraps the previous book. That’s right: all that painstaking lore and the complex relationships and shifting webs of allegiances you spent hundreds of pages learning? Right out the window.

And – still on brand – it works, somehow. We know who Nona is (was?) from the climax of Harrow the Ninth, but Nona doesn’t, so we’re completely disconnected from everything and everyone, living in hiding in a ramshackle refugee city, with only occasional mentions to remind us of the bigger story.

After Gideon the Ninth and Harrow the Ninth gave us almost a thousand pages of grim bone magic and bloodthirsty sword fights and the worship of the Necrolord Prime, the sunshine of Nona the Ninth is baffling – and exhilarating. Nona wears a T-shirt with a cheeseburger with legs. She loves her teacher’s (six-legged) dog. She frets about who to invite to her birthday party. She does NOT worry about the shooting in the streets or the toxic blue sphere in the sky or the imminent zombie invasion.

Plus, every time Nona takes a nap, she dream-flashbacks to tender moments with The Scourge of Death Himself, His Celestial Kindliness, the First Reborn, God – John to his friends – in which he infodumps magnificently. Another supposedly ironclad rule of writing that Tamsyn Muir carelessly, brilliantly shatters.

Compared to its predecessors, Nona the Ninth is super chill. Slow, even. At first. We’re so immersed in Nona’s POV that the larger conflict only surfaces as a concern when one of her parent-roomies (two of whom live in one body) is late picking her up from school. Overheard whispers are all we get of the Nine Houses, the planet-killer Resurrection Beasts, and the magnificent unkillable Harrowhark Nonagesimus. And glorious gay jock girl Gideon? Well, one character keeps talking about G–, so maybe that’s who that is?

But! Because of the profound trust that the previ­ous books instilled in me, I was all in. I had full confidence that it was going to pay off. I just didn’t know how. And, wow, did it. About halfway through, you notice that the plot kicked into overdrive some­where along the line and is now hurtling faster and faster toward unthinkable horror and excitement and sudden intrusions of I’m not crying, you’re crying pathos.

Pro tip: keep a browser tab open with the excellent Locked Tomb Wiki (<thelockedtomb.fandom.com/wiki/The_Locked_Tomb_Wiki>) at the ready, so that you can refresh your memory when you find out that so-and-so is actually so-and-so (gasp!) or when someone tosses off a brief mention of something super important. I read Harrow the Ninth a short six months ago, and I still needed a ton of updating (why did so-and-so flinch when someone mentioned her sister? Ooohhhhh riiiiiiiight, ugh, that happened, and it hurt my soul).

Bottom line: Tamsyn Muir can do anything. Like Gideon the Ninth and Harrow the Ninth, Nona keeps on attempting the most audacious, ridiculous, awe-inspiring feats of storytelling – and nailing it every single time. As an author I’d be nauseous with jealousy, if I wasn’t having such an ecstatic, blissful time. Nona the Ninth manages to be non-stop fun – and hilariously funny – and deeply, painfully, blister­ingly moving. Sometimes all in the same paragraph.

Sam J. Miller’s books have been called “must reads” and “bests of the year” by USA Today, Entertainment Weekly, NPR, and O: The Oprah Magazine, among others. He is the Nebula-Award-winning author of Blackfish City, which has been translated into six languages and won the hopefully-soon-to-be-renamed John W. Campbell Memorial Award. Sam’s short stories have won a Shirley Jackson Award and been nominated for the World Fantasy, Theodore Sturgeon, and Locus Awards, and have been reprinted in dozens of anthologies. He’s also the last in a long line of butchers. He lives in New York City, and at samjmiller.com 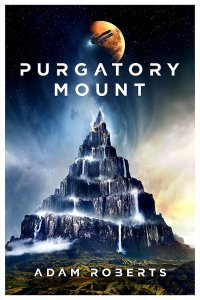