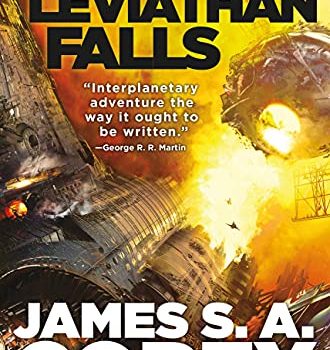 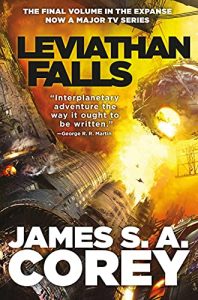 Leviathan Falls, the ninth volume of The Expanse, completes the long and com­plicated story that began with Leviathan Wakes (2011). Over its ten-year run, this series by James S.A. Corey (which is to say Daniel Abraham & Ty Franck) has mixed, matched, and stretched genres, sprung surprises, killed off im­portant cast members (and the occasional planet), and leapt over a 30-year temporal gap between volumes six and seven. Now it is time to circle around to resolve issues and solve puzzles that were generated by the earlier novels. My advance copy of the book came with a special request from the publisher that reviews be ‘‘kept as spoiler-free as possible,’’ so if I sometimes seem to be annoy­ingly vague or evasive, it’s entirely intentional. I can, however, reveal that Leviathan Falls delivers the various kinds of conclusions that the earlier entries demand: plotlines are tied up, conflicts are resolved, character arcs land appropriately, absent friends (and enemies) are recalled, metaphysical questions are addressed (‘‘answered’’ would be too strong a description), and a satisfactory finale is produced.

As the series title indicates, the overarching story is of humankind’s transition from inhabit­ing a single home system to many, thanks to the interventions of a transformative, totipotent ‘‘protomolecule,’’ the leftover technology of long-vanished interstellar precursors who (among other actions) built the mysterious Ring that leads to gateways to habitable planets. The path to inter­stellar diaspora is filled with conflict, hot and cold warfare, revolution, and eventually cosmic-level dangers. The books themselves have mashed up multiple sets of genre conventions and tropes: space opera (of course), noir crime-thriller, Big Dumb Object and ancient-alien-artifact puzzles, horror, revenge tragedy, political intrigue, global disaster, planetary exploration and pioneering, imperial rise-and-fall, resistance-against-the-oppressor, and even a science fictional version of the ghost story. (I’m probably missing a few.)

On to the current book. The Laconian Empire, which had vast ambitions (eternal rule over all humanity across the galaxy for starters) has been badly battered by insurrection, and its would-be god-emperor (faux-modestly titled ‘‘First Con­sul’’), protomolecule-altered Winston Duarte, has vanished. The pro-tem senior leader of the Empire is frantic to find his apparently superpowered boss, so he gives the relentless, remorseless, and homicidal Colonel Tanaka unlimited powers to find and return the absent Duarte. The job suits Tanaka well: she ‘‘was willing to spend a few lives if it meant catching her prey. If that made her bloodthirsty, so be it. She’d always been thirsty for something. It might as well be blood.’’ Since the closest connection to the missing First Consul is his missing daughter Teresa, finding the girl is Tanaka’s first step. Since Teresa has taken refuge with Naomi Nagata and Jim Holden and the crew of the gunship/homebase Ro­cinante, one plot thread is an extended series of chases and escapes, interrupted by explosive confrontations.

There is, of course, much more. The series has grown by constantly expanding its settings (the title warned us), as well as the scope and natures of its threats. The mysterious forces that wiped out the civilization of the protomolecule makers are now apparently trying to wipe out humankind as well. They are ‘‘extradi­mensional enemies experimenting to find ways to snuff us out wholesale’’ or ‘‘dark gods banging around in the attic,’’ and their weapons of choice include ‘‘turning the minds off in whole systems at a time’’ and even fiddling with the constants of our physical universe. Some answers might be found in a Jupiter-size crystalline object that seems to be a library left behind by the precursors. Research­ers Elvi and Fayez are running a Laconia-backed investigation of it – while also reporting out the back door to the insurrectionist underground that Naomi coordinates.

Cutting across these threads – the intrigues and space operatics, Tanaka’s pitiless pursuit, attack-by-extradimensional-enemies, and deep-galactic-history – are merely human matters: long-running romantic partnerships (Naomi and Jim, Elvi and Fayez); family connections and tensions (Rocinante pilot Alex and his son and daughter-in-law and grandson; even Teresa and Duarte), and social-professional matrices that approach the familial (the crew of Rocinante, the remnants of Belter culture that ‘‘understood what it meant to rely on the community around them’’). These are the stakes that the various actors are playing for, the personal and particular specifics that are threatened by empire or by those eldritch-seeming forces from Outside or by merely human folly and fallibility.

So the series ends as it began, with an intense mix of inventive and ingeniously mixed genre materials, dramatic shifts of scale from the cosmic to the personal, and a sharply portrayed cast of characters who are what they have been all along, but more so, no matter the gigantic transforma­tions they have lived through. A dozen viewpoints, five major plot threads, a fistful of resolutions and revelations, and the expected widescreen set-pieces that would cost Amazon a mint to get produced for video – it’s a lot to manage, and it lands with a thoroughly satisfactory mix of goshwow and adrenaline and heart. Especially heart. 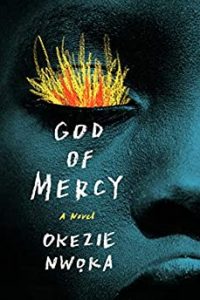