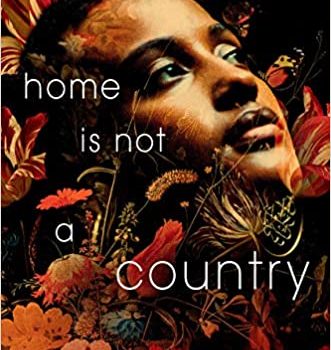 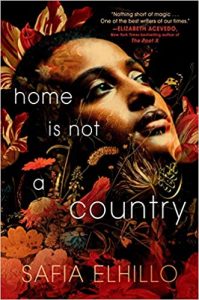 “What if?” is the question that guides Nima’s journey across time and borders. What if her mother had stayed in Sudan, rather than living in a country where their language is feared and hated? What if Nima was a graceful girl, who spoke Arabic gracefully and poured peppermint-milk tea without spilling a drop? What if Nima could shrink herself, and become a new version of her­self? One that would bring her dead father back?

In this magical realist novel written in verse, 14-year-old Nima searches for a place to belong in parallel worlds and possibilities. She feels like an outsider in the American suburbs where she lives and an outsider to a homeland she’s never seen. Even with her Arabic classes and best friend Hiatham, she still longs to be a different girl, one who is less shy and whose father is still alive. Nima wants to be Yasmeen, the name her parents intended to give her, and the girl she believes she can be, if she only makes herself smaller. What seems like typical teenage angst and identity struggles transforms into a fight against a ma­levolent, self-created monster and a chilling look into the past. Now, Nima must fight to keep the life she once hated, or risk becoming a phantom of her former self.

Nima’s shallow understanding of what it means to belong creates most of the conflict in the novel. To her, belonging means either blending in with her American classmates, or speaking perfect Arabic and becoming a master of Sudanese cul­ture. Nothing in between satisfies her, and her mind drifts to an unattainable, perfect version of herself. Elhillo weaves elegantly disruptive lyrics into the novel against the backdrop of 9/11 – when our beloved main characters’ lives are torn into by malicious, angry strangers. Elhillo’s verse slowly unravels the trauma that led Nima’s mother to the US. The damage is seemingly too great for Nima, who flickers in and out of her body as she learns more of her past. After a terrible accident harms a close friend, Nima sinks further into despair and obsession with a version of herself that does not exist. Her mother, a shell of her former self, struggles to maintain a job for them in an increas­ingly Islamaphoic country.

Elhillo does an excellent job exploring the mother’s trauma and other side characters without erasing Nima’s character arc – a difficult feat, considering Nima’s personality does not flourish until midway through the novel. Bullying and other common teenage problems are blocks in her journey to self-discovery, with the additional heartbreaking burden of hate crimes, generational grief, and the startling realization that the home she always longed for may be far more compli­cated than she expected. Her personality is more of a flickering candle, which makes her easy prey for the novel’s antagonist.

Elhillo’s story is cohesive and the narrative is easy to follow, even if some poems diverge from the main plotline. Home Is Not a Country reminds me of Hala Alyan’s Salt Houses, where nostalgia and wishful thinking make for compelling reflections on identity and character. The largest marks against this book are some of its fussy format­ting and strange stylistic choices. Even after reading the book several times, I couldn’t understand what purpose the formatting served. I eventually grew accustomed to it, but picking the book up after some time away made it difficult to immerse myself in the plot again. Fre­quent use of ampersands was distracting (even if clever) for the first few poems it was featured in, as well as the spacing of some poems. However, those small, distracting details pale in comparison to the vast swath of emotions that Elhillo man­ages to capture.

During Part Two, Home Is Not a Country takes an unexpected turn away from magical realism to time-traveling adventures, where Nima has the chance to witness firsthand the life her mother and Khaltu Hala (her mother’s best friend) seemingly deprived her of. The imagery, and subsequent poems about her and Yasmeen observing (and perhaps, interfering) with the past were provocative and eloquent in all the right ways. The second half of the novel was the strongest bunch of poems in the lot. “The Coward” and “Hala” were two of my favorites for their emotional impact and brilliant writing. Dialogue is often written in italics throughout the poems, and even the way each character speaks manages to be different in each poem. Elhillo has a strong sense of character motivations, and of the lengths they were willing to go to make their ideal lives for themselves.

Nima’s obsession with discovering who she is eventually becomes her curse, and her potential downfall. Home Is Not a Country is a beauti­fully written tale that tackles questions of home and urges caution when it comes to romanticizing lives we could have lived, and the what ifs that can haunt generations.