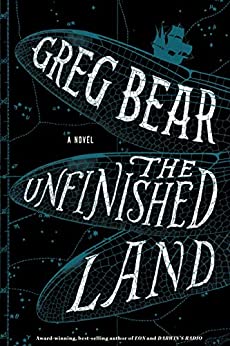 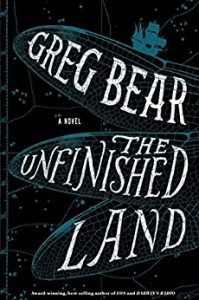 Greg Bear’s The Unfinished Land is not your standard-issue fantasy adventure, even if it does feature a young naïf who travels across a magical, quasi-living landscape, guided by and encountering a range of strangely powered beings, all on the way to a series of rev­elations about the true natures of said landscape, beings, and naïf. There are also, to be sure, swords and soldiers, mobile forests, dragon-equivalents, a wizard, and conflict among gods or godlike enti­ties for the highest of stakes. The quest-journey and the conflicts are mostly a framework to support something else, a kind of puzzle: what exactly is this land, what is its relationship to ours – the recognizably actual-historical world beyond its shores?

Following England’s great battle with the Spanish Armada, young Reynard Shotwood is rescued from a crippled and sinking ship and made prisoner on a Spanish galleon – but that vessel is itself damaged and befogged and lost in the currents that swirl around a circle of islands in the far-northern seas: the realm of Tir Na Nog. Despite the name, this is not quite the blessed land of Irish mythology, though it does seem to be a place where “mortals can live forever, and where gods, goddesses, and monsters roam according to their own laws.” When the galleon runs aground, Reynard and an old English-speaking sailor (who proves to be more than he seems at first) survive first contact with some of the island’s more dangerous inhabitants and begin a long series of meetings with beings familiar and strange.

This pattern had me thinking of other mix-and-match settings, but most strongly of David Lindsay’s odd and shaggy mystical travelogue, A Voyage to Arcturus, in which encounters with various entities and locales are fraught with mean­ings that are withheld from both protagonist and reader, though there are teasing echoes and hints. In fact, there seems to be more landscape and mys­tery than linear story to this book, as Reynard and various guides and advisors (Virgil to his Dante) make their way to an uncertain destination and Reynard’s undefined (but repeatedly referred-to) destiny. What gradually emerges is a syncretic, multicultural mythic environment, partly signaled by characters’ names. The old sailor is eventu­ally called Widsith, from the Old English for “wide-travels,” which is what he was doing on the galleon. Then there are the tattooed Pacific Islander Kaiholo (Hawaiian for “running sea”); Calybo the Afrique (echoing Caliban); Queen Hel (Norse goddess of the dead and one of the Vanir); and the hybrid giant Kern (a term for an Irish foot soldier). I confess that I don’t know what to make of “Sondheim,” though that’s a bit-part character.

Perhaps more significant are the kinds of be­ings Reynard meets, since many have roles in the metaphysical machinery that constitutes the book’s central puzzle. While Queen Hel is clearly some grade of deity, there are other great powers at large in the islands, in a hierarchy that ranges from “just below the sky” to “just above the mud.” Close to that muddy ground are fairly ordinary village folk – though some of these are high servants of Hel and others are masters of the dragon-analogue drakes. There is also the tribe of Travelers, who follow invisible, shifting roads; a magician who calls himself the King of Troy and operates mostly through his “bone-wives” (briefly animated bundles of “sticks and old bones”); and temporal-vampirish Eaters, who can take or give days or years of lifetime. Off in the distance, though felt throughout the island and beyond in the greater world, are the mysterious Crafters, whose designs seem to be fed by many of these beings.

From the time Reynard lands on the island, he is subject to dreams and visions and encounters with various disturbing or friendly-seeming entities: a man with a white shadow, the puti-like “childers” that vanish like soap bubbles, the bone-wives. Ev­erywhere we hear stories and fragments of stories: in Reynard’s memories of tales told by his father and grandmother; in the recollections of Travelers and long-lived wanderers, such as Widsith and Calybo and Kern; even in the landscapes, which are palimpsests, with erased histories beneath their surfaces. The stories (and sometimes Reynard’s memories) shift around, depending on who tells them – or as the result of other forces. Even the buildings get in on it. The village of Zodiako has a passageway whose ceiling beams are “painted on both sides with scenes from history and story. Nobody she knew had painted the beams, and nobody confessed that they knew anyone who had painted the beams, but they were painted, and the paintings were changed every few moons, while nobody was watching.”

There is a whole metaphysic here, a cosmol­ogy and cosmogony that accounts for the mobile forests, the vanishing roads, the ruins (including a castle perilous with invisible hands lighting candles), the vatic utterances, the visitations and dreams of obscure import. And the question that hovers over it all is, “Who or what is Reynard, that various powers and factions should look after him, guide him, school him?” There is eventually an answer, a reveal that fits together all of Reynard’s experiences and, on reflection, it seems to me to be kin to a particular science fictional Idea, though it would be a Spoiler to name it. But there is enough left unexplained (though hinted at) to tempt me to take another turn through this phantasmagorical, non-linear wander of a book.