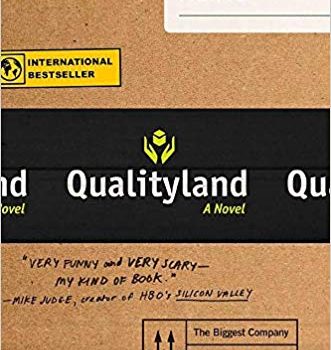 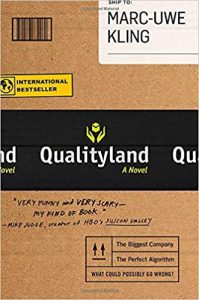 Like Joanna Kavenna’s Zed, Marc-Uwe Kling’s Qualityland (translated by Jamie Searle Ro­manelli) portrays a society, decades from now, totally in thrall to the predictive power of algo­rithms. The world of Qualityland, though, is not one that’s immediately recognisable. Aside from a handful of references to “Zuckerberg Park” and “Michael Bay Boulevard,” the titular setting and its capital, QualityCity, is so bland, so devoid of cultural signifiers, it could be anywhere on Earth. This homogeneity is deliberate. As the QualityLand travel guide informs us, following an “economic crisis of such severity that it be­came known as the crisis of the century,” it was recommended by a consultant that the country needed a new name:

The old one was worn-out and, according to surveys, only inspired die-hard nationalists with minimal buying power. Not to mention the fact that the renaming would also divest the country of a few unpleasant historical responsibilities in the process.

People’s surnames also change to be more in line with “the new progress-orientated country identity.” From birth, every boy is given his “fa­ther’s occupation as a surname and every girl the occupation of her mother.” It doesn’t end there. The citizens of QualityLand are ranked from 0 to 100, with those unfortunate enough to have a single-digit level referred to unofficially as “the Useless.”

Qualityland owes a considerable debt to Douglas Adams (something the publisher makes a point of on the back cover copy of the book). The novel features a cornucopia of faulty AI ap­pliances that might have rolled off the conveyor belt at the Sirius Cybernetics Corporation, an earworm, or “worm-like mini-robot” that “crawls down into the ear canal” and connects a person to the internet, and a hapless and awkward hero who would make a great stand-in for Arthur Dent if Dent was unavailable to travel the galaxy with Ford Prefect. While these echoes of Adams’s work are a little distracting at times, the novel isn’t a cheap Hitchiker’s Guide to the Galaxy knock-off. Kling’s dialogue is witty and sharp, the relationship between Peter and the droids is handled with a great deal of humour and warmth, and more often than not Kling lands his jokes – Qualityland is incredibly funny – a rare feat for a science fiction novel.

It’s not just about the gags though. Like Tim Maughan and Joanna Kavenna, Kling has con­cerns about Surveillance Capitalism: algorithms and machine learning that will not only keep an eye on everyone but will determine our social status while drowning us in products we don’t want. It’s a frightening picture that, for all the jokes about dolphin vibrators and combat robots suffering from post-traumatic stress disorder, is never downplayed. A second narrative strand, dealing with an election campaign where one of the candidates is an android – his name is John – recognises that these very same algorithms will be pivotal to the emergence of self-aware artificial intelligence. Kling seems agnostic as to whether this will be positive for humanity or lead to the extinction of the species. On the one hand, John is a wonderful character, his policies intended to create a more equitable society where no-one is ranked based on their profile and where compa­nies are forbidden from fueling their algorithms with harvested private information. However, a fascinating conversation between Peter and a character known as the old man – who remembers a time before QualityLand – comes to the less-than-comforting conclusion that even a benign or benevolent super AI will ultimately make us redundant. Just as with Zed and its interrogation into the problem of free-will, it’s Kling’s insight into artificial intelligence that, alongside the jokes and absurd set-pieces, makes Qualityland such a rewarding read. 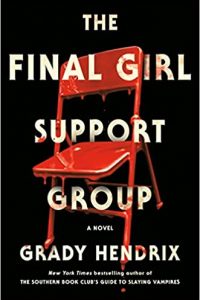