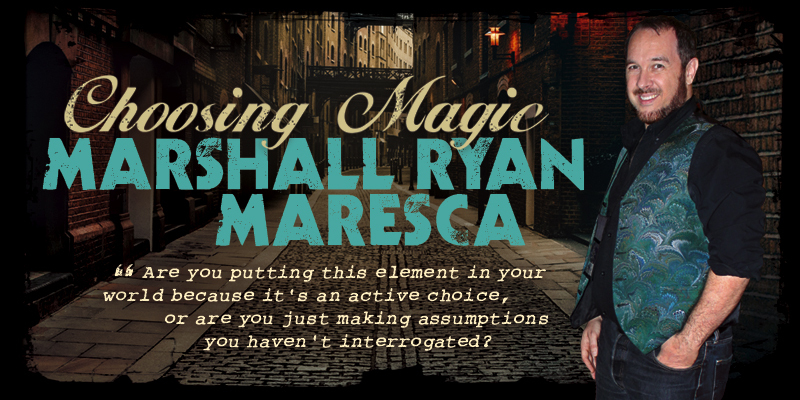 Marshall Ryan Maresca was born March 31, 1973 in Syracuse NY and grew up in upstate New York. He attended Penn State, where he got a degree in video and film production, and was active in the theater world. He settled in Austin TX, where he lives with his wife and son.

Most of Maresca‘s work is in the Maradaine world, an epic fantasy setting he has explored in four sets of braided trilogies. The first trilogy is The Thorn of Dentonhill (2015), The Alchemy of Chaos (2016), and The Imposters of Aventil (2017). The Maradaine Constabulary has A Murder of Mages (2015), An Import of Intrigue (2016), and A Parliament of Bodies (2019). The Streets of Maradaine is The Holver Alley Crew (2017), Lady Henterman‘s Wardrobe (2018), and The Fenmere Job (2020). The Maradaine Elite is The Way of the Shield (2018), Shield of the People (2019), and forthcoming People of the City (2020), which also brings together the characters from the other trilogies. Further books are forthcoming.

The Velocity of Revolution, a standalone dieselpunk novel in a new setting, will be out in 2021.

“I was definitely always a reader. My mother read to me pretty much from birth, and if memory serves, I picked up on it very quickly, and then was actively reading books to myself at an absurdly young age. I don’t specifically remember exactly how and when I fell into genre, or what book made me fall in love with genre. I loved the idea of science fiction and fantasy well before any one specific book fell into my lap – I never had that moment with, say, The Lord of the Rings or anything like that. In fact, I struggled to push through The Lord of the Rings. I had many failed attempts with that in my youth. Reading was always encouraged by my mother, and then I became a regular Dungeons and Dragons player, and that pushed me further into fantasy.

“I got my degree in film and video production, and I went to Penn State specifically for that. I was interested in studying film. The one real stricture my parents put on my college education was that I couldn’t go further away than one bordering state from New York. It had to be in New York State or a state that touches New York State. Penn State intrigued me because that was one of the few programs I could find at the time that was hands-on at the undergrad level. That sounds really weird nowadays – when my son was in high school, they were doing stuff in his film program in high school that went above and beyond anything we did in my actual college film program, because the technology is just so ubiquitous now. Back then it took a year and a half before we even got our hands on cameras. We didn’t get to do too much, but we did actual film editing, where you have the negative and you slice it and tape it back together and all that.

“I had done a lot of theater in high school, and when I didn’t do any theater stuff in my freshman or sophomore year of college, I really felt something was missing. I don’t want to say I ‘snapped,’ but I decided to do something about that, and made a random decision to direct a production of Twelfth Night. I had absolutely no idea how I was going to do that. I just put up flyers around the dorm I lived in and held audi­tions. I cast it and was holding rehearsals, but all the while, I still didn’t know where we were going to perform it. We ended up sort of bending the bureaucratic rules to use this one lecture hall, because only official student organizations were supposed to use it, and that’s where we did the show. After all that I thought, ‘Wow, that was a lot of work, that was too much, nobody would ever want to do this again.’ But literally as we were breaking down the set, people said, ‘What are we doing next?’ People were into it, and that evolved into a whole new theater group that’s still at Penn State now. As recently as January 2020, they were still doing a show every weekend there, and using that same room we did the first show in, because it went from us sneakily getting that room to it basically becoming their official room every weekend.

“After I graduated, I stuck around for an extra year in the town of State College, PA for lack of a better thing to do. Since our theater group was not an official university organization, I was still involved with them – it included my other friends who hadn’t graduated yet. I did a few more shows with them while also working in a diner, and then one of my friends got a graduate fellowship at UT. He was moving to Austin, and I was like, ‘I need to go somewhere else.’ Most of the other people who graduated from my film program went to New York or LA, but I didn’t want to do either of those towns. Austin sounded like a more interest­ing place to go. This was in the mid-’90s, with the indie film scene and Robert Rodriguez and Richard Linklater doing things in Austin. I moved down here, and ended up not getting into the film scene at all. I got into the theater scene instead. That was a lot easier just to fall into, at least in the mid-’90s. Theater here had the same sort of independent spirit that the stuff we were doing in college had.

“I am no longer a theater guy, though. I love it, but in a lot of ways that’s a young man’s game. At the time I was working a full-time job from eight to five, and then I’d just drive to where we were doing rehearsals and be there all night, sleep four hours and repeat. There was a period of time where I was rehearsing two shows at once, which were going to be going up almost at the same time, and I was rehearsing one from 5:30 to 6:30 each afternoon, right after I got out of work, and then I’d go to rehearse the other show from 7:00 to 9:30, and then go right back and rehearse the first show again at like 10:00 p.m., and sleep maybe an hour and a half. I couldn’t keep that up.

“At that time I was also writing things. I always thought, ‘Well, you know, I am interested in writing fantasy novels,’ but it was vague – ‘That’s something I’d like to do sooner or later’ – without a real plan behind it. I was writing plays and producing those, and that was around the same time I met my wife, and we got mar­ried pretty quickly. At that point, continuing to do theater was more of a challenge, because I didn’t have that same kind of time. My wife said, ‘Why are you volunteering to run the sound board for some random show, when you could be writing novels? Maybe that should really be your focus.’ She was right. I started to shift my focus and tried writing a few things that didn’t go anywhere. I was working at the University of Texas in the English department, and then I switched to a job in the chemistry department that I hated. Hating that job brought so much into focus. What was I doing? I was ‘writing a novel,’ but I wasn’t really writing anything. I wrote two trunk novels, but while they’re novel length, and novel-like, they’re just not novels. Novel-resembling objects.

“I realized I was in my mid-30s, working a job I hated, not doing the thing I said I wanted to do, so why not just blow everything up and do it? I quit that job, which made my wife very angry at first, but then we worked out a new plan. My wife’s business teaching Spanish went from being a sort of side hobby to our main source of income. She does the teaching, and I do all the other work of organization, administration, recruiting, bookkeeping, and so on. When we made that transition, I put a lot more focus into actually writing books. In a matter of months I wrote what became the first draft for The Thorn of Dentonhill. Now the twelfth book in that series, The People of the City, comes out in October.

“I’ve been really fortunate that when I started this process, there had been people who were very helpful and gave good advice and support, like Stina Leicht and Martha Wells. When I started to get serious and I went to the Armadil­loCon Writers’ Workshop, which Stina Leicht was running at the time. While I was a student there, I brought what later became the first chapter of The Holver Alley Crew to workshop. We did the thing where everyone gives critiques, and one of my teachers at for that session was an editor from Tor. After the critique, as I was walking out of the room, he said, ‘You have a lot of real talent.’ Just those seven words – that was enough to keep me going. At that point, I’d written the draft to The Thorn of Dentonhill but I wasn’t very successful with querying agents yet. Those seven words were enough to keep my head above the water line for the next couple years until I got an agent.”

Read the full review in the October 2020 issue of Locus.

Kameron Hurley: Money, Fame, Notoriety: What Are We Self-Publishing For? 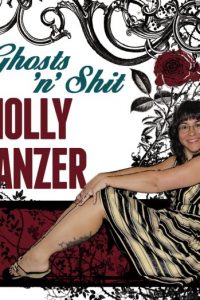