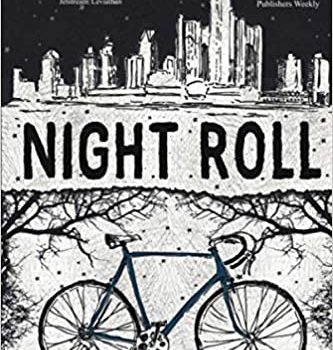 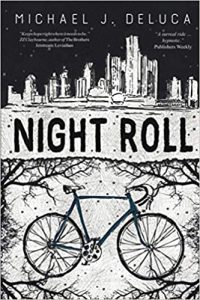 Michael J. DeLuca is known for his work with Small Beer Press and as the editor of Reckoning, an outlet for creative writing on environmental justice. He is also a consistent writer of short fiction and now has a stand-alone novella com­ing out. Night Roll is the most Detroit story I have read since Alexander Irvine’s The Nar­rows (2005), which was recommended to me by fellow Locus reviewer Gary K. Wolfe when I moved to Michigan. I’ve just recently moved away, but Night Roll brings home a lot of things that are wonderful about that city: the incredible diversity, the community-mindedness, and the quirky culture that has arisen out of the ashes of the post-industrial city. Aileen is a transplant to Detroit, but when her boyfriend deserts her as soon as her child is born, she quickly finds support from her neighbors. Virgil has been es­pecially helpful, so when he asks to borrow her bike she hesitates only briefly before agreeing. Unfortunately he then disappears, reappearing only in glimpses during the monthly “night rolls” – eccentric and eclectic parades of all manner of bicycles, from commuter bikes to Maker Faire-level creations decked out with lights and sound systems. 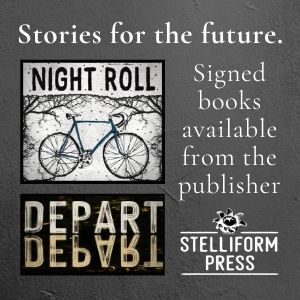 Virgil seems to be in thrall to a possibly demonic figure, which is definitely one of the iconic mythical figures of Detroit’s landscape (it also appears in Irvine’s novel). The story about trying to recover both Virgil and her bike while an aging industrialist tries to tempt her and use her for his own ends is the outer scaffolding of the narra­tive. Its softer beating heart is Aileen making her way through the first months of baby Christian’s life: relying on the kindness of others, providing kindness in return, getting a job that lets her keep her gender-neutral baby close, learning about the city’s bicycle culture, and carving out a life for her small family. It’s really about her and the people she meets along the way, reflecting the amazing diversity of the city’s populace, from the com­munity organizers to the bar tenders to the folks living in the husks of old houses. I’d recommend this book for anyone who’s ever thought “Detroit? Who would ever want to live in that wasteland?” I also very much appreciate a story that centers a mother who has to deal with all the practicalities of keeping a baby alive and thriving, no matter what circumstances she finds herself in. 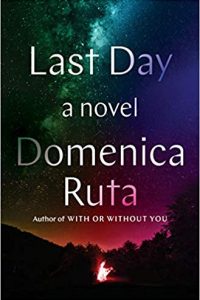 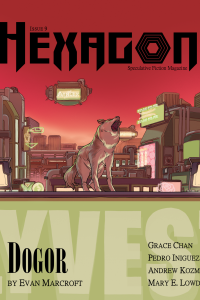