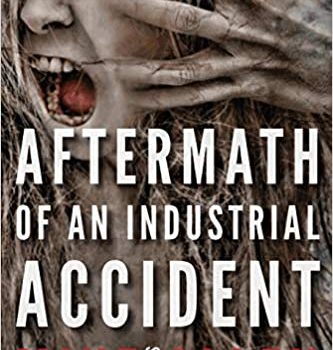 Mike Allen, Aftermath of an Industrial Ac­cident (Mythic Delirium 7/20) Small-press publisher and editor Allen demonstrates his own wide-ranging writing talents in this collection of 16 stories and seven poems, three brand new, most horror, but in a variety of styles, including from psychological and body horror to ghosts and nightmares.

Marie Brennan, Driftwood (Tachyon 8/20) Bren­nan’s powerful new fantasy novel, the first in a series, introduces the world of Driftwood, a place where slow apocalypses pull fragments of worlds together, mixing them into myths that eventually fade away and disappear – and desperate inhabit­ants of these vividly portrayed worlds seek out the legendary Last, who is rumored to know the secrets of survival.

Gardner Dozois & Michael Swanwick, City Under the Stars (Tor.com Publishing 8/20) This short SF novel about a man surviving in an almost feudal society in a world full of high-tech remnants of a Utopian society was expanded by both authors from their 1995 novella “The City of God” and completed by Swanwick after Dozois’s death. Swanwick discusses his friendship and collaboration with Dozois in his fascinating afterword. “Swanwick has already honored his friend’s legacy by echoing without aping his style…and the final honor is giving us a smart and hopeful tale that’s a corker, even if you’ve never read a word of Dozois’s fiction.”

Jonathan R. Eller, Bradbury Beyond Apollo (University of Illinois 8/20) This third and final volume in Eller’s acclaimed critical biography series covers the second half of Bradbury’s life, as fame largely pulled him away from writing fiction. Extensive interviews with Bradbury offer insights into his life and last works.

Jordan Ifueko, Raybearer (Amulet 8/20) A young woman tries to create her own destiny in this young-adult fantasy inspired by West Africa, a first novel getting critical acclaim. Tarisai, raised unaware of her supernatural origins and her mother’s plans to use her to kill a prince, is determined to win a place on that prince’s Council – and save his life.

Kathleen Jennings, Flyaway (Tor.com Publish­ing 8/20) This gothic horror novella, strikingly illustrated by the author, follows a young woman in an Australian outback town who finds a note from one of her brothers who disappeared along with her father. Her search for the truth about that disappearance takes her to truly weird places. “A striking and almost unexpectedly dark story…. Another excellent outing from Kathleen Jen­nings.” [Rich Horton].

Micaiah Johnson, The Space Between Worlds (Del Rey 8/20) Action, intrigue, jobs, and rela­tionships of many sorts mingle in this SF novel about travel to parallel Earths – as long as the traveler isn’t alive on the world they’re visiting. “This is a jewel of a novel, all the more impressive for being Johnson’s debut.” [Liz Bourke]

John Langan, Children of the Fang and Other Genealogies (Word Horde 8/20) Horror master Langan explores his literary roots in this collec­tion of 21 varied stories, one new, with detailed notes on the inspirations for each of the tales to help fill out this fascinating family tree of dark fiction.

Linden A. Lewis, The First Sister (Gallery/Skybound 8/20) A sex worker with the military forces of Earth and Mars who hopes for freedom gets involved in conflict over the control of Ceres. This sweeping first novel, the first in a series, has been getting plenty of critical attention for its mix of thrills and explorations of power, race, gender, colonization, and technology.

Lavie Tidhar, By Force Alone (Tor 8/20; in the UK from Head of Zeus 3/20) Tidhar turns his considerable talent for reimagining history and literature to Arthurian fantasy in his latest novel, adding a strong edge of political satire to a tale in which Arthur starts as a power-hungry young gangster in fifth-century London. As the story progresses Tidhar explores the development of Arthurian legend and questions of nationalism, but at the same time “By Force Alone is a jolt of pure entertainment, a brilliant, revisionist blend of magic, crime syndicates, and Kung-fu knights.” [Ian Mond]

From the October 2020 issue of Locus.

From the April 2015 issue of Locus Magazine I’m asked, often, what I feel about ‘‘the haters’’ or ‘‘the detractors’’ who don’t like me or my work, and I think it’s an odd question, because, to be blunt – I don’t care what those people think. Spewing unrestrained and unabashed vitriol across a page or in a public forum has always been a great way to call attention to oneself,