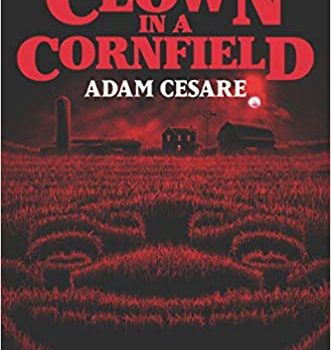 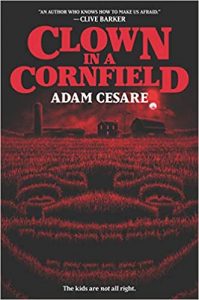 I’ve not previously read the work of Adam Cesare, but I was drawn to his new teen horror novel, Clown in a Cornfield, because of its strik­ing red and black cover, of a cornfield fashioned in the image (you guessed it) of a grinning clown. It’s a cover that gave me pleasing flashbacks to the schlocky horror fiction (recently immor­talised by Grady Hendrix in Paperbacks from Hell) of Shaun Huston, Guy N. Smith, Richard Laymon, and Bentley Little that I binged back in the late ’80s and early ’90s. Adam Cesare is a far better writer than those authors (his fiction is certainly less sleazy and rapey). Still, that same DNA, the over-the-top violence and the insane motivations of the villains are evident in Clown in a Cornfield.

The story is told mostly from the perspective of teenager Quinn Maybrook. She, and her father, have moved from Philadelphia to the small town of Kettle Springs in Missouri in the hope of start­ing afresh following the death of Quinn’s mother. (Yes, this is a “Dead Mom” narrative, not one of my favourite tropes). On her first day at Kettle Springs High, Quinn – usually a conscientious student – is ejected from class for giggling (more out of surprise, then malice) at the unhinged rantings of her science teacher. She is lumped together with the “bad kids,” also ejected from the same class, including the handsome rebel Cole Hill. His family were the towns major em­ployer until Cole’s father shut down the Baypen Corn Syrup Factory following the sudden death of his daughter. With the town in economic strife, a rift has grown between the younger and older generations. This comes to a head when Cole and his gang, now including a reluctant Quinn, ruin the town’s yearly Founder’s Day parade, an awkward, cheap affair that focuses on Kettle Hill’s mascot Frendo – “an old-timey clown with a porkpie hat and red, bulbous nose.” With the adults enraged, Cole organises a party out in the cornfields of Kettle Hill. There’s music and booze, and hidden amongst the cornstalks there’s a homicidal clown out for blood.

Without traipsing too far into spoiler terri­tory, the motivations revealed in the last third of Clown in a Cornfield hinge on the genera­tional divide in America; a rift that has grown even wider with the election of Trump. In terms of imagery, Cesare does do an excellent job in juxtaposing the YouTube obsessed youth with the town’s 1950s aesthetic.

On one side there were yellowed newspaper clippings about giant pumpkin pies made from giant blue-ribbon-winning pumpkins, little old ladies wearing kitty sweaters they’d knit themselves, and over that delicate small town, the huge, aged sheriff protecting law and order. On the other side – in what seemed like a different dimension – there were the kids with their iPhones, taking in the world through electric eyes a gigabyte at a time.

But Cesare makes no real effort to develop this idea. As a consequence, when those ordering the clowns reveal their reasons for murdering a good chunk of the teenage population, it’s a little hard to swallow. Even so, the ludicrous plotting is part of the novel’s charm. When a younger me read Richard Laymon, Shaun Huston, or Guy N. Smith, it wasn’t for their astute, profound take on the state of the world. I was there for the exaggerated set-pieces, the buckets of gore and, yes, the smut (I was, after all, a hormonal teenager). In terms of the sex, Cesare is a lot tamer than those authors, but when it comes to wanton violence, he’s not afraid to splash gal­lons of blood around. And while the novel is not as inventive or playful as it might have been, Cesare’s cinematic eye means the set-pieces are loud, brash, and dramatic (it’s no surprise that there’s a film adaptation in the works). Given what we are all experiencing now, there’s some­thing wonderfully pleasing, nostalgic, and even therapeutic spending several hours cheering on Quinn – smart and brave – as she takes on a marauding group of killer clowns. 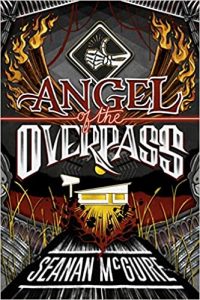 Carolyn Cushman Reviews Angel of the Overpass and Calculated Risks by Seanan McGuire, and Trouble in the Stars by Sarah Prineas 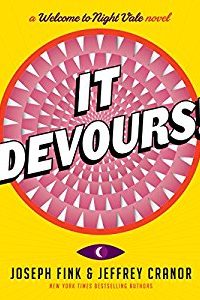