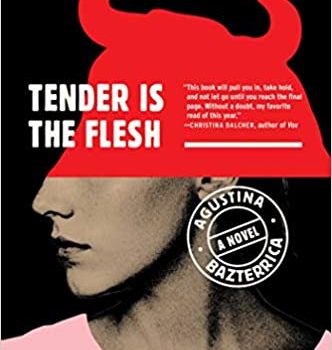 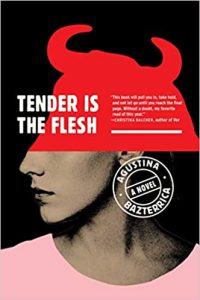 Tender Is the Flesh, by Argentinian author Agustina Bazterrica (and wonderfully translated from the Spanish by Sarah Moses), is not for the faint of heart. The novel is set sometime in the future, when animals across the world have been infected by a virus that’s made them poisonous to eat. In response, governments cull their livestock, empty their zoos, and mandate the use of umbrel­las to prevent diseased birds from passing on the infection. A rise in cannibalism – with immigrants and the indigent disappearing in large numbers – forces world leaders to act; but rather than ban the consumption of human flesh, they lean into the practice, gradually transitioning society to a legalised form of cannibalism. “They adapted the processing plants and regulations. Not long after, they began to breed people as animals to supply the massive demand for meat.” We’re told all this by Marcos. Before the “transition” he worked at his father’s processing plant slaughtering sheep and cows. When his father – now suffering de­mentia – sold the tannery to pay off loans, Marcos became the right-hand man to the new owner, Señor Urami. He has come, though, to despise the work – “the blood, the dense smell, the auto­mation, the absence of thought” – his feelings of guilt and self-hate only compounded by his wife leaving him, following the tragic death of their infant son. Then one day, a supplier sends Marcos a female as a gift; a genetically pure and fertile one, bred in captivity. Marcos knows he should imme­diately sell the beast. Instead, he commits the most abominable of sins; he starts treating the female as a human being.

There’s something decidedly cynical in the as­sumption that if animals weren’t available most of us would choose to eat human flesh over a vegetarian or vegan lifestyle. Then again, based on the incredible amount of stupidity I’ve witnessed this year, it’s not an assumption that’s difficult to swallow. Bazterrica, though, doesn’t rely on the reader’s pessimism; she delivers a world – sterile and cold – that works through the logic of government-legalised canni­balism. A harrowing tour of Señor Urami’s facility early in the novel meticulously details the rules and regulations surrounding the rearing and slaughter of livestock, while a bureaucracy of inspectors – Marcos began his career in their service – routinely check that people aren’t using the meat as cheap labour or as sex-slaves. In addition, certain words and phrases, like “human livestock” and “cannibalism” are censored, the utterance of which can see a person sent to the Municipal Slaughterhouse (yes, that’s right; commit a crime, any crime, and you become food). At the same time, and without undercutting her worldbuilding, Bazterrica acknowledges the inherent absurdity of her society. As noted, people are expected to carry umbrellas to protect either against infected bird shit or a Hitchcockian wave of feathered missiles. But we also have legalised hu­man hunting, consisting mostly of celebrities whose crushing debts are forgiven if they can survive the chase, and a religious order who sacrifice themselves so they can be used for food, ultimately ending up as chow for scavengers because no-one, in their right mind, would pay market value for willing meat. There’s even a call-out to Soylent Green, which has been banned but can be viewed on the Dark Web.

In Marcos, Bazterrica presents a moving portrait of a man who continues to grieve over the death of his son; who cares deeply for his dying father; and who loathes his snobbish sister, her rich husband and their creepy, sociopathic kids. Throughout, there are some gut-wrenching scenes, particularly the challenges Marcos and his wife go through to have children (which we know ends in tragedy) and his childhood memories of visiting the zoo with his father, a zoo now abandoned and decayed. Where that portrait starts to fray is regarding Marcos’s relationship with his “gift.” Yes, he treats her more like a human – she is given a name (Jasmine), she wears clothes, and she learns how to help around the house – but importantly, this shift only happens after they have sex. Bazterrica frames the sequence (or more precisely the lead-up; she cuts away before they have sex) as an intimate experience. There’s no getting around the fact that it’s also a rape scene: Marcos has all the power and Jasmine has no means, physically, emotionally, or mentally, to provide con­sent. Initially, I was bothered that Bazterrica didn’t interrogate this further, that Marcos never feels any remorse over what he’s done, and then I realised that this is precisely the point of Tender Is the Flesh. More than just a critique on how capitalism and greed dehumanises a society, Bazterrica digs a little deeper and shows how our unlimited capacity to adapt allows even those with a conscience to normalise the most horrible, outrageous, and awful of deeds. 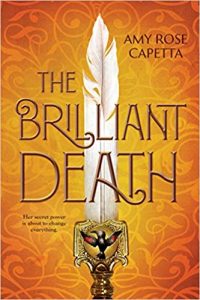