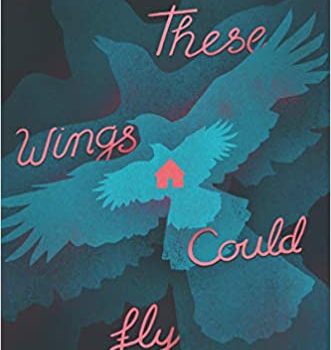 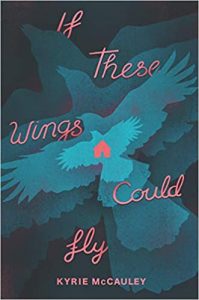 Kyrie McCauley’s intense, realistic, and some­times shocking If These Wings Could Fly has only the most subtle of paranormal touches. It is a haunted house story where the haunting is designed to keep secrets and foster lies rather strike terror through overt acts. But this story of one family’s unraveling in the face of domestic violence doesn’t need monsters to come out of the walls – the beast they have to deal with is terrifying enough in the kitchen, eating break­fast, getting ready for his next explosion.

High school senior Leighton is planning to graduate and get out of the house, but first she has to figure out how to get her little sisters and her mother away from her increasingly violent father. Her mother, who has loved her father since they were teenagers, is incapable of breaking away from him. She forgives every act while expending enormous energy trying to stave off the next explosion. Leighton has had it – all three of the siblings have had it – but she can’t save everyone on her own and trying to do that is tearing her apart.

On top of keeping the family situation a secret, Leighton finds herself increasingly transfixed by the flocks of crows that are set­tling around her small Pennsylvania town. The crows, including one that appears to have befriended her and her sisters, soon dominate town conversation as more and more of them fill the trees, rooftops, and every other conceivable structure. A hunt is scheduled, which barely puts a dent into the assembly. Then Leighton begins to suspect that her “pet” crow might actually be someone who once knew and loved her family very much.

The family tension coupled with the myste­rious crow appearances would be plenty for a novel, but McCauley also layers on the strange conditions in the house, where damaged walls and broken picture frames quickly repair them­selves, protecting her father from garnering too much notice. There is never any evidence of the chaos he brings down on his family and, when faced with considering the worst about a town’s favorite son and former football hero, everyone finds it so much easier to just look the other way. Leighton slowly comes to suspect that the house is part of a legacy of family violence, a critical partner in what drives her father to anger just as it drove his own father years before.

McCauley succeeds on so many levels with If These Wings Could Fly but most especially on her gorgeous use of language. Consider this slight excerpt, which conveys menace in only a few words:

I’m not scared of the dark. I’m scared I won’t make it to morning. So I lie awake at night and I think about that crawlspace. I think about how it might be where he hides our bodies one day.

The author sneaks up on you with this novel; even though you know it’s about a family com­ing apart, McCauley still manages to take the reader to unexpected places on the journey and packs a lot of surprise into the smallest of statements. Leighton finds her courage, as do her sisters and her mother, and the crows, the crows, are SPECTACULAR. Finally, while If These Wings Could Fly is a searing look at what goes on behind the closed doors of an average family, it also burns on many levels and brands the reader with the kind of literary imprint they will likely not want to forget.