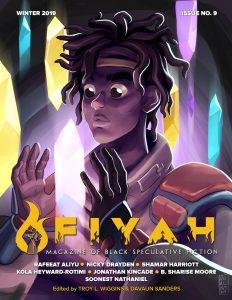 Fiyah has its first unthemed issue with #9, which also marks a transition as founding editor Justina Ireland moves on and DaVaun Sanders joins Troy L. Wiggins on the editorial team. The stories here are all over the genre landscape, from fantasy to SF with more than a little surrealism thrown in. My favorites lean towards the science fictional end of the spectrum, such as “Gloss” by newcomer Kola Heyward-Rotimi. The narrator is one of the founders of The Clipper, an awesome club built in a nook of an MMORPG video game; a place for people who care less about the game than about ex­pressing themselves and having fun. Unfortunately the place goes dead when the game developers put out a patch that, unintentionally, boots them out and ruins their cyber niche. Ace and his partner Zeal have to figure out what to do with themselves without the place, how to say goodbye, and what their relationship means. The sense of style that pervades the whole piece, both in the flamboyant gestures and the quiet moments, really shines. Bringing in the weird, Nicky Drayden gives us “The Rat King of Spanish Harlem“. Alicia is barely getting by, working at a collection agency and renting a place with her loser husband, Javier. There’s a parasitic “disease” starting to spread that makes people more likely to be happy and communal. Her husband buys back a necklace that she had to pawn; her boss at the agency starts accepting barter for payments. That’s all well and good, until those infected start growing tails and merging into communal relationships with each other – and Alicia continues to be uninfected. Her perspective on the good and the bad that she sees as more and more people join the groups is an interesting take, keeping the story from devolving into an uncritical utopia or dystopia.

Carolyn Ives Gilman brings us a typically thoughtful hard SF story in March’s Lightspeed, “On the Shores of Ligeia“. Told through the eyes of a postdoc called upon at the last minute to debut a telerobotic explorer on Saturn’s moon Titan, the story contrasts three different models of near-future solar system exploration: a European robot, with an algorithm that drives it to explore and a VR suite so researchers can come along for the ride; an American boots-and-flags mission to Mars; and hints of something different, possibly more democratic, than either. I feel like the poor post-doc’s media performance will be adorable or infuriating, depending on your temper, but this is a very thoughtful story about how we might con­tinue to push out towards other planets. Turning, as we often do, from outer space to inner space, “Self-Storage Starts with the Heart” by Maria Romasco Moore brings us James, a very, very lonely man. His sole friend, Christopher, can’t war-game with him anymore since the baby came, and James is desperately trying to stop leaving him voicemail messages every hour. Thanks to recent breakthroughs, people have learned how to store their unwanted emotions, and while James can’t afford a licensed facility he does enough research to jury rig a storage bin for his loneliness. And it works: he really feels better. He starts helping his neighbors as well and soon has a decent busi­ness for himself. When Christopher swings by for a visit he’s shocked, and of course there’s a crisis. I loved the idea of the story and how well it’s thought out, and James’ character progression worked very well.

Future Tense (from Slate) continues its series of monthly thought-provoking short pieces; in Janu­ary Ken Liu gives us “Thoughts and Prayers“. Those following US politics will be unsurprised to find a story about a mass shooting and gun control, but even more than that, this is a story about on­line interactions and trolling. Hayley is a college girl killed in a mass shooting. The story unfolds through interviews with her younger sister, father, mother, aunt, and eventually one of the trolls who attacks the family with grotesque images of their loved one. All the family members have their own perspectives on the media, including the mother who agrees to allow Hayley’s images and family photos/video/experiences to be used in a political action campaign. After that draws the attention of trolls who manipulate Hayley’s images in a number of horrible ways, the aunt steps in to offer social media “armor” to protect them. The story highlights the constantly evolving tug-of-war be­tween trolls and anyone trying to engage in serious discourse in public, and the software arms race that ensues. This is one of those “three minutes into the future” stories that gut-wrenchingly il­luminates our present.

Abyss & Apex is a quarterly that’s always worth taking a look at, and this winter a few stories stood out to me. “Exactly What You Need” by Brandon Crilly starts out as a typical magic bookstore story, with Constance running the shop after her partner passed away. People magically always manage to find exactly the volume they need, but that takes a darker turn when a magic user who had to flee Syria comes in looking for something very specific and very powerful. This story takes a cozy trope and delves deep into grief and sorrow. Very well done. “Adrift” by newcomer Wayne Martin has a nicely executed SFnal idea with sapient creatures living in a gas giant environment. We follow the journey of a male as he comes out of hibernation and goes searching for his partner, trying to find her and see if their offspring made it through the season. There’s a nice stomach-drop to the plot before it resolves, and I thought the creature’s perspective was very well done. There’s also a somewhat paint-by-numbers human plot interspersed throughout, featuring a slightly mercenary researcher studying the crea­tures from orbit. Finally “Cold Currents” is an intense piece of flash fiction by M.E. Garber. Otto is a firefighter who dives into a river to rescue a woman who jumps; the river has claimed many of his relatives and he feels its siren call himself. The rapidly evolving sensations from his POV make good use of the short format.

January’s story in Cosmic Roots and Eldritch Shores is “The Ice Angel of Leningrad” by Eugene Morgulis. The story starts in horror as young Sveta avoids the fate of so many around her, either starving or freezing to death, only by ignor­ing Death when he comes for her. Her mother gets her on a train out of the city after her brother dies of starvation, scraping together bribe after bribe. Sveta finds herself at something of a crossroads with no family and almost no will to live when the story takes a turn towards the surreal. The tone, which manages to be both matter of fact and allu­sive all at once, serves us well as things get weird, and Sveta gets a chance, denied to many others, to make a choice. I’m not always a fan of stories that use historical tragedies, especially the mass atrocities of WWII, as a backdrop – I often worry that they unfairly privilege the survivors – but I felt this one played it well, with a somewhat European surreality overlaid on an undeniably surreal reality.