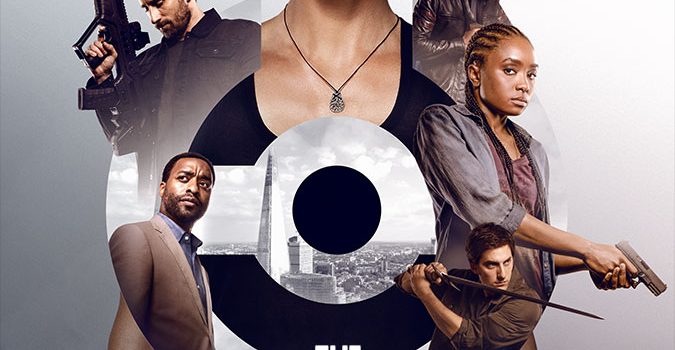 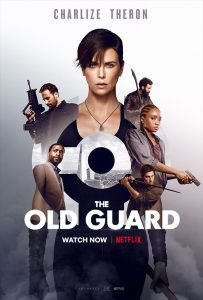 Charlize Theron, as Andy, anchors a squad of immortal mercenaries in The Old Guard, a movie based on Greg Rucka’s graphic novels of the same name. Joining her are Booker (Matthias Schoenaerts), Joe (Marwan Kenzari), and Nicky (Luca Marinelli) as fellow immortals who have fought by Andy’s side for hundreds of years. Also sharing these powers are Nile Freeman (KiKi Layne) — a Marine who is quite surprised to discover her regenerative abilities during a tour of duty — and Andy’s fridged comrade Quynh (Van Veronica Ngo).

Insert Chiwetel Ejiofor as a gray hat CIA agent, and Harry Melling (of Harry Potter‘s Cousin Dudley infamy) as a pharmaceutical CEO with Martin Shkreli-level business ethics, and you’ve got pretty much everything needed for a pleasantly diverting superhero thriller.

Arley: It was a cool action movie. An easy, fun watch.

Josh: I thought the fight scenes were great! Not quite as intense as John Wick, but they were all well choreographed and pretty impressive.

Arley: My favorite parts were the effects of the immortals regenerating — it looked really good when they healed. Someone called this Highlander, which it is not, so it’s important to note that that’s wrong. I was tempted to compare it to X-Men, but it’s not that either. The exploitation of the immortals angle is like Bloodshot, which is also similar to a lot of X-Men storylines. That said I’d say the storyline of, “Oh, these people have superpowers, we should exploit them,” is, to me, clichéd.

Josh: I saw every betrayal coming from a mile away. (And there are quite a few betrayals.)

Arley: It’s very by-the-book, but somehow that doesn’t really detract from the enjoyment.

Josh: It reminded me of Wanted, another comic-book adaptation, because of the violent secret society aspect of it.

One of the things that differentiates The Old Guard from these comparisons is that its scope is much tighter, limited to a handful of people. In Highlander there’s an unknown number of immortals, but in this film there are only a few, and they immediately know each other, which keeps the story more focused. There is a big scope to it in terms of time, because Andy has been around for something like 2,000 years. It’s not touched on very much in this story (though there is sequel bait), but it’s a great backdrop to set the modern plot against — this idea that these people have always been around, shaping history.

Josh: It also gave me kind of an Assassin’s Creed vibe.

Arley: I had mixed feelings about Andy’s ultimate character reveal. On one hand, it’s a touching resolve, but it’s also hokey, if you think about it. The writers want it to be that all her actions result in positive change, and that this positive change continues through generations of people directly impacted — someone she saves has kids who make big, wonderful changes in the world, for example. But there’s no way she can control what people do after she saves them. Not even that initial person she saved. It’s all chaos theory. And tracking it even to the second generation (let alone more) breaks my suspension of disbelief.

Josh: Sure, they kind of ruin it there by over-explaining things. It would have been a stronger moment if they’d left it vague.

Like we’ve asked before with Deadpool: Is an immortal character worth watching? Normally, a story without any danger is boring, but The Old Guard sets up stakes even for its immortals. There are some things worse than death and, as we (and the characters) slowly come to realize, even their regenerative abilities eventually run out. Finding out what happened to Quynh was an “Oh shit” moment, demonstrating just how much being immortal can suck.

Andy’s character, like many self-healing superheroes, follows the Wolverine model, gruff and tired of being immortal. Why can’t they ever not be tired of living forever? Perhaps it speaks to humanity’s subconscious fears of something living on a grander scale than us (in terms of time, wealth, strength, etc.) that longevity is often portrayed as a curse. (See, for example, Interview with the Vampire, The Picture of Dorian Gray, The Pirates of the Caribbean, or Watchmen‘s Dr. Manhattan.)

At the very least, the miracle of compound interest would make Andy and her squad fantastically rich with minimal effort, and would presumably allow them to influence global events much more effectively than whatever impact they can manage with small-arms fire. The script has run into the Batman problem: instead of leveraging their actual advantages, they prefer to confront all problems with direct violence.

Josh: Charlize Theron is good in pretty much everything. I think she really punched up the material they had to work with here.

Arley: If I ever had any problem with any of the acting, I feel like it was probably a problem with the directing and writing, not the actors. There were moments where things just seemed over the top or hammy compared to the rest of the movie. The flashback to the scene of the first death, something felt overplayed and I don’t think it was Charlize Theron, I think it was the directing. There was a moment in the lab during their battle. Even the opening, the oh-so-gritty monologue, had me eye-rolling a bit.

Josh: I liked the delay in introducing Nile Freeman.

Josh: It’s maybe a quarter of the way into the film before we even see her, and by then the world has been pretty well established for us. That cuts out the need for extraneous fish-out-of-water moments and lets them get on with the action.

Arley: The use of that character is one of the more interesting writing/plot elements. You start with one protagonist, and then you end with another one by the time it’s all over. But I really didn’t feel comfortable with the scene where Andy and Freeman fight on the plane. Experienced immortal white woman beats the shit out of the young Black woman. It was unnecessary and, seriously, we don’t need to see a white person beating the shit out of a Black person in this (or almost any) context, especially right now. There are so many other ways that scene could have played out. Besides, any level of real combat mastery would require less force to end the fight.

Josh: I guess the filmmakers just wanted to have a fight on an airplane.

Arley: Sure. I’m down for fight on a plane, just not white person beat the shit out of Black person needlessly.

Josh: It did set up the Russian bit that comes into play later, so at least the scene had some purpose.

Arley: I’m glad that they at least tried — young Black female protagonist, and gay couple, one of whom is Muslim — but they didn’t quite succeed. More than a lot of movies bother doing. I’m looking at YOU, almost every other action movie. Social progress is still a work in progress.

Josh: Noteworthy that Freeman was part of an all-female fireteam in a Muslim country. Is that a real thing these days? If not, seems like it should be, because the local women aren’t going to talk to men (you see the same thing in Whiskey Tango Foxtrot, that Tina Fey movie). Either way, it was an interesting detail.

The character of Quynh was set up in such a way that you’d expect her to play a more central, or driving, element to the plot, but her actual payoff is lacking. We could have used even more bonding between her and Andy, to really solidify the emotional toll that this immortal life exacts. She was one of the most interesting aspects of the story, and severely underutilized.

The corporate asshole villain is, on the other hand, overdone. We can 100% believe that that person exists, just from looking at current headlines, but it’s a tired storyline. A different, less stereotypical, villain would have gone far in elevating The Old Guard above previous supersoldier movies. Bloodshot managed to take a similarly standard comic book story and completely shake things up. Quynh is a sub-sub-subplot, and yet even the brief amount of time devoted to her is more imaginative than the actual storyline.

Josh: Well, one last thing: I do have to say that I really did not like the music. Every time a fight scene started, the music kicked in with some club song that didn’t match the tone of the action. After the second or third time that happened, it got to be very distracting. But that’s pretty much the only completely negative thing I’d say about this movie. Everything else was fine.

Arley: Again one of those “the more you examine it, a couple of things will fall apart.” Best enjoyed not overthinking it. It’s a mediocre plot held together with some really good fight scenes and solid acting.

Josh: It definitely benefits from a lack of competition. If you haven’t seen Bloodshot yet, go watch that first. If you have, then go ahead and watch The Old Guard for some fun, if mostly standard, action. 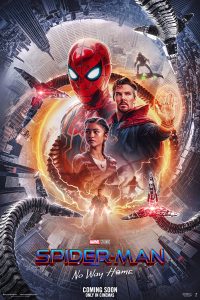 Into the Metaverse: Josh Pearce and Arley Sorg Discuss Spider-Man: No Way Home 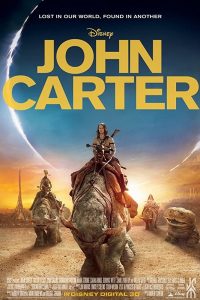 Barsoom Revisited, or Forewarned, Four-Armed: A Review of John Carter 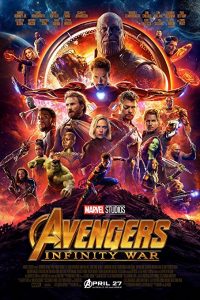