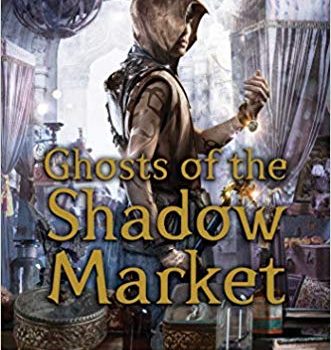 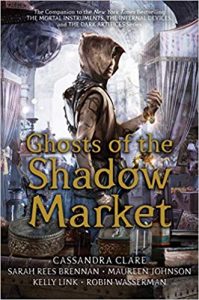 Ghosts of the Shadow Market is a mammoth anthology of stories written to accompany Cassandra Clare’s immersive Shadow Market world. Clare has brought an impressive group of co-writers along with her – Sarah Rees Brennan, Maureen Johnson, Kelly Link, and Robin Wasser­man – and indulges all manner of fan obsessions and questions in the ten included stories, eight of which were previously published as ebooks. Although all were solid entries (especially Anna Lightwood’s adventures in “Every Exquisite Thing”), I’m going to focus on the two new stories in this review.

“The Lost World” by Clare & Kelly Link focuses on Livvy Blackthorn, who has been brought back from the dead via dark magic utilized by her grief-stricken twin, Ty. The siblings are adjusting to their new relationship, with Livvy’s “return” still unknown, with a few significant exceptions, to their family and friends. Ty is attending the Scholomance and Livvy, who remains tethered to him via magical connection, is right there beside him. They studiously take notes on what she is able to do in her new ghostly form, strug­gling to maintain a scholarly approach to their “experiment.” While all of this is important, it does get dull, so they plan a trip for Livvy to spy on Idris, which means the two of them will suffer a significant physical separation. While Livvy learns a little, it is the impact of the journey that is far more significant. Then she decides to travel again, and the relatively benign experiment takes a potentially devastating turn.

What is nice is that “The Lost World” is fairly contained. While Livvy learns a bit about the larger war the series is embroiled in, Clare & Link mostly concern themselves with how the twins are coping with Livvy’s resurrection. This makes the story mostly a classic coming-of-age tale as Livvy learns what death means to her and Ty struggles with the physical ramifications of his actions. Most of the narrative is on Livvy, who has the most to deal with and “The Lost World” allows readers to see just how she is coping and how tough this new “life” is going to be.

There is more at stake in “Forever Fallen” which teams Clare up with Sarah Rees Brennan. Set in 2013, the story initially offers a sweet look at Jem and Tessa’s new lives as parents, both to their baby Mina and teen Kit Herondale, who now lives with them. There is also the malevolent watchful presence of the false Jace, who goes by the name “Janus,” and is determined to infiltrate and take over the life of the true Jace Herondale. Janus suffered mightily in his life in Thule, and escaped with one singular goal: to get back as much of that life as he could by stealing it from others. This is classic “parallel worlds” drama, although Clare & Brennan dole it out with a seri­ous helping of bloody death as Janus homes in on his prey. Nothing is settled in “Forever Fallen” other than a major ratcheting in the tension (Alec and Magnus!! Clary!!!) and a lot of impending doom. I don’t see Janus as a redeemable character, but who knows? Clare is a wizard when it comes to this sort of thing and she could likely generate sympathy for the devil. In the story’s final pages he is clearly set on a path of destruction and it is doubtful anyone will get out of his way unscathed.

Ghosts of the Shadow Market is not for those new to the Shadow Market world but is a true boon to longtime readers. It’s nice to see all these stories in one package and fans should especially relish the wealth of authorial talent that has gone into their creation.