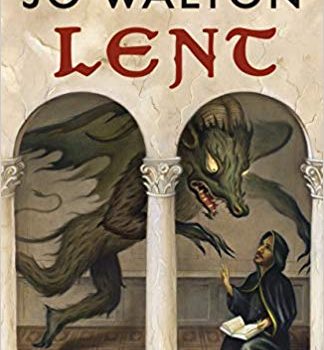 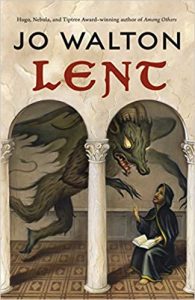 Jo Walton goes full multiverse in Lent, her fascinating examination of the life, or possible lives, of the Florentine cleric and prophet Girolamo Savonarola. Except for serious history buffs, Savonarola is mostly remembered for his famous Bonfire of the Vanities – which Walton, in an afterword, insists was “more like Burning Man” than a traditional repressive book burning – and for a later bonfire unfortunately involving himself. But he was a key figure in the early Renaissance, paradoxically both a good friend of the humanist Pico della Mirandola and a fire-and-brimstone crusader determined to remold Florence into an idealized City of God. The action of Lent takes place almost entirely between the death of Lorenzo de’ Medici in 1492 and Savonarola’s own execution in 1498, a period during which he virtually ran the city for a time, when it was under threat from the French, but increasingly defied the Pope and was eventually excommunicated. For most of its first half, the narrative, skipping forward from one present-tense scene to the next one a few days or months later, reads like an episodic, straight historical account of these years.

Except for a couple of things. Demons are real in this world, and Savonarola alone can see them (although a few other sensitives can perceive shadows or presences). He can also summarily banish them, using a neat trick with his fingers, and can, in a somewhat limited way, foretell the future. (Later on, he’s even able to see events all the way into the 20th century, and he doesn’t find them promising.) He also comes across, in a hol­lowed-out book, a strange green stone which he thinks may be the “Stone of Titurel,” and which will become as close to a magical amulet as the novel is going to offer us. These opening chapters establish important baselines for Savonarola’s deeply conflicted character – no amount of self-mortification seems to be able to rid him of the sin of pride – as well as the characters of Pico della Mirandolo, Marcilio Ficino – another prominent humanist and translator of Plato (and another figure who showed up in Walton’s Thessaly trilogy) – and an impressive cast of secondary characters. But then, just when Savonarola’s tale seems to be approaching its tragic end, he learns a shattering revelation about himself, which also has the effect of shattering the narrative into fragments in which he experiences different “iterations” of his life, sometimes with the same scenes recreated in these variant timelines as Savonarola repeatedly strives to “fix” history and his own hopes for redemption.

Walton makes it clear that the second half of the novel isn’t a simple Groundhog Day scenario in which the events of the same day in the same world are played out for the purposes of moral education, but rather a series of alternate universes drawn from Renaissance cosmologies. Hell is a real place, and demons, when embodied, are capable of altering history. By the time we’ve played through several of these accelerating variations on a theme – some only a few pages long, and coded with chapter titles drawn from the Lord’s prayer – we’ve encountered figures as unlikely and diverse as Richard III of England (sometimes merely a mercenary leader, sometimes a spectacular demon) and Christopher Columbus, and Savonarola has found himself as far afield as Hispaniola and Jerusalem. What began as a riveting historical about a fascinating figure whose self-destructive pride insured both his demise and his lasting influence ends up as a rather dizzying timeline adventure leading to a conclusion that ingeniously satisfies both the terms of its 15th-century Florentine worldview and the SF-like machinery that makes it work.