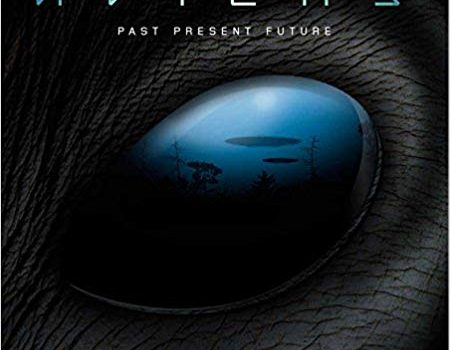 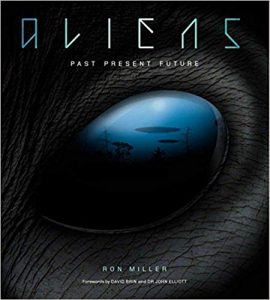 The somber, dignified cover and design of Aliens: Past, Present, Future gives no indication of how much fun this book really is. Perhaps, given the colorful, flamboyant depiction of extraterrestrial life in popular culture over, say, the past 70 years, the design decision naturally embraced the oppo­site. That is not to say that his book is unattractive or lacking in production values. It would make a perfectly good coffee table book. It takes a while to realize that the enormous lacquered elliptical object on the front cover is, in fact, an alien’s eye.

This restrained aesthetic choice is especially interesting, given that publisher Watkins Co, a specialist in self-help and spirituality publica­tions, has listed Aliens as “Conspiracy Theories & Alternative History.” Other books on the list, with far more lurid covers, include Erik Von Dan­iken’s Impossible Truths and The Illuminati by Robert Howells.

Aliens: Past, Present, Future looks at the topic of extraterrestrial life from many angles, beginning with conjectures from centuries past and moving on to chart scientific speculation and pop culture representation.

Divided into three parts, the book reviews the development of thinking about other worlds, the science of extraterrestrial life, and the impact of the idea of aliens on popular culture as well as space exploration and science.

Written and edited by award-winning author/art­ist Ron Miller (The Art of Space, 2014), Aliens is a visual feast of 200 illustrations, including antique engravings, comic art, movie posters, supposed UFO photos, and speculative drawings based on scientific theories.

The interior artwork is nicely featured: thick paper, and good color reproduction, although much of the imagery here is b&w. There are several full-page images, an index, glossary, and “further reading” list. The well-researched art only occasionally looks a bit crowded when there are three or more images on a page, but that’s a minor quibble.

The intro says it all: “It’s fun to speculate about what life might be like on other worlds… to answer it we have to look at how life came to be on our planet.” Fun indeed. A book that brings to­gether 16th-century Italian art, Aelita, Jules Verne, Klaatu, Frank R. Paul, Spock, David Bowie, and the ancient sanskrit Vedas is close to irresistible. From Looloo of Mars to E.T., the gang’s all here in the chapter on popular culture.

And, finally, we come to a quote from Jules Verne: “In spite of the opinions of certain narrow-minded people who would shut up the human race upon this globe… we shall one day travel to the moon, the planets, and the stars.”

If you prefer to consider extraterrestrial life from the comfort of your armchair, you will thoroughly enjoy this book. This elegant volume, beautifully produced, with forewords by David Brin and Dr. John Elliot, is coffee-table worthy.