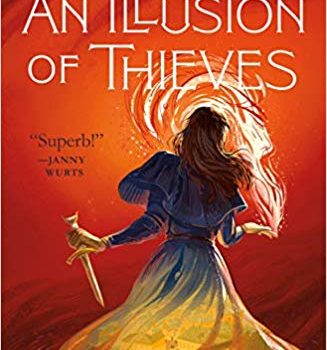 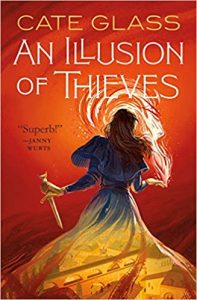 When I first heard about Cate Glass’s An Illusion of Thieves – a fantasy novel, part heist, part political thriller, and part coming-of-age story in a setting inspired by late medieval Italy – I had no idea that Glass was a pen name for notable author Carol Berg, whose novel-writing career began with the new millennium in 2000’s Trans­formation. Learning this made sense of just how accomplished a novel An Illusion of Thieves is: Glass has two decades of practice behind her. To me it feels faster, stronger, and more accessible than her work as Carol Berg.

Romy of Lizard’s Alley survived her upbringing to become courtesan to Alessandro di Gallanos, the man alternately known as Il Padroné and the Shadow Lord, the most influential – and possible the most revolutionary – nobleman in the city-state of Cantagna. Romy conceals a secret that could get her killed, though: she has magic. In the region of the Costa Drago, of which Cantagna is part, anyone found using magic is condemned to death, along with their whole family, to remove the taint.

When Romy’s father takes the blame for a theft committed by her younger brother Neri (with the aid of magic), she asks her master for mercy. Il Padroné‘s judgment spares Neri’s life, and hers, but banishes Romy from the comfortable, intel­lectual life to which she’s grown accustomed and makes her responsible for Neri’s conduct. If he steps out of line, they’ll both die.

The law is grim in Cantagna, even if the Shadow Lord tries to be fair. Throughout the story, we see Romy wrestle with her loyalty and affection for the man who gave her nine years of a comfortable life, a man who’s the best option for leadership of her city, while also not exactly being able to forget that he’s decreed her death if she and her brother fail to keep their noses clean. It’s an interesting emotional setup, and not one we see often in fantasy – though, just to be clear, there’s no romance here.

Back in Beggars’ Ring, the poverty-stricken neighbourhood of her childhood, Romy struggles to earn a living and to provide Neri with the kind of occupation that will teach him discipline and keep him out of trouble. Her acquaintance ex­pands to include two more people whom it might be dangerous for her to know, also sorcerers: a silversmith who Neri knows, and a swordsman who she pays to teach both Neri and her how to fight. When she’s approached by someone from her courtesan days – someone who threatens her in order to have her solve their problem – she will need both of them if she’s to survive and succeed.

It’s not just her own life at stake. The problem she’s being forced to solve threatens to undermine the Shadow Lord – and with him, his reforms and peace in Cantagna. Romy has to use all of her re­sources, including the magic that she despises and fears, in order to pull off the kind of heist where there’s no margin for error. Art forgery, desperate measures, and daring impersonations are at hand.

I do love a caper story. An Illusion of Thieves works its way up to a very tense and twisty caper indeed, one that plays fair with the reader and relies on what we’ve learned about the world – a world that feels broad and deep and believable – for the technicalities of the caper itself. Romy’s voice, as she narrates the events that will spell her life or death, is seriously compelling: details of survival and everyday life feel tense and real even before the caper swings fully into play.

The only issue I have with An Illusion of Thieves is that it’s nowhere near as inclusive a novel as I’ve grown used to reading in recent months. Where the likes of Gladstone’s Empress of Forever and O’Dell’s The Hound of Justice effortlessly make space for a multiplicity of different kinds of people within their pages, An Illusion of Thieves is rather more reticent. For me, that’s a disappointment.

But it’s a great caper, and I’ll definitely be looking out for a sequel. 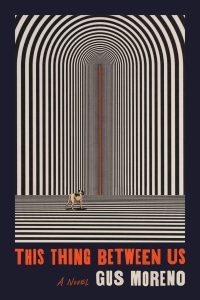