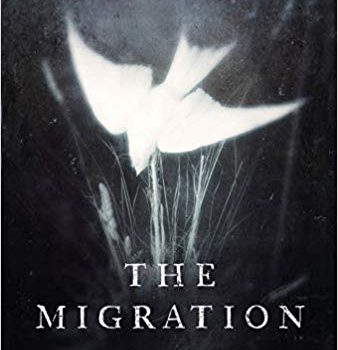 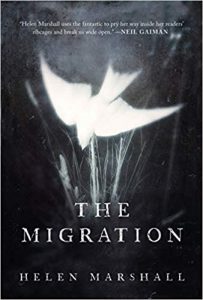 I became aware of Helen Marshall through her short fiction, particularly her stunning debut collection Hair Side, Flesh Side. The stories, laid out like the body of an angel (thanks to Kirstyn McDermott for pointing that out to me), pull off the difficult feat of com­bining the emotionally raw with the weird, the grotesque, the mythical and spiritual. Because there’s always too much to read (that’s my excuse anyway) I never got around to Marshall’s second collection Gifts for the One Who Comes After, but the announcement of her first novel wasn’t something I was going to miss.

The Migration is set just around the corner from now, where climate change has led to increased storm and flood activity and where teenagers across the planet are falling victim to a mysterious disorder called Juvenile Idiopathic Immunodeficiency Syndrome or JI2 for short. Sophie Perella, 17 and about to begin her senior year in Toronto, has her life turned on its head when her younger sister, Kira, is diagnosed with the disorder. In a bid to provide Kira with the best care, and possibly find a cure, Sophie’s mother takes both her daughters to Oxford, Eng­land, the location of a Centre that specialises in treating those with JI2. Oxford also happens to be the home of Sophie’s Aunt, Irene, a Professor of History at Oxford University who believes her research into the Black Death can shed light on the epidemiology of JI2. Theories regard­ing the Syndrome are further muddied when a video emerges of a twelve-year-old boy, struck down by the Syndrome, jerking and spasming during a post-mortem examination, the corpse showing “signs of enough cellular energy for certain genes to become active.” When the disorder claims Kira’s life, Sophie, wracked by grief, guilt, and an unwillingness to accept that her sister’s story is over, takes matters into her own hands.

According to the back cover blurb, The Migration is “creepy and atmospheric” and “evocative of Stephen King’s classic Pet Sema­tary.” The first claim is certainly true, I’m less convinced by the comparison to King. Yes, both books explore the idea of a loved one coming back from the dead, but King plays up the horror element (no surprise there), his story featuring homicidal zombie pets and children (who can forget the tagline from the movie adaptation: “Sometimes dead is better”). While horror — of the biological variety — does play a role in The Migration and certainly adds a creep-factor, Marshall’s focus is on the relationship, the bond between two sisters. It’s also telling how both authors position the motivations of their protagonists. In Pet Sematary, Louis Creed is driven mad by grief, unwilling to heed warnings about the cursed Indian burial ground that will bring his son back to life. Sophie also acts irra­tionally when she decides to steal Kira’s corpse from the hospital, except her decision is framed as the actions of a devoted and protective sister. You’re horrified by Louis Creed, but you’re sup­portive of Sophie.

While the link to Pet Sematary might be a tad tenuous (and more a marketing ploy), The Migration did remind me of James Bradley’s “The Change” trilogy (the second book of which, The Buried Ark, I reviewed in the September issue of Locus). Both novels are deeply concerned with how humanity will adapt to the catastrophic reshaping of our environment. For both authors, an infection or disorder is the means of this ad­aptation, a transformation that’s met with a great deal of fear from adults who won’t acknowledge a change to the status quo. Marshall’s Sophie and Bradley’s Callie are teenage heroines who question authority, not because they’re rebels, not because they’re contrarians, but because both of them have a deep and abiding love for their sisters. The Migration and the Change series are tonally very different, but they present us with smart and courageous young women who prioritise family and a desire for the truth above their own safety.

For all my comparisons to other authors, other works, The Migration is very much its own thing. On a sentence by sentence level, the prose is elegant, sophisticated, and sometimes simply beautiful. Marshall’s eye for story — the pacing, the way she parcels out revelations and structures her set pieces — belies the fact that this is her debut novel. Her interest in history — evident in her short fiction — adds an extra layer of depth to the story, especially the fascinating way she draws the dots between catastrophic changes in the environment and the spread of plague, such as the Black Death. What shines through though, is Marshall’s empathy for her characters, not just Sophie but also those who help and sometimes hinder her. The Migration is a captivating, intel­ligent, and compassionate novel that portrays the unbreakable bond between two sisters in a world facing environmental upheaval. 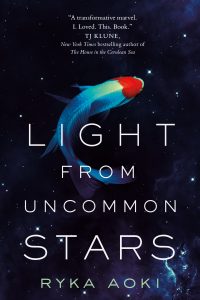 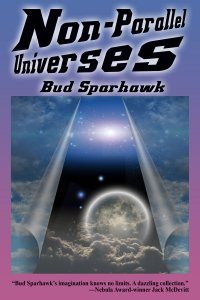 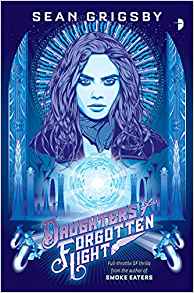