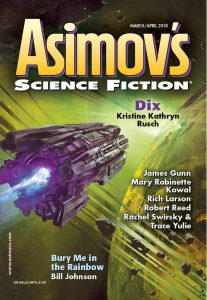 The March/April Asimov’s is a strong issue. Ray Nayler’s “A Threnody for Hazan” is melancholy story about a scientist who is trying to develop a dangerous, potently fatal method of time-travel, and her complex relation­ship with her colleague (and, eventually, lover) who is willing to give up everything in order to support her, even if it means losing her. Bill Johnson’s novella “Bury Me in the Rainbow” is a sequel to his “We Will Drink a Fish Together”, which won the Hugo Award all the way back in 1998. The story deals with the tricky negotiations with aliens, who are trying to get the residents of a remote small town in Dakota to immigrate to their moon-sized spaceship as representatives of the human race. The most fascinating thing about the story is that the negotiations between various factions of the people in the town, arguing whether or not to move to the alien ship, are even more complex than the negotiations between the humans and the aliens – and the way that political factions of both aliens and humans interact with each other in complicated ways, with intrigue and double-dealing, and high stakes at risk, on both sides. The story is obviously a set up for another sequel, and let’s hope it doesn’t take Johnson another 20 years to produce one.

James Van Pelt takes us to a colony world where the colonists face unexpected dangers after the loss of their spaceship, and travel down a mighty river in a makeshift steamboat in a des­perate and deadly race against time in “Queen of the River: The Harbor Hope”. In “Dix”, part of her Fleet series, Kristine Kathryn Rusch tells us of a race against time of a different sort, as the crew of a spaceship struggle to repair a space drive sabotaged by a suicidal colleague before it explodes and wipes out everything around it. Rich Larson takes us along with astronauts ex­ploring a bizarre alien phenomenon on the moon and coming to bitterly regret it, in “In Event of Moon Disaster”. Rachel Swirsky & Trace Yulie join forces to tell the story of a pregnant young woman who inadvertently finds herself an integral part of an alien cycle of reproduction in “Seven Months Out and Two to Go”. A per­sonality modification program has unexpected results in “Love Songs for the Very Awful” by Robert Reed. “The Billows of Sarto” by Sean Monaghan is nicely executed, but the science fiction element is very thin – about a man meeting a woman and them eventually courting each other while on vacation, it could take place in any hot springs or caldera in the world, with very little needing to be changed.

The best stories in a good March/April Analog are “The Spires” by Alec Nevala-Lee and “The Tailgunner’s Lament” by Brendan DuBois. “The Spires” is a scientifically rationalized For­tean story, taking place in the Great Depression years of the ‘30s. A bush pilot acts as reluctant guide for a pair of scientists attempting to observe and explain the phenomenon of the mirage of a city in the sky that appears in the same place at the same time every year. Their explanation is ingenious, and, although they don’t live long enough to see the source of the mirage, which isn’t there for generations into their future, they prove to be more or less correct – with some significantly different details. “The Tailgunner’s Lament” takes place on a small Pacific island used as a forward base for American bombers attacking Japan during WWII, and is a poignant and emotionally powerful story about the hope for a better future given by reading science fiction, a hope that most SF readers have experienced themselves at one time or another, and which is still one of the reasons people become habitual SF fans. (I doubt that DuBois has ever read it, but the plotline here is similar to one of James Tip­tree, Jr.’s more obscure and little-known stories, “Beam Us Home” – a different war, but much the same emotional freight.)

Suzanne Palmer’s “The Streaming Man” deals with a man who becomes famous for the implants that produce musical sounds every time he moves, and the emotional cost of being hounded by legions of fanatical fans who follow his “music” as it streams on social media and who drive him to the brink of self-destruction. James Van Pelt shows us how an incident in the midst of a childhood catastrophe inspires a man to devote the rest of his life to the Search For Ex­traterrestrial Intelligence, in “Big Thompson”. A woman struggles to be able to afford an experi­mental medical treatment for her dying husband in Susan Forest’s “Sun Splashed Fields and Far Blue Mountains”, and a scientist reluctantly explores an enigma, and comes to regret it, in Nick Wolven’s “Lab-B-15”.

The best story in the February Clarkesworld is “Umbernight” by Carolyn Ives Gilman. In one of those coincidences that happen every once in a while, the backstory here is very much like that of Van Pelt’s “Queen of the River: The Harbor Hope”, mentioned above: a ship of colonists tries to found a settlement on a new planet, only to find that the environment is very different from what advance scouting had led them to expect, which makes survival much more difficult than they anticipated. Gilman’s planetary environ­ment, aptly named “Dust,” is even more lethal and inhospitable to life than Van Pelt’s, with an undiscovered X-ray star spraying the surface with hard radiation at regular intervals, causing the would-be colonists to take shelter in a cave for years at a time. After three generations, the Spring on Dust, such as it is, is drawing to a close with the radiation-spitting star Umber about to rise, producing what the colonists have come to call “Umbernight,” when they must retreat to their cave refuge, and anyone who goes outside will be fried with a lethal dose of radiation. But a supply drone ship is on the way from Earth, which could be carrying vital and irreplaceable supplies, and, reluctantly, a grizzled veteran (who spends her time when it’s safe to go outside mapping the surrounding territory), agrees to make a dash for the landing site to recover the supplies before Umbernight begins, accompanied by a group of enthusiastic young volunteers who don’t really appreciate the danger they’ll be facing. Caught outside by an early rising of Umbernight, the crew not only faces almost certain death, but makes a totally unexpected discovery that will transform human understanding of the ecosystem on Dust, with major implications for the future. “Umber­night” is one of the best stories published so far this year: suspenseful, ingenious, and emotionally affecting.

Also in the February Clarkesworld is Robert Reed’s clever “Obliteration”, in which a man has to learn to deal with an unfortunate accident that has wiped the memories of the last nine years of his life which he’d stored on an implanted memory chip – now he must decide if he’s better or worse off without them. In “Deep Down in the Cloud” by Julie Nováková, also in February, a group of hacker/saboteurs use their diving skills to try to raid and disable an undersea corporate information cache, striking from below, under the cover of a powerful storm. “The Power is Out” by A Que deals with the aftermath of a takedown of the worldwide electrical and computer system; the disaster is all-too-likely, but I found the actions of the people who’d survived the catastrophe, and their reaction to dealing with it (basically, to do nothing but scrounge for food in the ruins of the former civilization) extremely unlikely; I have more faith in human resilience and ingenuity than that.

The February Lightspeed gives us “The Goddess Has Many Faces” by Ashok K. Banker, in which an assassin accepts what seems to be the easiest mission of his career, only to find himself deal­ing with religious faith that can’t be assassinated, and “Four-Point Affective Calibration” by Bogi Takács, in which an autistic scientist is being groomed to attempt communication with aliens – a task he feels that he’ll have no difficulty with, since it’s always been humans whom he has had trouble understanding.