Despite a career of more than 20 years, Peter Watts has published only a handful of novels and a not much larger handful of stories, which nevertheless have given him a solid reputation as a sharp and incisive stylist with a rather tragic, if clear-eyed, view of human nature, and the capacity for some remarkable hard-SF inventions. He argues in the Afterword to his new collection Beyond the Rift (his first, unless you count a not widely seen Tesseracts volume over a decade ago) that he’s really an optimist, that he can’t really write villains, that his sometimes dystopic worldview is something he’s inherited rather than invented, and he’s right on all counts; his only real dystopia here – apart from Watts’s nonfiction account of his encounter with US border guards in the Afterword, which seemed pretty dystopian – is ‘‘A Word for Heathens’’, set in an alternate-history Christian theocracy in which neurological implants reinforce the certainty of religious truth and in which brain tumors are viewed as demons to be exorcised. It’s cautionary only in the sense that it portrays the world that could result if belief were replaced by certainty (something like the Tea Party running about a thousand years of history) but we come away feeling that whatever irrationality we have to contend with, we’re not in that world. Even the grimmest dystopias are essentially cautionary tales, and we wouldn’t call them cautionary if we didn’t believe ourselves capable of precaution; hence, although admittedly by some circuitous reasoning, writers like Watts tend to be optimists, just like he says.

But Watts is also a hard SF writer, and even that Christian neurotheocracy draws on actual neurological experiments that supposedly induced religious visions via controlled electromagnetic fields. In perhaps his most famous story, the Hugo-winning ‘‘The Things’’, he says he’s writing movie fanfic, and certainly the story resonates with anyone who loved any of the various film versions of Campbell’s story (especially John Carpenter’s), but in shifting the point of view to that of the alien, he not only recasts it as something far different from the original monster tale, but makes a game effort to reclaim the original’s wonky science into somewhat more credible speculative biology. His best story, ‘‘The Island’’, features a classic large-scale SF invention, a living membrane surrounding an entire dwarf star, as well as a classic hard-SF conflict between the humane narrator who wants to save the intelligent ‘‘island’’ on part of the membrane, and the mission’s program, which sees no reason to do so (‘‘I am sick of being outnumbered by morons,’’ the narrator says at one point, echoing the classic rationalist humanist’s plight throughout SF). Another classic scenario, first contact, is the focus of ‘‘Ambassador’’, in which the mostly human, genetically engineered narrator finds himself pursued relentlessly by an apparently motiveless alien craft, causing him to question common SF assumptions about what advanced spacefaring technology implies about the culture that created it, if anything.

Watts’s original niche in hard SF was the expertise in marine biology evident in his first novel Starfish, and the oldest selection here (appropriately entitled ‘‘A Niche’’, though obviously for a different reason) is a tense psychological study of a pair of deep-sea researchers in the Juan de Fuca rift; it was also the kernel of that novel, and essentially its second chapter. An even more grim view of deep-sea exploration is ‘‘Home’’, in which we learn that a subhuman marine creature making its way instinctively toward a goal it doesn’t remember is in fact a long-lost, biomechanically altered human explorer. This story in turn reflects a recurring theme in Watts, though seldom as foregrounded: the limits of what it means to be human. I can’t quite imagine Watts doing a literal zombie story, but it may be no accident that ‘‘Zombie’’ shows up as the name of a spaceship in ‘‘Ambassador’’ (whose own narrator has reason to question his humanity) and of a family pet in ‘‘Flesh Made Word’’, in which a researcher, obsessively studying dying brains long after his wife’s death, concludes that ‘‘you die from the outside in,’’ contracting to a prehuman limbic system before death. The most emotionally wrenching such tale, and in fact in the entire book, is the collaboration with Derryl Murphy, ‘‘Mayfly’’, in which a four-year-old born with severe brain damage is connected by cable to a server which replaces her brain function with a kind of artificial intelligence – until a series of violent outbursts reveal the terrifying disconnect between her real processing speed and the limits of her physical body to contain it.

Of the remaining stories, the most interesting is ‘‘The Second Coming of Jasmine Fitzgerald’’, in which a brilliant doctoral student in physics brutally and inexplicably butchers her cancer-ridden husband. It’s a good pulpish hook, and the story plays out in a similarly pulpish way – an apparently mad scientist whose notions of the observer-reality interface of quantum physics may not turn out as mad as they seem (Murray Leinster could have written such a story, with only slightly less sophisticated physics). ‘‘The Eyes of God’’ is a technology-out-of-control tale which imagines that airport scanners could get sophisticated enough to detect potential criminals, threatening privacy in a way the TSA could only (and probably does) dream about. ‘‘Nimbus’’, though skilfully written, offers the silliest idea – self-aware intelligent thunderstorms – which might make a kind of Bradburyesque metaphorical sense (think of ‘‘The Wind’’) if Watts didn’t make at least a token effort at hard-SF credibility. The two shortest pieces, drawn from Nature’s ongoing series, are ‘‘Hillcrest vs. Velikovsky’’, a waggish satire about a curator of a museum of pseudoscience charged with negligent homicide after his exhibit caused a devout creationist to question the faith that she believed kept her cancer in remission, and ‘‘Repeating the Past’’, in which a Holocaust survivor, narrating in second person, finds a neurological way to teach his contemptuous punk grandson a lesson. Both, in a particularly mordant way, are satisfying comeuppance stories, but maybe that’s the kind of optimist Watts is. His grimmest stories celebrate at least the possibility of survival, while his lightest ones touch upon things like the Holocaust and faith-based reality-denial. There are plenty of boneheads in his fiction, but hey, we’re not all boneheads all the time. Can’t get much more cheerful than that. 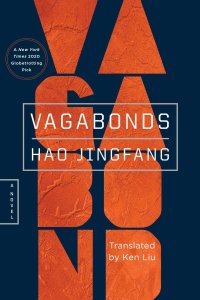