The second novel in the Owner series continues the story of that powerful immortal in a grim 22nd century, a mix of ‘‘psychological-moral-political drama’’ and ‘‘highly kinetic action-movie stuff, with industrial quantities of death-dealing up and down the scale, from space battles to hand-to-hand single combat, laid out in parallel-plotted, cross-cut, near-Saturday-matinée cliffhanger mode.’’ [Russell Letson] First published by Tor UK (3/13).

The first collection from an author gaining attention for his exploration of human nature mixed with darker elements, this presents nine stories (one new), including ‘‘The Monsters of Heaven’’, winner of the inaugural Shirley Jackson Award.

Banks’s last novel is a mainstream tale of a strange, socially disabled young man trying to deal with his father’s impending death from cancer. A book about life as much as death, leavened with dark humor, and all the more touching knowing Banks died of the same disease.

Collection of 14 stories. ‘‘One of the pleasures of Blumlein’s stories is the contrast between their calm style and the extreme strangeness of the events being portrayed… deep and wonderful.’’ [Rudy Rucker, ‘‘Introduction’’]

Bond’s second novel presents a different sort of fantasy, set in a world still coping with the reappearance of the gods of various pantheons only five years before. Kyra Locke searches for her missing father with the help of an operative of the Society of the Sun, a mysterious organization that polices the gods with the help of powerful relics.

The latest year’s-best volume from one of the field’s most respected editors presents 28 stories from 2012, by authors including Terry Dowling, Margo Lanagan, Conrad Williams, and Laird Barron. Datlow provides her usual insightful summary of the year in horror.

The quirky sword & sorcery adventures of Morlock Ambrosius continue in this second book in the second (prequel) trilogy, A Tournament of Shadows, as Morlock investigating the threat of invasion by gods with a particular hatred for Morlock’s family. ‘‘Enge is in fine form here again, as strange and clever as ever.’’ [Tim Pratt 7/13]

Two boys on their own on opposite sides of the world meet when their countries go to war in this wild steampunk fantasy adventure mixing old fashioned pulp adventure with elements of literature and myth, the fifth novel set in the world introduced in The Court of the Air. Originally published in the UK by Voyager (7/11).

Magical realism and alternate history mix in this striking first novel, a tale of the real Christopher Robin Milne, AKA Billy Moon, who gets a strange letter calling him to France, where he gets caught up in student protests in 1968 France. ‘‘Billy Moon brings its two plot threads, neither one quite mainstream, together in a mix-up of fact and fancy, grand hopes and desperate fears, that might become powerful enough to tweak the nature of reality himself… Lain makes the whole mad concoction come to life.’’ [Faren Miller]

This lively space opera novel is set in the region of the asteroid belt more than 1,500 years after events of the Quiet War, following a young salvage-merchant seeking revenge on the pirates who hijacked his family’s ship, traveling through an end-of-empire SF setting full full of secrets, assassins, pirates, con men, cultists, bureaucrats, and more. ‘‘McAuley is having a good deal of fun laying out what amounts to a tribute to classic space opera, and Evening’s Empires, while not lacking in the snazzy mise-en-scene spectacle or the philosophical debates of the earlier novels, is the most purely enjoyable straight adventure tale in the Quiet War series so far.’’ [Gary K. Wolfe]

Wolfe is honored in this anthology of 19 all-new stories – two by Wolfe himself, the rest by a stellar roster of authors including Neil Gaiman, Joe Haldeman, Nancy Kress, Jack Dann, Michael Swanwick, and David Brin.

Robinson turns his formidable talents to painting a picture of the Paleolithic world of a young shaman with an artistic bent in this solidly researched prehistoric novel. ‘‘A fully realized, character-based novel…. Werner Herzog asks, ‘Will we ever be able to understand the vision of the artist across such an abyss of time?’ Robinson’s answer is as haunting as the question itself.’’ [Gary K. Wolfe]

The latest volume in this valuable series collects 13 stories, the cream of Silverberg’s output from 1990-95, with his usual wry commentary on the field at the time and the writing of the stories themselves. 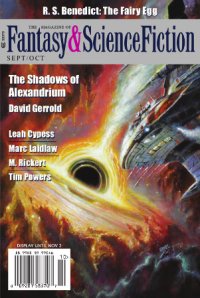 Michael A. Arnzen has won four Bram Stoker Awards (including one for Poetry) and has been publishing speculative fiction and poetry since 1989. His latest book is The Gorelets Omnibus: Collected Poetry, 2001-2011 (Raw Dog Screaming Press, 2012) — a compendium of his twisted and often funny imaginations from the past decade. Arnzen holds a PhD in literature and teaches in the MFA program in Writing Popular Fiction at Seton