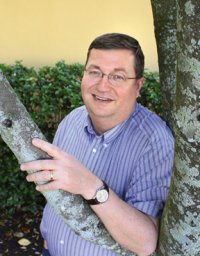 James Gunn was—indeed, still is—one of my heroes. While I didn’t meet him until 2002, when I first went to Lawrence for the Sturgeon Award ceremony, I already admired his writing, both fiction and non-fiction, and had benefited greatly from his expansive, benevolent influence on science fiction as critic, anthologist, conference organizer and educator.

Sitting rapt in Jim’s KU office as he talked about the field he loved, I realized that my own mentor John Kessel had sat there just the same, as Jim’s student in the 1970s.

Kessel was my thesis director at North Carolina State University, and for years afterward, I passed to my own writing students the scores of aphorisms I learned from him. One day, when I did this in his presence, Kessel fidgeted and cleared his throat and confessed that he had stolen most of those aphorisms from Jim Gunn.

When I asked Jim for confirmation of this, he said, “Yes, that’s probably true, but they were stolen goods to start with, and they’re John’s now—or yours, if you use them.” He then added, with a twinkle, “At some point, one of us probably should come up with new material.”

I don’t think I ever saw Jim laugh, but he twinkled a lot. And you always could tell when you had his full attention, because he turned to face you full-on, looked into your eyes and became perfectly still, seeming to listen with his whole body, with an intensity that was almost unnerving.

One of John Kessel’s aphorisms (probably a Jim Gunn aphorism) is, “You write about what bothers you.” It may be telling, then, that Jim’s classic novel about SETI—an inspiration to Carl Sagan and countless others—is titled The Listeners.

According to Mark R. Kelly’s invaluable Science Fiction Awards Database, only one of Jim’s fictions ever won an award (“The Giftie”, which won the Analog Readers Poll in 2000), but he deservedly won every career honor in the field, including being a Guest of Honor at LoneStarCon III, the 2013 Worldcon.

According to Jim, he was pleased to accept when the call came, but he felt the need to advise the conrunners: “That summer will be my 90th birthday, so keep in mind I may not last that long.” The reply was basically, “We like the odds, Jim.”

I was privileged to be in the room at the 2015 Locus Awards Weekend in Seattle, where Jim was inducted into the Science Fiction and Fantasy Hall of Fame. Jim was there in person thanks to an online fund-raiser with many contributors, and to his friend Michael R. Page’s willingness to come along, just in case—though Michael told me he was hard pressed to keep up, as his 92-year-old charge was always far ahead, strolling jauntily through the airports of North America.

Soon after arrival, Jim was taken to lunch at a Seattle restaurant decorated with mid-20th-century kitsch, and was seated in a booth directly beneath the framed cover of a Thrilling Wonder Stories issue from 1949—one that contained a Jim Gunn story!

Later that weekend, I somehow got invited to a Locus dinner with Jim and Connie Willis, and I still consider our conversation at the restaurant to be my best convention panel ever, though it was, strictly speaking, only convention-adjacent. Of our many topics, I remember only that we championed Carroll’s Alice as one of the great characters of literature. I also remember that the three of us all talked at once and scarcely stopped even to breathe, much less eat. We must have consumed our dinners intravenously, or by osmosis.

I got to introduce Jim to a number of my Clarion West students that weekend, and watching them chat gave me a chill, as I thought about the previous generations of writers he had mingled with.

For seven years, I had the privilege of serving with Jim on the Sturgeon Award jury, where I got to see firsthand his ongoing, devoted engagement with 21st-century science fiction and the works of writers 60 years his junior.

One of my own stories, “New Frontiers of the Mind”, was born in conversation with Jim, as we sat side by side during a noisy party at the Lawrence home of paleontologist Larry Martin. Jim turned to me and asked, innocently enough, “What are you working on, Andy?” 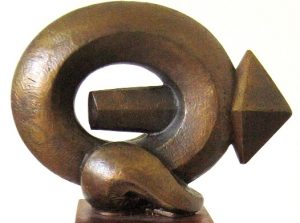 That led to a happy one-hour brainstorming session, as the other guests milled around us, at the end of which Jim said: “Not only will that be a good story, but it’ll be an Andy Duncan story, and when you finish it, you should send it to Analog, and tell them I sent you.” Then he made a one-handed “voila” gesture, like a master illusionist finishing a trick, and added: “No power will prevent their taking it.”

They did, eventually, but not before Jim made another significant contribution. He was the first person after my wife and first reader, Sydney, to see the full-draft manuscript. He read it the day it arrived and made an immediate big suggestion, via return email, that improved the story tenfold. When I thanked him later, he demurred, as usual, and said: “It’s still an Andy Duncan story, though. That’s important.”

It certainly was to Jim Gunn. While we all would do well to write a novel as good as The Listeners, he wanted us all to write not Jim Gunn stories but our own stories, within a vast expanse of sf traditions (plural) stretching as far back as Gilgamesh—so Jim’s anthologies reminded us—and forward past this year’s awards ballots and this week’s digital debuts.

Jim dedicated the third volume of his Road to Science Fiction series “To all the writers of science fiction yet to be.” He dedicated his career similarly.

I will write a lot more about him, when I have sorted through my memories, but for now, RIP Jim Gunn, a model for staying young in any field.

Year's Best Reviews and their Effects on Reviewers

It All Started When: Joe Haldeman