Alternate history SF novel set 700 years after the Nazis took power and Adolf Hitler is worshipped as a god.
• “Murray Constantine” was a pseudonym for Katharine Burdekin (1896-1963).
• Orion’s site has this description.

Reprint of The Mammoth Book of Frankenstein from 1994.
• Contents include a foreword by Neil Gaiman and three complete novels, including Mary Shelley’s Frankenstein. Other stories are by Paul McAuley, Ramsey Campbell, Robert Bloch, John Brunner, Karl Edward Wagner, and Kim Newman.
• The publisher’s site has this description.

Anthropological SF novel about the Kesh, a matriarchal society in a far-future Napa Valley, and consisting of various stories, reports, and songs by the Kesh themselves.
• Orion’s site has this description.
• Wikipedia has this substantial entry about the book.

Post-apocalyptic horror novel about the battle between good and evil over the fate of humanity.
• Simon and Schuster’s site has this description with a Google preview.
• The novel won the Bram Stoker Award in 1988 (tying with Stephen King’s Misery).

Young adult fantasy novel, “Inspired by an idea from Siobhan Dowd”, about a 13-year-old boy who is visited by a monster with three parables, demanding that the boy respond with his own, true, stories.
• This is a movie tie-in edition, omitting the Jim Kay illustrations from earlier editions. Candlewick’s site has this description.
• The movie version opens October 21st.
• The original illustrated edition won a Kitschies Award for Best Novel in 2012.

Feminist utopian novel about a woman in a mental institution shown alternative utopian and dystopian visions of future society.
• This is a 40th anniversary edition with a new introduction by the author.
• Penguin UK’s site has this description.
• Amazon’s “Look Inside” function provides previews, including a portion of the new introduction.
• Wikipedia has this plot summary. 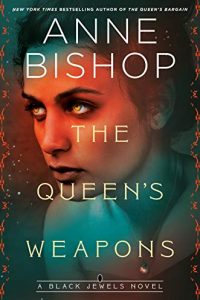 [Editor’s note: part of our 2017 year-in-review essay series from the February 2018 issue of Locus] According to Barnes & Noble’s year-end summary, if we set aside J.K. Rowl­ing and Rick Riordan, the bestselling genre-related novel of 2017 was Mar­garet Atwood’s The Handmaid’s Tale, followed a few slots later by Stephen King’s It – novels originally published in 1985 and 1986, respectively. Ama­zon’s list adds Orwell’s 1984 (from way back