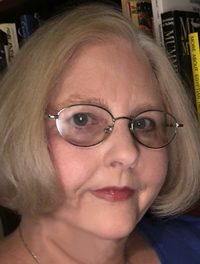 The 1000 Years of Fandom project launched at Worldcon 76. The pictorial project, run by FANAC.org, was started by Mark Olson, who photographed groups of new and longtime fans, all holding signs listing how many years they’ve been involved in fandom. Two of the photos exceeded 1,000 years of fannish activity, and in all the project photographed 6,707 years of fandom. Fans are encour­aged to participate by sending photos of

Novels of the year (halftime report)