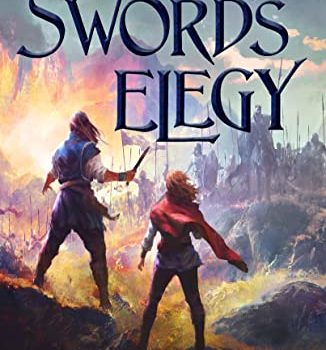 Fantasy novel, the third in the Sorcerer’s Song series about a reluctant bard-turned-assassin.The doom of humankind has at last been realized. Belkar’s prison is broken and his army is on the move. The nations of Lamoria, unaware of the greater danger, look to repel the aggression of Ralmarstad.

Military SF novel, the second book in the Trinity’s Children series. Jared Clement has returned to Trinity, not as a mere ship captain but as a Five Suns Fleet Admiral. With his promotion comes responsibility for the settlers who are leaving the dying planets of the Rim and resettling next to the natives of the planet Bellus.

Young-adult dark fantasy novel, the first in the Mirror Realm series. Alice turns 18 and learns she’s a huntress, able to pass through mirrors into the magical Mirror Realm, where she must fight demons to keep evil at bay.

Collection/omnibus of three novellas. Includes “Masquerade In Lodi”, “The Orphans of Raspay”, and “The Physicians of Vilnoc”, all featuring Penric and Desdemona, set in the World of the Five Gods.

Young-adult contemporary fantasy novel about a strange town protected from deadly woods by the Luminaries, an ancient society of guardians, and young Winnie’s determination to prove herself in their deadly trials and join them.

Drapp, Jen: Eye of the Falcon

Young-adult fantasy novel, the first in the series The Protectors. The Protectors search for the Eye of Horus and the one who is destined to return it, which might be 17-year-old Re Fuller, who just discovered an ancient Egyptian amulet which awakened dangerous powers within him.

SF novel in Flint’s Ring of Fire series. Up-timer Morris Roth and his Grand Army of the Sunrise push east through Europe in hope of preventing the Chmielnicki Pogrom of 1648.

Young-adult dark fantasy/horror novel. Ava’s search for revenge against the vampire who killed her mother leads to a secret society of magicians.

Henson, Fatima R.: Love in the Age of Dragons

Fantasy novel. Two years ago, a wormhole opened and ushered vicious dragons into the world. Since then, Ayanna Grace, a seventeen-year-old Black girl, has been scratching out a life in an abandoned subway system, part of an extensive underground community.

Fantasy novel. Set in Rhode Island in 1846, writer Merritt Fernsby unexpectedly inherits a remote estate, which turns out to be bespelled and prone to tantrums — and it won’t let him leave.

Jemisin, N.K.: The World We Make

Contemporary fantasy novel set in New York City, the final book in the Great Cities duology. Though the avatars of New York City have temporarily managed to stop the Woman in White from invading — and destroying the entire universe in the process — the mysterious capital “E” Enemy has more subtle powers at her disposal.

While the wide-screen narratives involving the multiverse, or Manhattan’s repeated efforts to convince the other awakened cities to convene a summit to organize against R’Lyeh, are persuasive in their own way, it’s the scenes of diverse everyday New Yorkers – scrappy, outspoken, and sometime rude – that finally lend The World We Make the rich texture of a love letter to a complicated city and the resilient spirit of its residents.

Epic fantasy novel of Vikings and Norse gods, the third in the Hanged God trilogy. Ragnarok has begun, and only a storyteller and a shieldmaiden can prevent the annihilation of the nine worlds.

Martell, Nick: The Voyage of the Forgotten

Epic fantasy novel, the third in the Legacy of the Mercenary King series. Michael, the infamous Kingkiller, and Serena, the Hollow Queen, race against the odds to have the future they’ve worked so hard to protect… or risk bringing about the end of the world.

SF space opera/queer romance novel, set in the same universe as Winter’s Orbit. A charming rogue caught using his mind-reading powers illegally gets stuck in the military, bonded mentally with an Architect who controls others’ minds, and the two unexpectedly set off a coup.

Collection of 32 stories, many of them rare. Includes an introduction by Tom Easton. A signed, limited edition of 1000.

Mix, Rebecca: The Ones We Burn

Young-adult sapphic dark fantasy novel. The witch Ranka is named to be a treaty bride and ordered to kill the human prince she’s to marry.

Near-future dystopian/mystery novel. When a doctor is murdered in the wealthy, corporate-run Town, police automatically look for an outcast “Saha” suspect — but the accused’s sister is determined to clear him.  Translated by Jamie Chang.

Horror/mystery novel. A woman who sees brief glimpses of the future returns home after her abusive father’s death, and discovers women in town have been vanishing.

Near future SF novel set in Africa, about the race to build the first space elevator near Mount Kilimanjaro.

Probert, John Llewellyn: How Grim Was My Valley

Folk horror novel, a portmanteau novel made up of fragments. Robert wakes up on the Welsh side of the Severn Bridge with no memory of who he is or how he got there. Determined to reclaim his identity, he embarks on an odyssey through the country of Wales. Introduction by Ramsey Campbell.

Best of the year anthology, the eighth in the series, with stories from 2022. Introduction by Roanhorse; foreword by series editor John Joseph Adams, who also provides his own list of notable stories.

Robins, Eden: When Franny Stands Up

Fantasy novel about a female stand-up comedian in the 1950s, who finds literal magic in laughter — but it only works on women.

Horror novel. Animals start to disappear in a small town, and a boy’s efforts to help his dog reveal an old, evil town secret.

Shepard, Sara: Wait for Me

Young-adult paranormal mystery romance novel. Casey hears a voice in her head that leads her to a small town that is strangely familiar.

Short SF novel, a darkly humorous and occasionally strange/unreal tale of the Glass Drifters, musicians on tour heading for a mysterious gig that might make — or end — their careers. This is a signed, limited edition of 750, printed in two colors throughout.

Victoria, Emily: Silver in the Mist 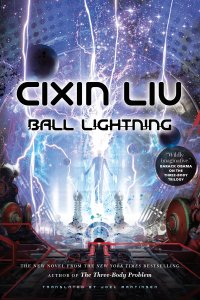 Tell us about your debut novel Scarlet Odyssey. What’s it about, and what inspired you to write it? Scarlet Odyssey follows a young man whose bookish nature and affinity for magic puts him at odds with the rest of his society, in which the path of books and magic is considered feminine, while the art of warfare is seen as the worthiest masculine pursuit. As the first-born son of a