A recent Small Press Spotlight feature at SF Signal focused on ChiZine press, publishers of the novel under consideration here today. Reporter Justin Landon examined ChiZine as a determined purveyor of the unconventional, the weird, the odd, even the transgressive, and found them living solidly and boldly up to their mission statement. Certainly, John Park’s quietly effective exercise in eerie world-building and conspiracy mind games satisfies our appetites for strong-meat, offbeat material the Big Six houses tend to ignore. It will certainly appeal to anyone who ever enjoyed George Alec Effinger’s The Wolves of Memory; Adam Roberts’s Salt; Jonathan Lethem’s Girl in Landscape; or Philip K. Dick’s Clans of the Alphane Moon.

We start with some very effective and spooky planetary characterization. The world of Janus is limned by Park in vivid detail, without going overboard into a “suffer for my research” drone of needless trivia. The planet’s alien ecology, its multiple moons, its empty vastness—all these are conveyed in poetic ways with delicate yet robust touches. What we have is a kind of haunted planet, where the tiny human presence seems precarious and misguided. Compare this affect to, say, that in Kim Stanley Robinson’s Mars books, where, arguably, the human explorers face similar perils and loneliness. It’s two different beasts. In Janus, a vibe like that of the fabled lost Roanoke Colony is conjured up. One expects to see “Croatoan” scrawled on the building walls at any minute. And in fact mysterious written proclamations do begin to appear. They are intimately connected with the uncanny nature of the colonization effort.

The human settlement, you see, is populated in large part by amnesia victims: partial, total, or perhaps whole minds just faking. Travel to Janus occurs thorough a kind of wormhole dubbed The Knot, which has the quantum side effect of wiping minds spottily blank.

Our hero, Jon Grebbel, newly arrived, awakens knowing very little personal information about himself—not even why he chose to emigrate. He is inserted by the authorities into a manual-labor job and a semi-socialized existence, but of course it’s all very tentative and unsatisfactory. (And the fact that Park can make us empathize so tightly with a fellow who is in essence a cipher, lacking the typical deep portrait that causes readers to bond with any character, is testament to Park’s skills.)

Meanwhile, longtime settler Elinda Michaels is having deracinating tribulations of her own. Her lover Barbara has gone missing from a walkabout, and, when she is found alive but inexplicably brain-damaged, Elinda’s life begins to unravel. Finding solace in each other’s company, Jon and Elinda start to confront the hidden truths and lost bits of the Janus colony. But the question becomes: can their nascent love survive the revelations derived from recovered memories? And can the colony itself withstand such assaults?

Park unfolds his story in a deliberate, slow-paced, incremental manner. There are never any real longueurs, and there are even some genuine action sequences, suspenseful and taut. But for the most part, his narrative is one of minute unfoldings and internal readjustments, a voyage through Ballardian inner space. The exterior circumstances of the colony are important in the plot, evidence of a vast establishment crime committed against the settlers. But the real damage is on the inside. When Jon discloses his true nature to Elinda in Chapter Twelve, all the real issues—past versus present and future; sins versus repentance; love versus revenge—crystallize. If this book were to be filmed, it would take a Tarkovsky or Gondry to do the job, not a Spielberg or Whedon.

So this aspect of the book slots it neatly into the ChiZine family. Publishers looking for the next bestselling fantasy trilogy are unlikely to place big bets on such a novel. But certainly a second feature of the novel militates against its inclusion in any Big Six catalogue: its “downer” nature. Now, I use that term ironically, recognizing the word’s prejudices. More accurately, Janus and its author possess what Brian Aldiss for one affirms is a very valuable thing: a tragic view of the universe. Not only is the basic setup of the colony on Janus tragic, but the actual ending of the book is too. This is not to say some rays of hope do not filter through for surviving characters. But overall, the book conveys a feeling of immense waste and loss due to humanity’s original sins of uncaringness and utilitarianism. This kind of novel is ultimately, I think, life-affirming and vital for the maturation of readerly sensibilities. But it’s hardly a feel-good page-turner.

Of course, to enjoy one of those kind of books whole-heartedly, you often need to impose a temporary amnesia upon yourself, and John Park has shown us just where that leads! 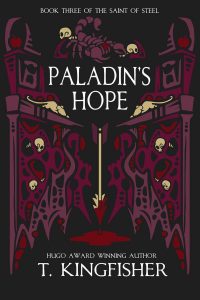