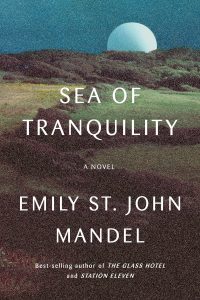 There is this wink-to-the-audience moment about halfway through Sea of Tranquility where Olive Llewellyn, bestselling author of Marienbad, is asked what it’s like to have written such a successful book.

Oh. It’s surreal, actually. I wrote three books that no one noticed, no distribution beyond the moon colonies… when I published Marienbad, I somehow fell into a bizarre upside-down world where people actually read my work. It’s extraordinary. I hope I never get used to it.

Moon colonies aside, the trajectory of Olive’s career cheekily mimics that of Emily St. John Mandel. Like Olive, she experienced stratospheric levels of success with the publication of her fourth book Station Eleven, the popularity of which – adapted into a brilliant mini-series by HBO (seriously, go watch it) – saw Mandel change lanes from literary noir to literary speculative fic­tion. Her follow up, The Glass Hotel, a Bernie Madoff-inspired ghost story that’s both moving and beautifully written, is set in a reality adjacent to Station Eleven, referencing the Georgia Flu (whose spread is halted) and featuring guest ap­pearances from Miranda Carroll and Leon Prevant. And now comes Sea of Tranquility, a short novel that, amongst other things, is a sequel to The Glass Hotel, a meta-fictional commentary on Station Eleven, and a work that embraces the core tropes of genre fiction, imagining a far future of moon colonies, a climate affected Earth and time travel.

Sea of Tranquility begins in the early part of the 20th century. Eighteen-year-old Edwin St. Andrew, banished by his father for daring to question the splendour of the Raj, is making his way to the tiny British Columbia settlement of Caiette (the future location of the titular Glass Hotel). One day, while walking through the for­est, Edwin is brought to his knees by a ‘‘flash of darkness’’ where

He has an impression of being in some vast interior, something like a train station or a cathedral, and there are notes of violin music, there are other people around him, and then an incomprehensible sound.

Shortly after this bewildering experience, Ed­win encounters a strange man named Roberts, claiming to be the settlement’s priest, with a desire to know more about the anomaly Edwin glimpsed. We skip forward a century and encounter Mirella Kessler, whom readers will recall from The Glass Hotel. She has come to New York to enquire about the whereabouts of Vincent Smith. They were once best friends, that is until the Ponzi scheme run by Vincent’s husband, Jonathan Alkaitis, collapsed. Following a concert composed by Vincent’s brother Paul, where he shows the audi­ence a glitchy film made by his sister in the forest of Caiette, Mirella and Paul are approached by a man going by the name Gaspery Roberts with questions about Vincent’s video. Fast forward another two hundred years, and the aforemen­tioned Olive Llewelyn, an inhabitant of Moon Colony Two, is on Earth for a book tour. While she travels the planet, speaking about the reis­sue of her pandemic novel Marienbad, Olive is made aware of a new virus spreading worldwide. Initially, she’s only mildly concerned, that is until she is interviewed by a journalist with an uncanny knowledge of the future and an insistence that Olive leave Earth immediately. The journalist’s name: Gaspery Roberts.

What struck me about Sea of Tranquility is how steeped in the genre it is. This isn’t to downplay Station Eleven’s singular take on the apocalypse or the David Mitchell-esque quality of The Glass Hotel, but neither of those novels get so lost in the science fiction weeds as does Sea of Tranquility. Mandel’s moon colonies might lack the hard-nosed authenticity of a Paul McAuley or Ian McDonald, but they’re not slapdash or generic, with Mandel adding in neat details such as the failed lighting system on Colony Two leav­ing the inhabitants with two weeks of sunlight and two weeks of perpetual night. I also appreciated how much of the plot was devoted to one of my favourite philosophical and science-fiction conun­drums, the ‘‘Simulation Hypothesis.’’ And while Mandel’s take on time travel does lean heavily on the typical tricks and tropes of that particular sub-genre, it’s executed in a manner that shows a knowledge of and adoration for the field.

Sea of Tranquility is also a very knowing novel. Via her alter-ego Olive Llewelyn, Mandel writes tongue in cheek about the experience of penning a hugely successful book. Given Ol­ive’s Marienbad is also about a world-ending pandemic, the humour here isn’t particularly nuanced, but it does allow Mandel to poke fun at Station Eleven. I chuckled at one fan’s frustra­tion with the narrative strands not connecting (‘‘I was just like, ‘‘Huh? Is the book missing pages? It just ended.’’) and Olive questioning the anti-climactic death of Marienbad’s antagonist, ‘‘The Prophet.’’ Mandel is doing more than just reflecting on the stratospheric popularity of Sta­tion Eleven, though. She is also coming to terms with writing a novel during an actual pandemic, one nowhere near as fatal as the Georgia Flu with its 99% kill rate but still potent enough to force nearly every person across the globe to stay inside. And as such, the most powerful moments in Sea of Tranquility deal with the emergence of a new virus that sees the inhabitants of Earth and the Moon colonies in protracted periods of lockdown – a state of affairs that resonates partly because it mimics what we’ve all experienced, but also because it’s a reminder that no matter how advanced our technology, we’re still reli­ant on measures that Daniel Defoe would have found familiar.

Sea of Tranquility isn’t as strong a novel as Station Eleven or The Glass Hotel. It lacks the thematic richness of those earlier two books. But it’s still a very enjoyable read, a book brimming with a sense of wonder, a sense of humour, and a sense for the weirdness we’ve all been experienc­ing over the last couple of years.