Just about everything in the hefty, appropriately titled Leviathan Wakes comes in twos, starting with the authors, since James S.A. Corey is the pen name for Daniel Abraham & Ty Franck. The large-type cover blurb from George R.R. Martin calls the novel a space opera, though the authors chose to exploit an underused niche in that genre’s range of setting options: a settled, industrialized, pre-starflight solar system several centuries hence. But middle-distance space opera is only half the story, literally and literarily. There are two protagonists, each native to and competent in his own environment, each with his own labeled viewpoint chapters and carrying his subgenre on his back.

The mostly space-opera sections of the story belong to Jim Holden, a former naval officer who has hit a career low as executive officer of the Canterbury, a ‘‘retooled colony transport’’ of the Pur’nKleen Water Company, bringing ice from Saturn’s rings to the consumers of the Asteroid Belt. His problems start when Canterbury answers a distress call that goes badly sideways and leaves him and a remnant of his crew facing a series of escalating and inexplicable events. Holden is a more-than-decent guy – in fact, he is morally inflexible nearly to the point of dysfunction, which is the cause of some of the trouble in which he finds himself and his crew, as various Powers That Be try to point him in directions he does not want to go.

Holden’s complementary opposite is Detective Miller, a hard-nosed, hard-drinking, morally flexible cop, well into the decaying-orbit stage of his career, working for the security corporation that holds the law-enforcement contract for the Ceres colony. His beat is the mean tunnels of this port worldlet:

A river of wealth and power unrivaled in human history came through Ceres. Where there was commerce on that level, there was also crime. Where there was crime, there were security forces to keep it in check. Men like Miller… whose business it was to track the electric carts up the wide ramps, feel the false gravity of spin fall away beneath them, and ask low-rent glitz whores about what happened the night Bomie Chatterjee stopped collecting protection money for the Golden Bough Society.

Miller’s part of the book, particularly in the first half, is very noir. Starting with an assignment to find and return an errant heiress (forcibly, if necessary), his situation progresses from merely unpleasant to ugly to hideously, civilization-threateningly dangerous.

The ancient capacity for tribalism has survived and thrived in this expanded human environment. There are tensions between Earth and Mars, and both look down on Belters out in the vacuum boonies, who return the sentiment with interest. This mix of rivalries, bigotries, exploitations, and misunderstandings already has the whole solar system in a cold-war dance when Holden sends a message that threatens to push it over the brink into a shooting war. Soon there are battleships headed for the Belt, riots in the tunnels, mysterious gangs of assassins spraying bullets, and even more mysterious, heavily armed stealth spacecraft taking on the Martian navy. And because the events that change Holden’s and Miller’s lives are linked, the pair wind up reluctant, untrusting collaborators, working on the same tangle of conspiracies, betrayals, corruptions, extortions, assassinations, rebellions, and cold and hot warfare that surrounds a McGuffin that turns the novel in a new direction halfway through, and which must remain behind the Spoiler Veil. (I kept wondering whether in the original architecture of the series this was two volumes.)

One ancestor of both of the book’s generic-thematic threads is Alfred Bester’s The Stars My Destination: the political-economic-cultural tensions between inner- and outer-system powers, the industrial grunge of the Belt worldlets, even some aspects of the McGuffin that comes to dominate the second half of the book. (And the Prologue that sets up Miller’s obsessive quest will ring a bell for anyone who, like me, baby-ducked on the Bester novel.) There is also a whiff of C.J. Cherryh’s industrial-military futures, in which off-Earth habitats are less like upscale shopping malls than factory towns that never let you forget that you live ‘‘in a stone bubble with your food, your water, your air shipped in from places so distant you could barely find them with a telescope.’’ Miller, pouring himself a glass of ‘‘moss whiskey… made from engineered yeast,’’ reflects, ‘‘The circle of life on Ceres was so small that you could see the curve. He liked it that way.’’

Another Besterian note – one shared with much SF from the Golden Age onward – is the strain of bright romantic yearning or idealism that runs through the darkness. It is present in Holden’s stubborn insistence on doing the right thing by his own sometimes-quixotic standards, and even the burnt-out case Miller catches glimpses of it:

Maybe Miller had gotten it wrong from the start, and the divide between the Belt and the inner planets was something besides politics and resource management. He knew as well as anyone that the Belt offered a harder, more dangerous life than Mars or Earth provided. And yet it called these people – the best people – out of humanity’s gravity wells to cast themselves into the darkness.

The impulse to explore, to stretch, to leave home. To go as far as possible out into the universe.

But we didn’t really come here for the fulfillment of the outward urge. We came here for space battles and encounters with low-life corridor scum and exposing the manipulations of corporate psychopaths and desperate searches for the last shreds of decency and heroic last stands and blowing stuff up, and there’s plenty of that to go around. Leviathan Wakes is an ingenious and absorbing (if mildly overweight) thrill-ride. 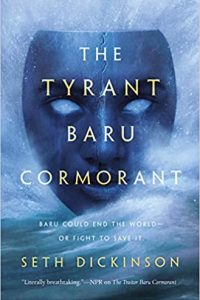