Kress was married to Michael Joseph Kress (divorced 1984) and Marcos Donnelly (divorced 1994), and has two adult sons. She married SF writer Charles Sheffield in 1998; he died in 2002. She recently moved to Seattle WA, home of her fiancé, writer Jack Skillingstead.

‘‘I wrote a lot for several years about genetic engineering, and I’d been trying to do it in fairly realistic ways. My novella ‘Act One’ is about an attempt – improbable, but not impossible – to reengineer the human race. (The same is true of the entire Beggar series, and a lot of the short stories.) But both ‘The Erdmann Nexus’ and (especially) Steal Across the Sky have a strong strain of mysticism along with the genetic engineering. I got a fair number of e-mails saying, ‘You can’t do this. All this life-after-death stuff doesn’t belong.’

‘‘‘Nexus’ is a little more logical, but it’s still about a floating consciousness in the universe that absorbs human consciousness after people die. Or I’ll put it another way: human consciousness can choose to leave this vessel and be absorbed, once there are enough of us for the consciousness to notice. I got a lot of flack, especially for Steal Across the Sky, but it’s a book I wanted to write, so I wrote it.

‘‘I knew going in it would be like that. My husband, Charles Sheffield, died in 2002. Writers think about death their entire lives, more than most people, but when it’s right there close you really think about it. It’s inevitable that death would find its place into my writing, and in Steal Across the Sky it did. Not everybody was thrilled with that.

‘‘In a way, I was working off Clarke’s Childhood’s End (which was the first science fiction book I ever read). There, it’s the children who are tapped for this large change and merge with an over-consciousness, and that never seemed right to me. Children don’t have enough time to develop a depth of consciousness. In a way, I deliberately inverted Clarke in Steal Across the Sky: it’s old people, who have lived long enough and accumulated enough (if you want to put it in a scientific sense) neural connections or (if you want to put it in a mystical sense) enough life experience, enough depth of consciousness, to be sought after by an over-consciousness.”

‘‘The people matter to me. For science fiction, I try hard to get the science right, but even though it’s about the future or technology, I still think the people – the characters – are most important. (Given that mindset, I might as well have written mainstream, except it just comes out as science fiction.) My method of writing is to become the character, to the extent that I can, and feel my way through how that person would behave. You don’t have a lot of control when you do that. Connie Willis and I were once on a panel, talking about characterization, and I was saying, ‘My favorite part of writing is when the character seems to take over the book.’ She said, ‘Wait, wait, no! The character doesn’t take over the book. You create the character. It only does what you say it does.’ All I can say is, it doesn’t feel like that to me. I usually know why the characters are doing what they’re doing. One thing I do have to keep control of is motivation, or I get lost.”

‘‘What bothers me about science fiction (including my own) is the way you tend to emphasize the negative, because fiction is about stuff that gets screwed up. As a result, even writers who believe in science tend to write what seems to be a negative on it, because it makes a better story. Usually, when you write about genetic engineering there’s a side effect that turns men into monsters or makes them die at age 20 or something. I’ve done that, but when I wrote ‘Beggars in Spain’ I wanted absolutely no downside. I wanted to write about a biological change in humanity that had no downside. The only way I could get a story out of it (let alone a trilogy) was to have the complications and the stuff that gets screwed up come from the social reactions, because you still have to have something go wrong. And I may still write about genetic engineering in a negative way, even though I believe in its benefits.”

Read the complete interview, and biographical profile, in the December 2010 issue of Locus Magazine. 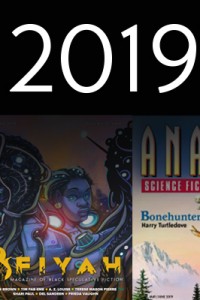