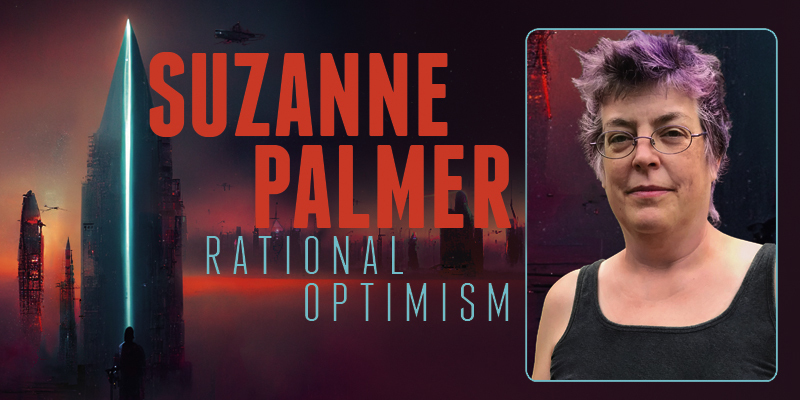 Suzanne Palmer was born in 1968, just outside Boston MA. She studied at the University of Massachusetts at Amherst, earning a Bach­elor of Fine Arts in studio art focused on sculpture. She began writing fiction seriously in 2001, and attended the Viable Paradise workshop in 2005.

She began publishing SF with “The Ins and Outs of Intergalactic Diplomacy” (2005). “The Secret Life of Bots” (2017) is a Hugo Award winner, WSFA Small Press Award winner, and Sturgeon Award finalist, while sequel story “Bots of the Lost Ark” (2021) is currently a finalist for Hugo and Stur­geon Awards. Other notable short works include Sturgeon Award winner “Waterlines” (2019) and nominees “Shatterdown” (2014) and “The Painter of Trees” (2019); and Eugie Award finalist “Ten Poems for the Mossums, One for the Man” (2016).

Palmer lives in western Massachusetts with her family, where she works as a Linux sysadmin at Smith College.

“I don’t see novels as a replacement for short stories, though, and they take different skill sets. There are ways you can experiment in short fic­tion that you really can’t with a novel. You can do things just because they’re interesting or cool, but in a novel you have to be careful that those same things don’t go on too long, become tedious, or lose their impact. Readers will trust you behind the wheel for a little while, but they want you to know how to balance between the wild ride and covering distance.

“My most recent story, ‘The Sadness Box’, I was trying to speak to the difficulty of being optimistic in a rational way, and that sometimes you have to be optimistic even when it’s totally irrational. A lot of that comes from, obviously, the world not being really conducive towards optimism right now, and a lot of traumatic or painful experiences in my own life, but you still have to tell yourself there’s a way forward. In the story, this kid is more concerned about his robot in a box being happy than he is thinking about his own state of mind, or his own circumstances. As a parent, you worry a lot about the world that your kids are going to experience or are growing into, more than you think about your own place in it. Or at least, the level of concern is very different. I lost both my brothers very young, which is very different from losing somebody at the natural end of their life, but it’s still something you have to process and incorporate into your world without letting it shut you down. You have to keep your empathy, even if it hurts sometimes.

“In terms of my writing process, I’m a total pantser and there are an endless number of things that spawn story ideas for me. I had joked with a friend who hates citrus fruit – I don’t know why – that I was going to dedicate my story ‘Tangerine Nectarine Clementine Apocalypse’ to him, which was a title I just made up on the spot as a joke, but then I was like, ‘Wow, that’s really good title. I should write a story to go with it after all.’ So I did. He was also afraid of spiders, so I worked that in there, too. Huzzah, story AND trolling!

“Sometimes that first seed is something as small as a title; sometimes it’s the characters; sometimes it’s something I want to say; some­times it’s a piece of science that I learned, where I think, ‘Wow, that’s really cool – what could I do with that that would be fun?’ There’s a big element of play in writing for me, but I don’t want stuff to be completely slapstick and shallow. I want there to be good science and I want read­ers to hit the end of the story and generally feel like, even if it isn’t an optimistic story or a happy ending, that there’s something you can walk away with – some piece of hope, or somebody doing the right thing, or a moment of joy. Some little glimmer of life.

“In ‘The Secret Life of Bots’ I was being a little sillier than I sometimes let myself be. I was in a good mood when I wrote it, but I was really trying to sell something to Neil Clarke at Clarkesworld. I’d had a couple of really near misses, and I knew I was really close, so I thought, ‘What does Neil like? He really likes robots, so I’m going to write a robot thing just to toss over the Clarkesworld wall.’ I don’t normally write things targeted that way. I’ve written a couple of things for antholo­gies, and that has been really fun and a good exercise, but that story was totally me trying to dangle a carrot in front of Neil. I wasn’t at all confident that he’d go for it, and I was really surprised at just how much people liked the story.

“I’ve always loved robots, myself, so that story and its sequel were fun to write, and I’m unreason­ably pleased with the pun titles. I’ve already got a start on a third Bot 9 story, which will be called ‘To Sail Beyond the Bot Net’. I hope that the sense of fun comes across to the reader. So there’s certainly going to be at least one more story, and then I’ll have to see where I’m at.

“For my day job, I’m a Linux and database system administrator for the sciences at Smith College, which is a great job to have as a science fiction writer, because you make friends with all the scientists and then they want to show you all their cool science-y things. The astronomers are like, ‘Let’s go look at the transit of Mercury.’ The physicists are like, ‘We have a bed of nails – do you want to try it?’ (Which I did, of course!) I have a computer science professor who does a lot of things with telepresence, and he’s full of interest­ing technology information. I do mostly backend computer stuff, so I don’t get too much of an eye directly into the science, but I love every time that window opens a little for me to get a peek at the neat stuff, and knowing that I’m an integral part of the science happening, and of the mission of getting more women into STEM fields.

“A lot of my short fiction is set in the same universe, and there’s actually a sort of black hole at the center, which is that ill-fated first novel I wrote that’s still sitting on my hard drive, hiding. The planet in the first novel I wrote was Zanzjan, which is where I got my ubiquitous social media username from. That planet showed up in one of the Fergus novels and, I think, in a short story. There are a lot of links between things, but Fergus and the main characters that are in my three novels have not been in other short stories. When I first started writing Finder, I was aiming for novelette length, and I had no idea what it was going to be about. I had this idea of a sort of cable car in space and asteroids tied together like space junk, and I thought that was an interesting environment to explore. I’d done something like that on a smaller level with a story called ‘Spheres’, which is one of my very first published stories that was in Inter­zone, where there are these habitats all connected to each other – like a trailer park in space, was what I was going for. The settlement in Finder is on a much bigger scale, but I started with just that one piece. ‘Okay, I’m going to make this cable car…. Now who’s on it?’ I came up with the two characters that the book opens with – a little old lady, and a guy visiting that place for the first time – and when I started writing, the story could have been about either one of them. I needed to have an excuse for there not being a lot of people on this cable car that’s basically public transporta­tion. ‘Why are there only these two people? There are all these crates taking up space. Okay. What’s in the crates?’ I didn’t know what the story was about yet or who it was about, and I just sort of ran with it. Originally, I thought the little old lady was going to be the main character, but I immediately got attached to Fergus, and then I did kind of blow the old woman up… Oops.

“The end of the story, when I was trying to keep it from turning into a novel, was going to be Fergus’s encounter with the alien Asiig and walking away from that after being changed – bit of a spoiler, I guess. But I couldn’t end it there, because too many other things were still in motion, and I needed Fergus to be the sort of person who wouldn’t just walk away. I had certainly never written a successful novel before, so I worry that that transition was a little rough, but of course I worry about everything anyway, because worrying is my personal superpower. I think the attraction with Fergus was him being this sort of loner who feels very alienated from everything but still – even though he doesn’t know it – wants to do the right thing, and he has all these people who are ultimately helping him. He doesn’t really think he has friends, but if he didn’t have friends, he’d never have survived.

“The third book, The Scavenger Door, came out last year. It was a three-book contract with option on a fourth, and we’re going back and forth trying to figure out exactly what comes next. I’ve got most of a fourth Fergus book written, but I don’t know if that’s going to be what ends up coming out, or whether it’ll be the first book of a new trilogy, or if I’ll write something else entirely, but I don’t feel at all done with Fergus. I have other ideas bumping around in the back of my mind – a standalone robot story that I’m accumulating lots of notes for, and a fantasy novel that I’m highly motivated to work on every single time I get pissed off at J.K. Rowling, which is frequently. I have about a quarter of a draft of that one written, but I’m not sure that I’ve got the tone right, because it comes off as slightly less serious than I want it to be. But I also don’t want it be too serious. 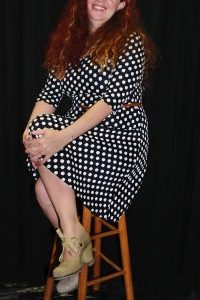