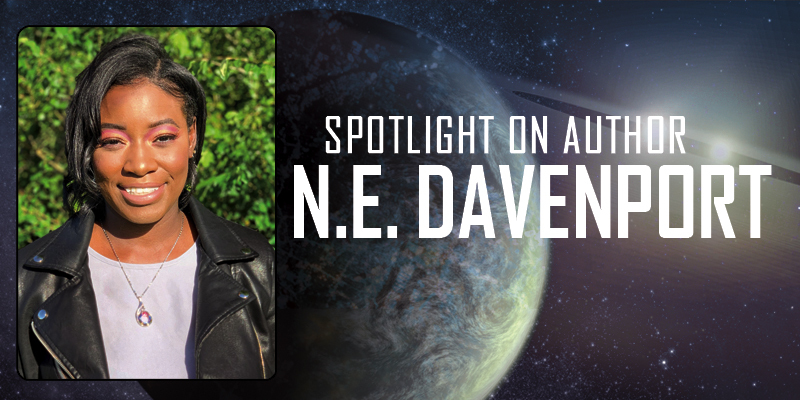 Nia “N.E.” Davenport is the science fiction/fantasy author of The Blood Gift duology. She’s also a member of the Hugo Award-nominated FIYAHCON team, in which she helped organize the SFF convention’s programming. She attended the University of Southern California and studied Biological Sciences and Theatre. She has an MA in Secondary Education. When she isn’t writing, she enjoys vacationing with her family, skiing, and being a huge foodie. You can find her online at <www.nedavenport.com>, on Twitter <@nia_davenport>, or on Instagram <@nia.davenport>, where she talks about binge-worthy TV, fun movies, and killer books.

Your novel The Blood Trials is a richly imag­ined science fantasy. Tell us a bit about the book: the world where it takes place, and the characters who inhabit that world.

The Blood Trials takes place in a secondary fantasy world where magic left behind by gods clashes with technological advance­ments. Rigid caste systems, bigotry, and misogyny are all the result of this clash. The protagonist is a young Black woman, Ikenna Amari, who experiences oppression due to her dark skin and the privilege of an el­evated caste due to her grandfather’s war hero status. When she finds out her grandfather was murdered by the ruling council he led, Ikenna enters deadly military trials to achieve the rank and power necessary to seek vengeance for her grandfather. However, Ikenna harbors an outlawed blood magic that the trials threaten to expose, and discovery will come with enemies beyond those that her skin color and gender earn her when she dares to enter the trials. Ikenna isn’t the only character who really shines in The Blood Trials. The story is told from her point of view, but there’s an ensemble cast of morally gray allies and foes that have their own growing pains, struggles, and ambitions.

You’ve talked elsewhere about how you wrote The Blood Trials to examine the worst prejudices that exist in our world. Can you expand on that?

Anti-blackness, unfortunately, exists across the world. Growing up and then living my adult life as a Black woman, I’ve encountered similar challenges to Ikenna. I’ve faced both macroag­gressions and microaggressions that question my humanity, right to freedom, and right to exist. Ikenna lives in a society that upholds antiquated beliefs about women and racist ideologies about individuals with darker skin. Not only is Ikenna told she doesn’t have a right to be ambitious, she is also told she doesn’t deserve basic rights. The only reason Ikenna enjoys some degree of privilege and full citizenship is because of her grandfather’s high military rank. Ikenna’s ex­periences in Mareen, her home nation, parallel the societal challenges and prejudices that many Black individuals have historically faced and continue to face today. The United States has a heinous legacy of slavery, brutality, and bigotry, which Black individuals still feel the effects of.

This is the first book in the Blood Gift duology. What’s the next book called, and what should we expect from it?

The next book is called The Blood Gift. It will be released April 18, 2023 in the US and April 13, 2023 in the UK. The conclusion to the duology is about the cost of war. The price Ikenna, her allies, and the wider world are asked to pay is steep. Due to this, Ikenna finds herself torn between her loyalties, her desires for revenge, and the divine power threatening to consume her.

The Blood Trials is your debut novel. Can you describe your journey from aspiring writer to published author?

I’ve always been a writer. From the earliest age that I can remember, I’ve enjoyed both reading and telling stories. I first decided to pursue pub­lishing a book in 2013. I read a ton of science fiction/fantasy, but I didn’t come across nearly enough titles with Black protagonists when I searched for them. So, I decided to write my own stories. From there, it became a passion and com­pulsion that I just can’t let go. These fantastical journeys, magnetic characters, and vivid worlds live in my head all of the time, and I just have to do something with them.

In addition to writing, you’re also a biology and English teacher. How does your experience as a teacher influence your writing, or vice-versa?

As a teacher, you also have to be a lifelong learner. My work as an English teacher often has me analyzing numerous narratives alongside my students. I never cease to find new gems of master craft examples during novel and short story units of study.

Who are some of your literary influences or inspirations?

I’m currently working on a Young Adult speculative thriller, Out of Body, which will be released Fall 2023 from HarperCollins. It’s a twisty story that I often describe as Altered Carbon meets Freaky Friday. I love writing in the adult SF/F space, and the young adult space is equally thrilling. 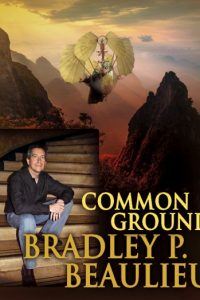 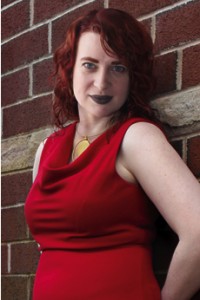