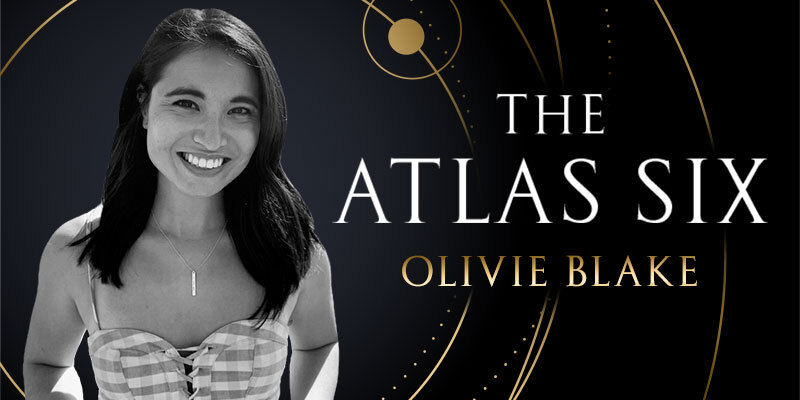 OLIVIE BLAKE is the pseudonym of Alexene Farol Follmuth, a lover and writer of stories. She has penned several indie SFF projects, including the webtoon Clara and the Devil with illustrator Little Chmura and the BookTok-viral Atlas series. As Alexene, her young adult rom-com My Mechanical Romance releases May 2022. She lives in Los Angeles with her husband, new baby, and rescue pit bull. Find her at olivieblake.com.

Tell us about your novel The Atlas Six, coming out from Tor Books in March 2022—the world where it takes place, and the characters who inhabit that world.

The Atlas Six is about the six uniquely talented magicians vying for initiation to the Alexandrian Society, a secret society of caretakers who protect and contribute to the archives of “lost” knowledge from the Library of Alexandria and on throughout history. In the book’s contemporary setting, the question of how to combat climate change is answered with magic, so the characters exist in a world where magicians, called medeians, are university educated and contribute to a system of capitalism much like ours. These particular six candidates each have a rare magical specialty and a myriad of personal motivations for pursuing the Society’s promise of wealth, power, and knowledge—which drives their tendency to want to kiss or kill any of the others at any given moment. (Two of them already hate each other and the rest of them are about to.) And there is obviously a catch to this extraordinary opportunity, which is that only five of the six are guaranteed initiation.

This book took an unusual path, starting as a self-published title before landing at a major publisher—and now there are plans to adapt it as a series at Amazon! Tell us about that journey.

It astonishes me more than anyone that this book took off the way it did. I initially wrote it for self-publishing while I was pursuing other manuscripts for traditional publishing—I thought there was no market for a relatively quiet, think-y fantasy that puts characters before genre, nor did I expect a publisher would choose to invest in a cast of sexually fluid magical academics with no clear hero or villain. I, however, was very interested in exploring an ecosystem of total moral ambiguity, so it has been a pleasantly baffling turn of events to find I’m not alone in that. (My editor at Tor, the brilliant Molly McGhee, is especially in my corner on that one.) Certainly there’s no question that dark academia is having a moment, so perhaps my isolationist approach felt appropriate for those of us gradually succumbing to the proverbial yellow wallpaper of our dystopian times. Cue the party-hat emoji!

The Atlas Six is the first book in a planned trilogy. Can you give us any hints for what the future of the series holds?

Ultimately this is a series that asks a lot of questions about who has the right to own knowledge, and whether possessing too much of it implies a responsibility to use it wisely or well or at all. Alliances shift constantly. Mistrust abounds. I take a lot of shots at capitalism, colonialism, and the military-industrial complex. But at the risk of totally abandoning my credibility, I love playfully comparing this series to the foundational delusion of The Bachelor—that isolating a group of people in a mansion will somehow lead to happiness and/or love (or, in this case, groundbreaking magical power). In reality, it mostly leads to conflict, and the innate humanity of that conflict is the heart and soul of these books. 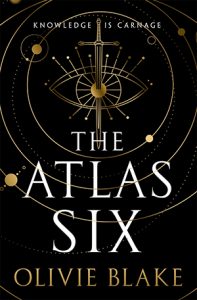 Your novel is about magic and secret societies (among other things). What kind of research did you do to create that world? What other works inspired you?

Ahhh yes, the magic in this world is deeply informed by quantum theory—I’m bookish by nature, but still, I’ve never willingly read so much science in my life. There has been Carlo Rovelli’s oeuvre on the nature of time and reality (plus a little Einstein for the palette), Guido Tonelli’s Genesis, The Tao of Physics by Fritjof Capra, Under a White Sky: The Nature of the Future by Elizabeth Kolbert, Man and His Symbols by Carl Jung, The Blind Watchmaker by Richard Dawkins, various theories on immortality, Mesopotamian creation myths…. Basically, every magical subject explored in the book stems from my own interest in what we might know or understand about the world if we had not had historical setbacks—you know, from imperialism or any of its friends—and what we could do with the answers to some of our most profound questions about existence. Which is to say, some pretty alarming things.

You had extensive experience in self-publishing before going the traditional route. What are the big pluses and minuses of both? Are there things traditional publishing could learn from the independent approach?

People tend to draw a very stigmatized line between indie and traditional publishing as if it has everything to do with quality, when really it has more to do with skill set. My goal was traditional publishing purely because I don’t want to be a one-woman sales department—I want to tell stories and rant about social issues and continue to assume that my various technological insufficiencies are the result of iron-averse fae blood or something. However, the freedom of self-publishing at this point in time is beautifully unparalleled—no gatekeepers, ample platforms for sales and social media, few financial barriers to entry, and the opportunity to retain 100% of creative decisions means that theoretically, marginalized and boundary-pushing authors can thrive. And because I started with fan fiction, I also had a small but willing audience—what more does an author really need beyond readers and a way to reach them?—so basically, I had access to the internet and a readiness to make that everyone else’s problem.

That being said, I was never interested in the logistics of book production, marketing, or sales, so I admit I was eager to abandon that part of publishing as a business. My editorial resources at Tor and the access I have to a team of extremely skilled professionals is far beyond what I could ever accomplish alone, and it’s true that the work is better for that. I love my team at Tor, who are without a doubt perfect for this book, and who exceed everything I could have possibly dreamed to have on my side. Still, the resources of traditional publishing remain pretty unrivaled, so despite my enormous good fortune, I hope its limitations (the ones that might have deemed this book unpublishable) are subject to evolution. Traditional publishing remains largely catered to the tastes of the straight, white, and/or male, so in that sense I hope this book’s unexpected success proves a trend rather than an anomaly. Traditionally published work may have greater credibility for bearing the fingerprints of bona fide tastemakers, but it is still just a matter of taste. I hope the lesson here, if anyone is taking notes, is that it’s worth taking a risk on unconventional stories.

You have a YA novel coming out this year too (as Alexene Farol Follmuth). Tell us about that!

I happened to write a short story about a female engineer a couple of years ago and was really moved by the conversation that followed between women who felt invisible in their STEM fields and women who, conversely, felt they were pushed out of STEM early on as a result of the exact same microaggressions plaguing the first group. Being a woman who “makes it” in STEM requires such exhausting toughness in the face of adversity that gentler things like excitement and curiosity are easily trampled along the way. As if being a teenage girl isn’t hard enough! Also, my husband is a high school physics teacher who told me I had a responsibility to bring more girls into science (and I figured I could do him this one small favor, as a treat). I had never written for young adults before, but I wanted to tell a story that was honest about the obstacles facing girls in STEM that also left room to imagine a better ending. Ultimately, My Mechanical Romance is about finding your voice and learning to take up your own space. But also, love. And robots. 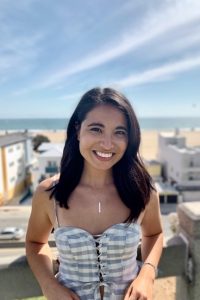 I think The Atlas Six really comes from my love of both quiet interpersonal dramas and the innovative, often subversive nature of speculative fiction. I was raised on Diana Wynne Jones, Patricia C. Wrede, and Tamora Pierce, and as an adult I’m as much a lover of Elena Ferrante, Zadie Smith, Ottessa Moshfegh, and Rachel Cusk as I am of V. E. Schwab, Tamsyn Muir, Silvia Moreno-Garcia, and Susanna Clarke. Authors who blur that line of literary and speculative like Carmen Maria Machado and Elisabeth Thomas are doing really exciting work in my opinion, and as a lover of things that make me go “whoa, that was weird,” I live for a genre-bending blend of philosophical and magical.

The Atlas Paradox, the sequel to The Atlas Six, is slated for an October release, which is beautiful and terrifying timing, but aside from that book, my other book, and the TV adaptation, all I’m doing in my spare time is teaching a wee little human how to exist. Very low stakes, really! 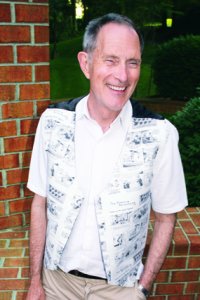