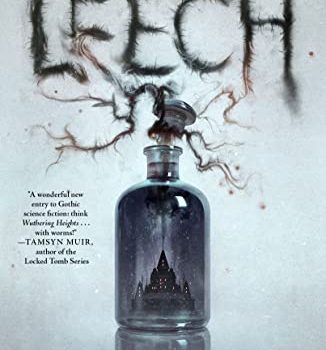 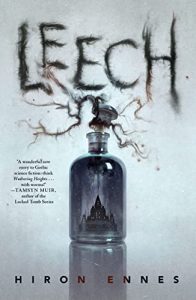 In Hiron Ennes’s debut novel, Leech, the far future has gotten really weird. Sure, there’s been extreme climate change – debilitating summers, isolating winters, and literal acid precipitation – no surprises there, given our current state of affairs. The wealthy few have grown wealthier, especially the Baron of the Château de Verdira, a northern province with a chokehold on mining “wheatrock,” a hard-to-define mineral that is somehow both edible and a valuable raw material; again, no shock to anyone paying the slightest attention to current affairs.

But the people who populate this Earth (at least, I think it’s Earth) have mutated (or evolved) into new subspecies, depending on the geography, with slightly different characteristics from one an­other – different enough that, in at least one case, a servant at the Château, the nonverbal Emile, who is one of the last of the gray-skinned, rat-tailed Montish people, is naturally immune to a new, sinister parasite that is quickly working through the rest of the population of the northernmost providence and threatening to spread throughout the world. Unless of course, the physician sent by the Interprovincial Medical Institute – ostensibly to care for the château’s ruling family, but who, by default, then treats the townspeople as well – can figure out the new parasite’s MO first.

Therein lies the first irony in this sprawling debut. The (initially) nameless doctor is, herself, part of a parasitic hivemind who, centuries earlier, took over the entirety of the planet’s medical community. Partly as a way to ensure its own continuity by caring for potential hosts, the doc­tors of the Institute are driven by a genuine desire to serve, to learn, and to protect others.

When we meet the doctor at the start, she has been sent north to replace the last doctor at the château, who died under mysterious cir­cumstances. It is not just that he suffered from a condition the Institute had never seen before, nor that this doctor chose to end his own life for undetermined reasons. This doctor, before he died, had somehow become cut off from the rest of the hivemind, while still alive, something that the Institute had never experienced before, with any host, since it took over the care of the hu­man population. It is up to the new doctor, who arrives just as the punishing winter descends onto Verdira, to determine not just the cause of death, but how and why this previous body has become unconnected from the network.

The institute is, immediately, a fascinating concept. The body horror comes quickly, but initially, one is struck by how astute a creation this is. Ennes has a background in pathology and medicine, and a medical borg, something we are already moving towards with the networking of medical records and quick dissemination of new medical breakthroughs, is an elegant creation in a post-apocalyptic world sans Internet to dig into the benefits – and pitfalls – of anyone, professional or not, having instantaneous ac­cess to information. This is, above all, a horror novel, so there is little time to revel in the astute prognostications. We’re quickly entrenched in a gross mystery, involving a dark, gooey, tentacled beastie who enters in through the eyeball… and whose exits are, say, less than pretty.

There are multiple stories woven throughout Leech. Not just, of course, the doctor’s hunt for the source and mechanism of this new competitor for the human body. There is also the darkness of the Baron and his family and the curse of the land and its original Montish inhabitants on the Château. Though the Baron himself has been reduced by age (and extravagant lifestyle) to a barking, unpleasant old man held together, liter­ally, by tubes, wires, and steampunk-sounding machines fashioned from salvaged materials, he rules over Verdira and its wheatrock mines with the same savagery he had as a young man – when he brought down a peasant revolt a generation ear­lier by, essentially, killing almost all the Montish citizens of the town.

As the new doctor begins to untie the ways in which all these smaller stories interconnect, she herself is infected, and finds herself excised out of the hivemind. Without connection, the memories and personality of her human host resurface, and she must contend with what happened to her, how she was assimilated into the Institute without her knowledge or consent, and what that means.

In very real ways, we learn as we move through the interconnected stories, the humans themselves are directly responsible for their entire state of being. The titular “leech,” the doctors of the Institute, were once human creations. The new parasite in town may be the direct result of the Montish “curse” and the reason that Emile, last of his kind, is the only person by the end of winter, not infected by it. In its own way, the new parasite, it is suggested, may bring about yet another new era for humankind, one which the doctors, with all their collected and collective knowledge cannot fight – the re-rise of the individual, of free will, and what is lost and gained when we take ultimate responsibility for ourselves. 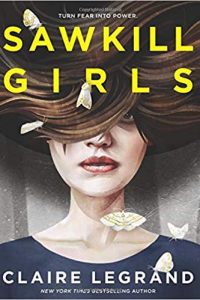 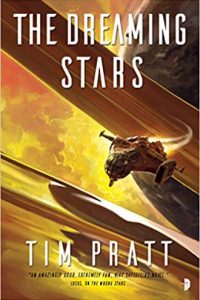